Before I announce my first pick for "Arianna's Reading" (aka the HuffPost Book Club), I want to talk a little bit about how I will -- and will not -- be making my choices. I'm not going to pick a book simply because it's the It Book of the moment that everyone is talking about or because some juicy or controversial excerpt is making news or because it's just been published. Instead, I'm going to pick the books that captivate and excite me, that make me want to run out and buy multiple copies to give to my friends. The books that make me pull out my pen and start underlining and writing in the margins (yes, I'm one of those readers!).

One time it might be a new release by an up-and-coming author, the next it might be a classic, like some of those chosen by our editors as a book that changed their life. It could be a novel, a nonfiction book on politics or spirituality, a biography -- or even the occasional guilty pleasure.

The main question is: does it make me want to start a conversation about it? Because your thoughts, feedback, ideas, reactions, agreements and disagreements are a key part of our HuffPost Book Club. I absolutely want to hear what you think of the books I choose -- and I want to hear your suggestions for other books we should be featuring.

Which brings me to my first "Arianna's Reading" selection: it not only fits the "book you want to curl up with" bill, its message has influenced the way I'll be making my picks. 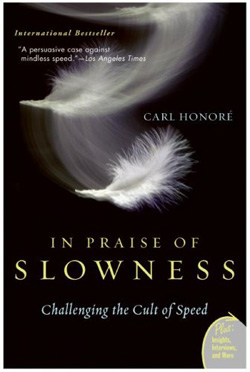 I'm reading (actually re-reading) and would love you all to read In Praise of Slowness: Challenging the Cult of Speed, a terrific book by Carl Honore, published by HarperOne in 2004, in which a self-professed "speedaholic" advocates the need for a more balanced existence.

"Speed can be fun, productive and powerful, and we would be poorer without it," writes Honore. "What the world needs, and what the slow movement offers, is a middle path, a recipe for marrying la dolce vita with the dynamism of the information age. The secret is balance: instead of doing everything faster, do everything at the right speed. Sometimes fast. Sometimes slow. Sometimes in between."

In the opening chapter, Honore, a Canadian-born journalist living in London, writes about the turning point that led him to become one of the godfathers of the (not so slowly) burgeoning slow movement. Nearly ten years ago, Honore was at the airport in Rome, waiting for his flight home, and talking to his editor on his cell phone. Like far too many of us, he says, at the time he was wired and harried, a "Scrooge with a stopwatch, obsessed with saving every last scrap of time, a minute here, a few seconds there."

As such, while on line and on the phone, to make his time even more "productive," he started skimming a newspaper. A headline caught his eye: "The One-Minute Bedtime Story." The article was about a volume in which classic children's books are condensed down to 60 seconds. Eureka, he thought to himself. As the father of a two-year-old, he saw the book as a great bedtime time-saver. As he started making a mental note to order the book as soon as he got home, he suddenly found himself thinking: "Have I gone completely insane?"

"Standing in that lineup," writes Honore, "I begin to grapple with the questions that lie at the heart of this book: Why are we always in such a rush? What is the cure for time-sickness? Is it possible, or even desirable, to slow down?"

Luckily for all of is, the answers are: yes it is possible, and yes it is desirable. And Honore has done a terrific job of showing the way.

I came to the book through a Eureka moment of my own. A couple of years ago, exhausted from working too much and eating and sleeping too little, I fainted, hit my head on my desk, broke my cheekbone, and ended up with five stitches over one eye. Determined to find some balance in my life, I took Honore's book with me on a trip to Greece.

The deeper I got into the book, the more I realized that I had had a towering example of the joys and benefits of slowness right in front of me for most of my life: my mother.

As I wrote in a column shortly after her death in 2000, she and I had an unspoken deal: hers would be the rhythm of a timeless world, a child's rhythm; mine was the rhythm of the modern world. While I had the sense every time I looked at my watch that it was later than I thought, she lived in a world where there were no impersonal encounters, and never a need to rush.

"The last time my mother was upset with me," I wrote, "was when she saw me talking with my children and opening my mail at the same time. She despised multi-tasking. She believed it was a way to miss life, to miss the gifts that come only when you give 100 percent of yourself to a task, a relationship, a moment."

And yet, in the years since her passing, I'd grown farther and farther away from the lesson that was her greatest gift. Reading Honore's book in Greece rekindled her spirit for me.

This is not to say that adopting slowness is easy. It's definitely not. And I recommend the book not because I've mastered it, but because I need its message reinforced. In other words, it turns out that, not surprisingly, slowness can't be mastered quickly.

One of the things I especially love about In Praise of Slowness is Honore's tone throughout. Far from a lifestyle guru who's preaching his enlightenment from on high, Honore himself is a pilgrim, trying to learn how to slow down and enjoy the journey. He takes us along for the ride while he travels the world, learning what novelist Milan Kundera called "the wisdom of slowness" and how it can enrich virtually every part of our lives.

We now have the Slow Food movement, which started in Italy and at this point boasts nearly 100,000 members. It emphasizes local food, sustainable agriculture, and taking time to enjoy not just eating meals but preparing them. We also have the Slow Sex movement, teaching Inner Slowness through meditation, the study of Slow Cities, etc, etc. And there is a lot the slow movement can teach us about how we bring up and educate our children.

Honore not only articulates the philosophical underpinnings of the slow movement, he also provides specific examples of how to incorporate it into our lives through such things as the directionless ramble, naps, and meditation.

Honore is not some easy-to-dismiss Luddite who wants you to throw your BlackBerry in the river. "This is not a declaration of war against speed," he explains. "Speed has helped remake our world in ways that are wonderful and liberating." But it can also become "a kind of idolatry."

Even though the main theme of the book is our day-to-day personal obsession with time, rereading the book this week I was struck by how much it also had to say about our financial crisis and the rethinking occasioned by the collapse of free-market fundamentalism.

"Modern capitalism generates extraordinary wealth," he writes, "but at the cost of devouring natural resources faster than Mother Nature can replace them. Capitalism is getting too fast even for its own good, as the pressure to finish first leaves too little time for quality control."

Under what Honore calls "turbo capitalism," people exist "to serve the economy, rather than the other way around."

So not only can we as individuals profit from the benefits of slowness, so, too, can our culture -- and our economy.

Please join me in reading -- or rereading -- In Praise of Slowness (And don't miss Carl Honore's blog post reacting to our picking it). And let me know what you think. Let's get the conversation going.

Get your copy of Carl Honore's In Praise of Slowness at Amazon.com or at IndieBound.