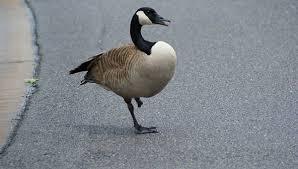 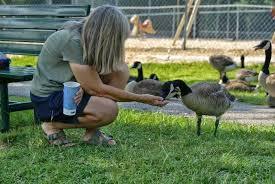 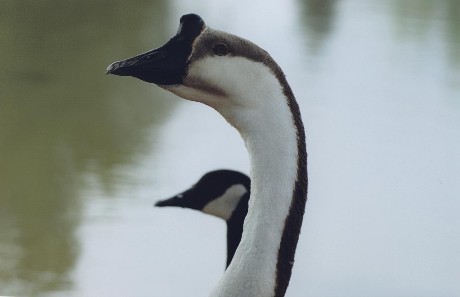 They trickle in, one by one, in pairs or droves. A few are veterans; others have traveled many miles to reach this prized destination in central Alabama.

It is the annual summer goose molt, a four-to-six-week interlude, when the nation's resident Canada geese are grounded until new wing feathers grow in.

The skies seem barren as an estimated 3 million geese take up temporary residence at parks, ponds and lakes across the nation from June through mid-August.

A few weeks ago, about 200 geese began descending upon Tucker Lake in Helena, near Birmingham. A few were thin, weary from long journeys; others in high spirits.

A surprising number were newcomers -- several groups of adolescents that seemed clueless as to how to behave in the presence of adult peers.

I have mixed feelings about the molt. This will be the fifth year I have suffered through it and while it is a chance to study geese under unusual circumstances, I have come to regard it as an ordeal.

It means reunions with beloved geese I haven't seen in a year. Crip, a gander with a mangled foot, arrived with his sister, as always, on Memorial Day, landing at my feet with honks of unrestrained joy.

However, the molt is hard on the geese. They become cranky, irritable, out of sorts as temperatures soar to 100 degrees. Their behavior is odd, and they are easily spooked.

They tend to band together in large groups -- and sometimes bolt for no reason. I'll be feeding them fresh grains (a morning treat) and suddenly the geese move, as if in a giant wave, toward the water. I look to see what caused the stir and find nothing. It's a mystery I chalk up to the molt itself.

The geese also mumble a lot. Half the time, they sound like bees. I don't know what the mumbling is about but I'm guessing it helps relieve stress.

The grounds are also littered with worn, frayed wing feathers that children collect. There is also an abundance of poop but park workers vacuum the grounds daily, keeping the park surprisingly clean.

Unfortunately, the geese also have something else to fear during the molt. The feds.

This is when the USDA's Wildlife Services goes into communities like mine and captures unsuspecting geese like Crip.

For several years, I investigated the agency's mismanagement of the nation's resident geese population. The story, published by McClatchy-Tribune News Service, indicates that taxpayers are subsidizing a $126.5 million program that annually exterminates more than 4 million wild animals, including thousands of often-beloved community geese in controversial (and, I might add, highly lucrative) roundups.

Every molt also has its stars and the current one appears to be Stumpy, who is missing a foot. She began flying in and out of Helena several months ago and has found a lifelong mate here.

There are also other geese I haven't seen in months.

To my delight, Auburn, a goose that is blind in one eye, showed up with a sister. Then came Horatio, a 10-year-old gander who was born here and whose parents let me help raise him.

There are also four sets of parents and it's not long before the goslings begin to realize their power, chasing ganders a dozen times their size without fear of retribution. No one dares provoke the parents, and risk losing a few tail feathers in the process.

The goslings don't seem to mind the heat. Nor does it stifle their appetites. They go after the grass like it was candy, and grow to love the grains. They also know that I sometimes have bread and hound me for it, checking my purse and pockets to see if a piece is stashed anywhere.

This year's molt also had its share of drama.

Finally, a few weeks into the molt, the blue quills that signal the beginning of the new flight feathers begin to appear.

Another week or two and the geese will be out of here. I can't wait. I will have to brace myself for the departure of Crip, who won't return until next Memorial Day. I allowed myself to become too bonded to Crip this summer, spoiling him with excessive attention and treats. I wonder where Crip goes the rest of the year, what mountains and rivers he crosses.

However, I rejoice that we have survived another molt. The geese are seasonably chubby, their feathers shine, and once more, we have kept the feds at bay.

Stumpy, who survived a federal roundup in nearby Hoover a year ago when residents asked that she be spared, will live to see another molt. So will Crip, Horatio, Auburn and all the other geese that have become part of our lives.

If you would like to start a chapter of Friends of Geese in your town or city or learn how to manage visiting geese populations with full community involvement, email or call Mary Lou Simms. The number is 205 267-2149; email mlsimms123@yahoo.com