Hackers defaced the website for the Florida-based GEO Group, the nation's second-largest operator of private prisons, calling the attack "part of our ongoing efforts to dismantle the prison industrial complex."

The domain www.geogroup.com was replaced Friday morning with a black screen headlined by the symbol "#antisec," a term for the Anti-Security Movement, which is affiliated with the online coalition known as Anonymous.

The hacked site also featured a photo of Mumia Abu-Jamal, a former Black Panther whose death sentence for the 1981 murder of a Philadelphia police officer has since been converted to life imprisonment. Abu-Jamal's case has received international attention from opponents of the death penalty.

"While most folks are suffering under the economy, many billions of dollars are being funneled into this sinister conniving alliance of capitalist and statist forces," stated a message on the hacked site. "What they did not figure into their plans was a determined effort to shut them down."

As of early Friday evening, the company had removed the messages, but the website was still down. A blue screen told viewers "This domain is under construction and will be available soon." A spokesman for the GEO Group did not return an email seeking comment. 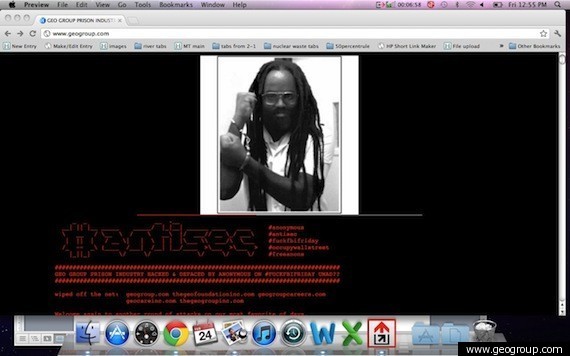 Private prison corporations, which profit through contracts to build and manage prisons for state and federal government customers, have been criticized by civil rights groups and public employee unions. More recently, companies such as the GEO Group and Corrections Corporation of America have been targets of the Occupy movement, which has ties to Anonymous.

Protesters throughout the country declared a "national occupy day in support of prisoners" last Monday. The #occupywallstreet tag also was listed at the top of the defaced GEO Group site on Friday.

Both the GEO Group (formerly Wackenhut Corrections Corp.) and Corrections Corporation of America have rapidly grown over the past few decades -- first during the expansion of state prison systems at the height of the "war on drugs," and more recently as the federal government has embarked on an unprecedented push to lock up undocumented immigrants.

The companies have been major donors to federal and state political campaigns. Executives from the GEO Group and its affiliates donated more than $800,000 to campaigns in Florida alone during the 2010 election cycle, according to the National Institute on Money in State Politics.

Republican lawmakers in Florida earlier this year pushed legislation that would have led to the largest expansion of private prisons in the nation. The GEO Group was actively pursuing the opportunity in Florida until the legislation was rejected by the Senate last week.