For the past several months, Rutgers University sophomore Dan Munoz has left behind hundreds of Post-it notes with inspirational quotes on campus.

As the notes began gaining popularity, the Daily Targum reports Munoz added a social media component at the suggestion of classmates, and now runs Tumblr and Twitter accounts to compliment his guerrilla project.

But Munoz has remained mostly secretive about his identity in the process. In fact, Munoz told the Star-Ledger that his family and friends do not know what he's be doing with the notes. He did a video interview with Rutgers Today, the university's news service, but kept his identity shielded.

"At the beginning, I liked the idea of being anonymous," Munoz told the Star-Ledger. He said he'd rather not be photographed or reveal his hometown because he wants the focus to remain on the inspirational notes instead of himself.

In an interview with Rutgers Today, Munoz explained he gets many of the quotes from blogs and then drops them around campus as he leaves a room or gets off a bus. A scan of the @RUPostIt Twitter account shows a range from Ralph Waldo Emerson and The Beatles to Winnie the Pooh.

Munoz told Rutgers Today the idea may get picked up soon at New York University.

"I got a message back from one guy, a person at NYU back in December, saying he wanted to start it there," Munoz told Rutgers Today. "That was my original goal and still is my goal for it to be done elsewhere."

At Rutgers, the Star Ledger reports the Catholic Student Association picked up on Munoz' style. According to the Daily Targum, CSA left Post-its with "you’re beautiful” and “you’re loved" around campus.

Check out some photos of the Post-it notes left on the Rutgers campus: 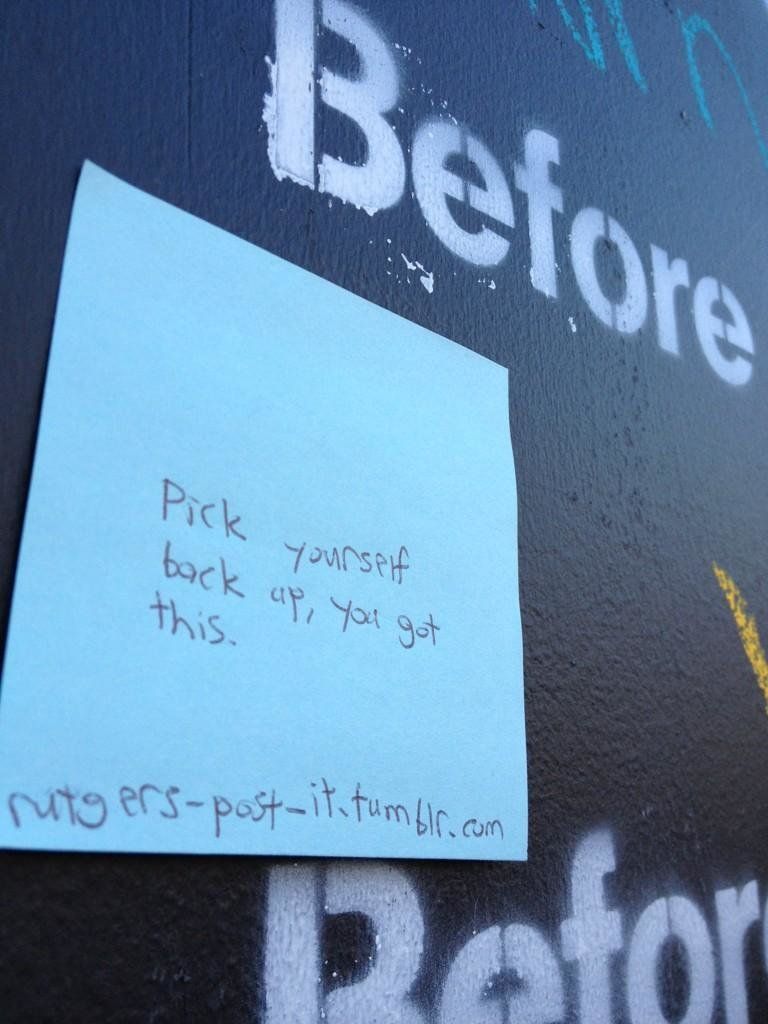