15-year-olds aren't supposed to have strokes. At least that's what I thought. I try not to think about it too much. Even now, I only have bits and pieces; shards of memories that somehow remained intact even through the trauma my brain endured that day...

For years, I'd been starving myself in order to take up LESS space in the world. I'd been taught by my own mother that strength came from mastering the wild whims of the body, controlling your instinctual urges, from proving you were stronger than others through stubborn will. And here was Diana... a woman who could hold all two hundred pounds of her sweet self up in a handstand with ease. A woman who inhabited her life-given figure with confidence, compassion and fierce femininity.

This article is an excerpt of my chapter in the newly published anthology, 21 Century Yoga: Culture, Politics, and Practice, edited by Carol Horton and Roseanne Harvey. In the remainder of the essay, I chronicle my personal journey, focusing on yoga's central and at times challenging role in healing from an eating disorder. I invite you to read the rest my chapter, as well as the eleven other phenomenal essays in this book, which discuss contemporary North American yoga and its relationship to issues including recovery, body image, and spirituality. You can learn more about 21 Century Yoga by visiting the website, and purchase a copy either in print or Kindle edition. 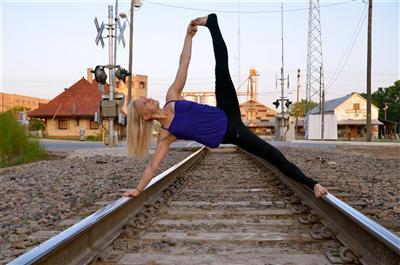 Your online destination for turning your intention into tangible action.