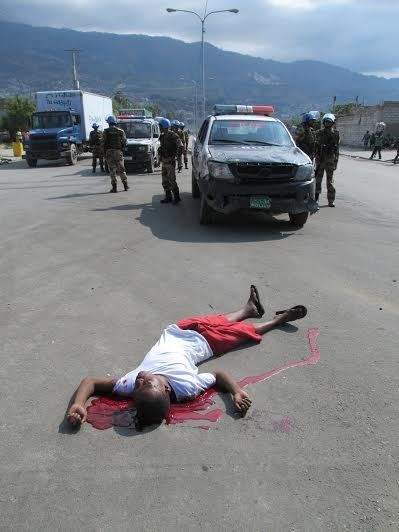 We will never learn of the names, lives and deaths of countless Black men and boys murdered by police -- and slavery enforcers, hate groups, vigilantes, and a host of others -- dating back to the earliest days of this country's history. The names and stories of a slew of recent victims of extrajudicial executions, such as Eric Garner and Michael Brown, and the exoneration of their killers, have become widely known through the blowback of public fury.

This is a tale of another Black boy whose name and wrongful death were never reported in any official document or national media. The policeman responsible was not charged, indicted, or prosecuted. This child's prematurely snuffed life was not spent in the U.S. but in the Black nation of Haiti, though the U.S. government subsidized his murderer.

In Port-au-Prince on a sweltering day last spring, the collective taxicab I was traveling in turned onto Bicentennaire Street, barely avoiding the prone body of a young teen. Arms thrown out like a startled baby's, he lay in a pool of blood. I spun around in the seat to look. A Haitian passenger, more accustomed to gritty daily reality, looked at me strangely. "What's wrong with you?" she asked.

One truck of Haitian police and two more of UN occupation troops next to the body raised my suspicion, as both parties have been responsible for incalculable harm.

I extricated myself from the crowded cab and ran to the scene. The boy had been shot in his skull and eye. The part of his T-shirt that was not yet covered with blood, which was still flowing from the holes, gleamed white. His mother or sister had surely recently hand-scrubbed that shirt with care.

A policeman told me he had been shot by a "bandit." A bandit robbing and shooting this boy was implausible: emaciated children from that destitute neighborhood do not circulate with riches. That he himself might have been involved in banditry was equally incredible: plastic flip-flops do not make good getaway shoes.

I began asking onlookers and street merchants if they knew what had happened. But two policemen followed me, and so no one had observed anything. As I continued my investigation up a dirt alleyway, one of the cops asked, "Where are you going?" "Just walking," I said. "Don't you need company?" he replied. They laughed.

At a bend in the alley, I ducked behind a tin fence before the police caught up with me and asked a man welding what he had seen. He said the police had driven up and then the shots had rung out.

Police brutality is a time-honored tradition in Haiti. Today, under fraudulently elected President Michel Martelly, the force's killings and abuses -- especially of demonstrators, activists, and journalists - are growing. Just this past Sunday, December 14, police attacked anti-government demonstrators in the capital city, killing one.

The U.S. has had a hand in taking down these Black lives. In the three years since Martelly was imposed, the U.S. has underwritten his unaccountable "security" forces to the tune of $73 million, courtesy of our tax dollars. The US has also sold the Haitian government weapons that make the assaults possible. (This same support has gone to many a Haitian autocrat, notably François and Jean-Claude Duvalier.)

Likewise, UN troops - globo-cops - have assassinated, raped, arbitrarily arrested, and committed other human rights violations during their ten-year occupation of Haiti. Moreover, the force is responsible for the deaths of more than 9,000 through cholera, after troops infected with the disease dumped their raw sewage in a river. When families of the victims filed a lawsuit for compensation, the UN claimed legal immunity. (The cholera lawsuit continues nevertheless.)

Haitian and UN forces are Daniel Panteleo, the NYPD officer who strangled Eric Garner to death as he placidly vended cigarettes on a sidewalk. They are Darren Wilson, the St. Louis cop who shot the unarmed teenager Michael Brown seven or eight times. These badge-wearers, and so many more like them, stand above the law.

The continual malfeasance, and exemption from accountability and punishment, of the Haitian police and the UN occupation force would be unthinkable, unacceptable, in a high-income white nation. However, those who control power and those with white skin typically respond to state-sanctioned lawlessness in low-income Black neighborhoods and countries by choosing to remain uninformed; ignoring the matter; or rewriting the narrative as gang activity, Black-on-Black violence, or common crime.

In the global division of capital and human value, a dead Black Haitian like the one lying on Bicentennaire Street is one more worthless body in a worthless life in a worthless piece of real estate.

Both the street-beat cops and the blue helmets are themselves predominantly low-income and Black or brown. They are pawns in a globalized system of political and physical violence, underpaid proxies helping to maintain dominance of the world's elite nations and classes. On the streets, they mirror on a micro-scale the unjust global relations, endowed as they are with personal power that allows them to be protected perpetrators of crimes on those more vulnerable than they.

Two ambulances joined the police and UN trucks. The officials sauntered between the vehicles, talking to each other. No one paid any attention to the blood-drenched body. The men wrote nothing, photographed nothing. Finally, gloved corpse-slingers approached and searched the pockets of the child's nylon shorts; they found them entirely empty. They tossed the cadaver into a litter and into the back of the ambulance. I suspected they would dump him in a potter's field, perhaps after a quick stop at the morgue, and that that would be the end of the story. I would have wagered a large bet that there would be no time spent preparing documentation for headquarters or for possible later identification by his desperate mother. I would have bet everything I owned that a forthcoming lunch mattered a lot more to those men than due process. Likely, this had been just another stop in a routine day.

Still, more public resources were being spent on the boy at that moment than throughout his entire life. Now, however, they were too late to be of any use to him.

Walking back home, I got caught in a wave of little children leaving kindergarten with their parents. They were a sea of blue shorts, blue pinafores, and blue hair ribbons. Which of them would be blown away by their government?

And which would grow up to be protesters in marches, and advocates in campaigns, like those going on all over the US now? Which would commit him or herself to a country in which everyone's husband, father, son, and brother - and wife, mother, daughter, and sister - have worth? And what country would they create?

As I penned this article under the drone of police helicopters that circulate every night from sunset until well past midnight above the interlocked towns of Oakland and Berkeley - both of them in full rebellion -- an email came in from a workers' rights group in Haiti. It read, "We are made nauseous by seeing assassination after assassination by the US police, with impunity, on any citizen - as long as they happen to be Black... and also by the complete protection of the corrupt justice system... We salute the mobilization of people in that country."

May the resistance and protest grow in strength. May they flourish into strategic organizing and sustained movement-building for physical security, economic and social equality, democratic rights, and government accountability vis-à-vis Blacks and other people of color. May this be so in the US and Haiti and everywhere that is sickened by the poison of structural racism.

A revised version of this article appeared as "Another Poor Black Boy Dead in Haiti", Truth Out, April 7, 2013.