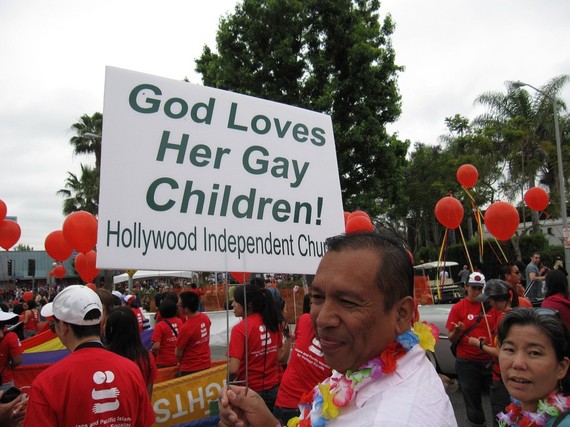 The suffering of extremely religious therapists whose faith calls upon them to turn away LGBT clients keeps too many of us awake at night.

Seriously, though, this is what Republicans, in Tennessee at least, think they should be spending their time on? Tennessee's not alone either. Mississippi and North Carolina have also passed laws recently that--in the guise of addressing such pressing issues as the freedom of wedding cake bakers and the supposed rash of bathroom gender impersonators--further demonstrate the Republican Party's obsession with discriminating against the gays. House Republicans, at least those on the Armed Services Committee, don't want to be left out of the fun either. One locality, however, takes the proverbial gay wedding cake. Oxford, Alabama will now punish an adult (other than one accompanying a small child) who goes into the "wrong" bathroom with either a $500 fine or six months in jail.

Here's the thing: Those policies are far from the top of the list of priorities our politicians should be addressing, at least according to the American people--and that includes conservatives. Gallup does a monthly, open-ended poll asking: "What do you think is the most important problem facing this country today?" The issue of religious liberty doesn't register at all, and the broader category of "religious decline"--even with Gallup lumping it together with "moral and ethical decline" (the latter of which could certainly include progressives and others who would recoil at anti-LGBT discrimination)--averaged only a few percent between January and April.

How about the question of how important the positions of the presidential candidates are to voters? Gallup tackled that one as well earlier this year, listing 15 issues and asking voters whether they considered them either extremely important, very important, somewhat important, or not important. For Republicans specifically, "social issues such as abortion and gay rights" scored second from the bottom. Only climate change scored lower, but that's an issue for another day.

Finally, another Gallup poll from this January found that 60 percent of Americans--including a majority (54 percent) of Republicans--are either very or somewhat satisfied with the "acceptance of gays and lesbians in the nation." That overall rate of satisfaction is up from 41 percent to 60 percent in just the last four years. This poll, remember, was conducted before the most recent spate of anti-LGBT laws, and thus reflects the environment after the Supreme Court decision recognizing marriage equality as a constitutional right.

Yet somehow, in state after state, Republican elected officials are pushing hard in the opposite direction, a direction even those voters participating in the GOP nomination contest seem to reject. That's what I've been thinking about this week, after Tennessee stepped up to protect the right of therapists to abandon all compassion.

As important as the passage of that law was, the biggest political story of the week was Donald Trump's dominant performance on Tuesday night--his victories in five out of five states and his capture of virtually all the delegates therefrom. So, is Mr. Trump in sync with the Republican-run governments of Tennessee, Mississippi, and North Carolina on anti-LGBT discrimination? Nope.

Late last week, Trump criticized the North Carolina law specifically, and characterized it as "discriminatory." He later added that the country had bigger problems to face and, although he called the matter something to be addressed by "local communities and states" rather than the federal government, he didn't change his personal take that the law was a bad idea.

Ted Cruz, on the other hand, thought he saw an opening, and attacked. He put up an ad that asks: "Should a grown man pretending to be a woman be allowed to use the women's restroom? The same restroom used by your daughter? Your wife? Donald Trump thinks so." It then plays a clip of Trump on the North Carolina law: "People go -- they use the bathroom that they feel is appropriate." Then the ad hits Trump again: "It's not appropriate. It's not safe. It's PC nonsense that's destroying America. Donald Trump won't take on the PC police. He's one of them."

Let's not touch the absurdity of calling Donald Trump politically correct. Moving on, Cruz apparently couldn't resist going further, offering the following last Sunday: "If Donald Trump dresses up as Hillary Clinton, he still can't go to the girls' bathroom." It's doubtful America's stand up comics are quaking in fear over their newest competitor for laughs.

Cruz has been making "religious liberty" an issue for a while now. He is advised by a "Religious Liberty Advisory Council," which helped him craft a 15-point plan chock full of goodies that essentially enshrine into law the fundamentalist Christian viewpoints on LGBT and women's rights.

For example, echoing the North Carolina and Mississippi laws that allow discrimination, the Cruz plan would "rescind Executive Order 13672 -- an order that requires certain federal contractors to not discriminate on the basis of sexual orientation and gender identity." In the name of religious liberty, he proposes to all but establish conservative Christian doctrine as our state religion.

How has Cruz's focus on sticking it to gay people worked out in the past few weeks? Oh yeah, he's had his clock cleaned six states in a row, while Donald Trump may well have locked up the Republican nomination. Nevertheless, Cruz is keeping this attack up in Indiana, where a Trump victory would likely seal the deal completely.

Make no mistake, Donald Trump is a dangerous man. I've called him a fascist. Saying that his views on LGBT discrimination are better than those of Ted Cruz is an awfully low bar to clear. My point is that he is winning the race for the Republican nomination because -- whether the GOP establishment wants to admit it or not -- he is the candidate most directly addressing the issues that Republican primary voters care about. Of course, his solutions -- from immigration to trade to terrorism and on down the line -- range from incoherent to horrifically destructive.

Nevertheless, unlike Ted Cruz and the GOP elected officials obsessed with sexual orientation and identity issues, Trump recognizes that most Republicans are scared of something other than which public bathroom people use.