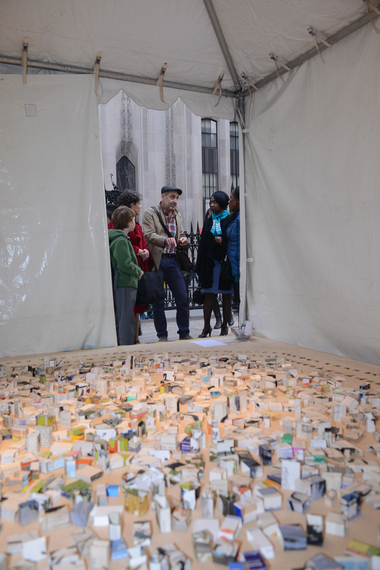 This Christmas at Trinity Wall Street we have two tents in the churchyard.

Within the tents are two delicate installations of waste paper formed into small boxes and burnt matches.

The artist Issam Kourbaj told us that the inspiration for these pieces called Another Day Lost came from an aerial image of a Syrian refugee camp in Jordan, and his practice in the evenings of burning a match to mark yet another day of the unrest in Syria. This violent conflict has driven 11 million people from their homes. We are at day 1,756, and there is no end in sight.

We asked Issam to install this work in our yards and on the walls of the Parish Center so that this Christmas we might be surrounded by reminders of the frailty of life, and the historic catastrophe that is happening this year on the other side of the world.

In Christmas we say God comes to be with us and takes the form of a helpless child in the Middle East.

Some might say that God, being all powerful, could have chosen to be among us in anyway God wanted, and chose this particular, vulnerable form.

The holy family are cast out as well. Liturgically, it's in a few weeks. It is at the Epiphany service that we hear that Herod is jealous of this new child who is being called a king and begins to seek to kill him. It is then that Mary and Joseph flee with Jesus to Egypt where they remain for years, the text tells us, until it is safe to return, and even then, they settle somewhere new.

Maybe we are supposed to remember the delicate nature of this life. Maybe we whose lives are so well fortified from vulnerability need a harsh reminder. We have matchsticks and paper from the trash fashioned into patterns that look like refugee camps for your Advent and Christmas meditation. May your heart be broken, wide open, this Christmas season.