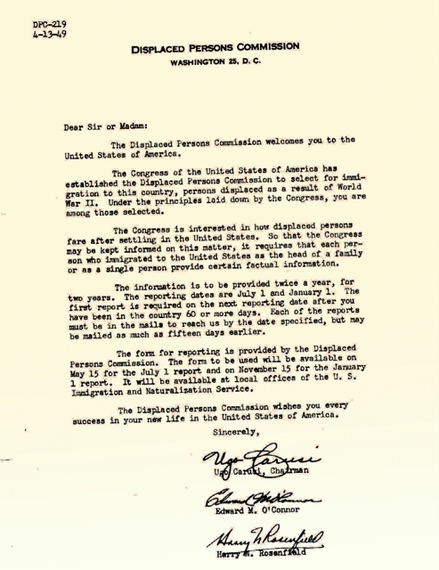 With all the Sturm und Drang surrounding the movement of displaced refugees -- and the hostile pushback from self-serving politicians -- I'm reminded of my own situation.

That reminder is in the form of an old weathered letter, smaller than the usual 8 1/2 x 11, and while it should have been given pride of place I actually squirreled it away for decades.


The Displaced Persons Commission welcomes you to the United States of America...

I was that displaced person and I don't have the slightest memory of having made the transit from Germany to the States. I was only a few months old. My late parents had spent hard time at Auschwitz and like the legions of today's refugees wanted and needed to get out of a country that was devastated by war. Although the combat had mercifully stopped the bad memories hadn't.

My father was an enterprising "survivor" and made enough black market money ferrying cigarettes and candy from Switzerland to Germany to afford a plane ticket (rare and expensive at the time). Our Promised Land destination was Brooklyn, New York.

My childhood years were filled with harrying tales of Holocaust survival -- it was the stuff of everyday chatter -- and while other families spent evenings entertained by TV shows like "Lassie" and "My Friend Flicka" our extended brood (those who had also made it out) were wringing hands while recounting grisly tales of Nazi handiwork punctuated, at key points, with emotive Yiddish expressions.

I'd try to shut off the noise; embarrassed as I was by their accented broken English and distanced myself from these memories. It was only after - way after - they passed that I started digging into the corrugated paper files that held assorted documents that I found the small letter.

The Congress of the United States has established the Displaced Persons Commission to select for immigration to this country, persons displaced as a result World War II. Under the principles laid down by the Congress, you are among those selected.

Watching news footage of the tens of thousands of displaced children hauled around like sacks of potatoes by displaced parents fleeing the mid-east carnage I wonder who among this new wave of refugees will be lucky enough to be "selected."

Listening to the "sky is falling" yammering of Republican Presidential hopefuls serves to regurgitate my own memories of being one of the displaced.

There was a similar backlash against the unwashed masses of Jewish refugees suddenly washing up on our shores after the War and clueless politicians also pounded the anti-immigrant drum. Congress had passed a relatively restrictive law in 1948 amid the hue and cry from those who feared that European immigrants might bring along some subversive ideas like Communism.

While our family did find a safe haven among fellow survivors even in this milieu there was discrimination.

My father was angry, feisty and quick to react. Auschwitz was a boot camp and like New York if you could survive there you could survive anywhere. He started an auto parts scrap business (a sort of Sanford without Son) and as he tried to make enough money to get us out of our three flight walk-up tenement he encountered downright hostility and much of it came from other Jews; ones who had been born here. My father's bullshit detector had refined itself enough to start sounding whenever he was being ripped off or made fun of and there were lots of opportunities for this to take place. Many in the community considered the tidal wave of Holocaust refugees to be either fodder for exploitation or simply low-class interlopers in the infinitely more established culture of the old-line Brooklyn Jews.

One day my father wandered into a local car dealership and asked in broken English if they had any old parts they wanted to sell. He was taken aback when a cop sitting off to the side (taking the usual break from actually having to work) started to laugh, punctuating his mirth with the comment, "too bad Hitler didn't kill all of you..."

Not one to shy away my father freaked, lunged at the cop and started to roll around the office pummeling - and getting pummeled - by this anti-Semite. Squad cars arrived in a flash, pulled my father away and ignominiously tossed him into a paddy wagon for the ride "downtown."

Now the irony: it turns out that the cop in question, believe it or not, was Jewish and obviously liked nothing more than to pick on his less-fortunate brethren. However, when news of the arrest filtered up the chain of command at the station house the Captain, seeing a possibility of bad press among other newly arrived Jewish immigrants, enlisted the aid of a police department rabbi to make things right. Right was dismissing the assault charges against my father and eventually expunging the case from the record. My father lost a front tooth in the kerfuffle and while searching through his archive I found his mug shot. He's grinning broadly, sans one front tooth, beaming with obvious pride.

My Displaced Commission letter goes on to ask that the head of the household supply "certain factual information" to the Commission on a regular basis because "Congress is interested in how displaced persons fare after settling in the United States."

Given today's very uncivil debate about how the newly displaced should fare I thought this was a very civil and polite sentiment.

The letter closes with:

Somehow, reading it now, I do believe they meant it.

While researching the background of the Displaced Persons Commission, established by President Truman in 1948, some interesting details emerged. Truman, the one-time Kansas City haberdasher whose business partner Eddie Jacobson was Jewish, clearly sought to imbue this body with his own views about immigration, resettlement and the value of the displaced.

These members of the Commission, hand-picked by Truman, were all political liberals and they, in turn, used every loophole in the restrictive 1948 law to make sure as many immigrants - myself included - could make it to these shores.

President Obama, along with like-minded colleagues in Washington State and Connecticut, are right to hold on to the moral high ground.

Joel Sucher is a writer/producer with Pacific Street Films. Parts of this post were drawn from "An Excess of Rage," written by Joel Sucher for the November, 2013, edition of the Hidden Child Newsletter, published by the Anti-Defamation League.