She came all the way from Switzerland to join the three-day hunger strike a block away from the United Nations. "They're my people and it is my cause," says Monel, a 60-year old nurse who did jail-time under the Shah and then clashed with the Islamic regime.

A few years after the revolution, Monel fled the country after being beaten in a rally to protest the new regime's imposition of conservative clothing that forced women to don chadors. "The fundamentalism became too repressive," she says.

"They stole our revolution from us," chimes in Essie Mohaddessi, 47, who landed from Sacramento last evening and hasn't eaten since the morning. The real estate developer left Tehran at 19 after becoming a nuisance for demanding the right to free speech.

Both Monel and Mohadessi made long trips because they want the United Nations to crack down on the Iranian regime; this means that chief Ban Ki-moon needs to appoint an investigative team to probe into human rights abuses and put pressure on the mullahs to release all political prisoners.

Do they really think that the UN is listening? So far, the world body has respected Iran's sovereignty by not interfering with the internal political turmoil and the treatment of its people. A medical resident from Seattle, Babak , says "UN can condemn but the Iranian regime would not give a damn." 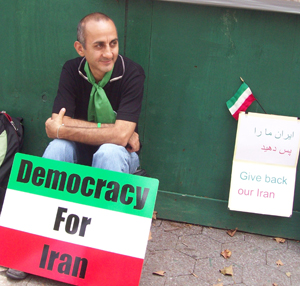 So did Monel come from Switzerland simply to go on a diet? "It is different this time because now the people decided to help themselves first," she says. "Contrary to popular perception I don't think the UN is ineffective," adds Mohadessi.

Important Iranian figures at the protest compared the situation to the recent visit by the Secretary General to Myanmar where he called on the junta's leader to deliver free and fair elections next year. He was not allowed to meet Nobel peace prize laureate and political prisoner Aung San Su Kyi.

After the visit, the Myanmar envoy told the Security Council that the military rulers were considering "amnesty to prisoners on humanitarian grounds" -- the details are still not clear. Let's see what happens.

"If he could go to Myanmar then why not Iran," asks Akbar Ganji, the country's leading political dissident who was released after spending six-years in prison. Ganji also added that the regime was not immune to "symbolic gestures." "If there had been no international pressure they could have also killed me."

Babak has his own theory on the matter. "Ahmadinejad won't step down and there will be no big change in the short term." But, the 35-year-old medical student says that the current upsurge is a practice ground for the next push for democracy. "The 1999 student movement led to this movement and this one will lead to the next big change," he says.

Everyone seems to be saying, "It's different this time" -- different because liberal and religious, rich and poor, old and young -- who have different ideologies -- bonded against a common enemy. "Previous movements have been undermined because of factionalism," explains Nader Hashemi who teaches international affairs at the University of Denver. 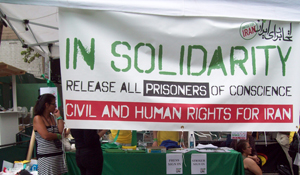 While this opens the door for change, it does not spell out what that change should be. Fresh elections do not necessarily mean that there will be more democracy in Iran. "There are huge tensions in the way forward," noted Hashemi, also the author of Islam, Secularism, and Liberal Democracy: Toward a Democratic Theory for Muslim Societies.

The renowned professor from Denver invited cheers from the crowd when he asked America and Israel to cease using "the politics of militarization" against Iran. His point was that the Iranians fight for democracy showed that country was deeper than Ahmadinejad and foreign policy could not be confined to, "should US bomb Iran?"

Most of all, the strikers came for the international media. The use of new media technology from Facebook to Twitter to You Tube, successfully turned the post-election turmoil into a live movie and getting past the government's attempt to create a news black hole. 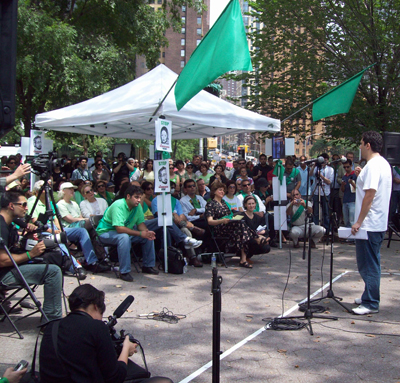 Would China look different if the students at the Tiananmen Square could twitter, asked Iranian scholar, Reza Aslan, at a recent journalist's awards dinner. "Tyrants stay in power by isolating their people," he said.

A graphic designer who was updating his blog and twittering about the strike, Mehdi Saharkhiz, felt that that media had done a bad job of covering the post-election turmoil. "Michael Jackson's death became bigger than the Iranian people." he said.

Until new media technology gets more organized, the rally highlighted the need for the good old TV crew and print journalists. "We are not just here for the UN but also the media," noted Saharkhiz whose father was kidnapped earlier this month and has not been heard from since. "Ahmadinejad and his people will be watching."

So, where does the hungry group figure in the maze of geo-political realities and the Westphalian garb of sovereignty? What if UN and Ahmadinejad don't listen to the hunger strikers? No matter! The power of a gesture should not be undervalued. "It's not about them, this is about us," says Babak. 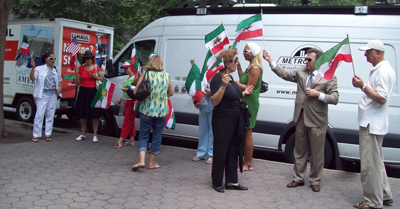