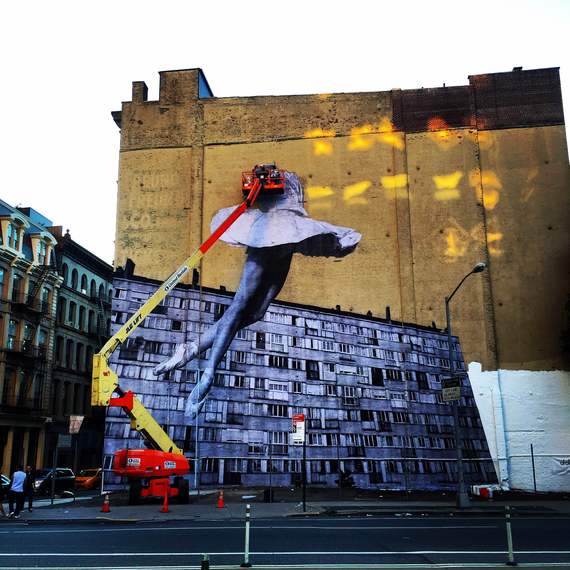 Around 6 PM on Wednesday August 5, I left my job near the World Trade Center and headed up 6th Avenue on my bicycle looking for a place to get some air in my tires.

From there, my plan was to cross the Williamsburg Bridge, catch the sunset on the Brooklyn side, then pedal south and be home in Carroll Gardens by 8 P.M. or so.

This little trip home was totally mapped out in my head.

But sometimes roundabout bicycle rides get cluttered with magic encounters and enchanting visuals that connect me in a personal way to the community we call New York City.

Pedaling up 6th Avenue, I remembered that I wanted to stop and see a wall where workers had been installing what one day earlier was a headless, five-or-six-story-high ballerina. Her tutu and slippers suspended mid jump, the dancer is the main character in a giant photograph on the side of a building just south of Canal street. I figured by now, she'd have her head, so I wanted a picture for my instagram.

She did. What I could see of her face seemed regal. After a few minutes snapping an instagram shot, I headed east to Centre Street, made a left uptown and rode through Chinatown.

Golden afternoon sun bathed the crowded sidewalks along Canal Street that were filled with people buying and selling. It was August in Manhattan so the smell of fish permeated what few breezes blew. Double decker busloads of tourists, some taking selfies inched through the rush hour traffic. Honking horns and revving engines competed with frantic arm waving traffic cops who barked orders then blew their whistles.

"When riding a bike you're much more connected to the world around you. You see, hear, smell and feel everything, good and bad, unlike in a car where you are separated from the living world by metal and glass. You tend to have a heightened sense of awareness, you notice the little things," said Sam Greenman, Product Manager Schwinn Bicycles in an email note a few days after my ride.

And it's certainly more efficient way to cover a lot of ground in the city.

"In only a couple hours you can cruise the Brooklyn Bridge, roll through Chinatown, pass by Tribeca and up the West Side Hwy bike path along the Hudson all the way to Central Park," said James LaLonde, Global Marketing Manager for Cannondale Road.

I cut through the congestion and stayed on Centre Street past Little Italy then to Lafayette where my eye caught another giant black and white photograph plastered on a wall. The image depicts a rock climbing dangling from a cliff with by one arm. Next door to the rock climber was a New York City Fire Department firehouse.

Just as I was snapping a pic of him with my phone, a door swung open and out came a fireman.

"Why does everyone love that big picture so much?" he said with a tone of bemused curiosity, as he looked up.

I'm not sure, I said slowly.

With that, he smiled and walked back into the firehouse.

The intersection and the cab driver

I got back on my bike and headed up to the traffic light at Spring Street. Within a few seconds, a collection of six, maybe seven cyclists had joined me all waiting for the light to change. The crosswalk was thick with pedestrians, some chatting with each other, many walking with shopping bags in tow, texting, sexting, others just walking. We all had one thing in common.

All of us were heading some place else beyond this little stretch of street. And the likelihood any of us would remember this otherwise mundane moment was pretty nil.

But then, I heard a voice.

"You ride fast!" said the man in what sounded to me like a Caribbean accent.

I turned back around and saw a rotund gentleman sitting at the wheel of a Yellow Taxicab. He was wearing a cool black leather vest over a white tee shirt, a couple of nice silver rings and looking right my way, smiling big and featuring two gold teeth front and center.

I smiled back and with complete confidence asked, "You think?"

He said "yes!" this time slowly his voice cracked up an octave higher. "I saw you down on sixth, taking the picture, now you are here before me, yes, you are so fast!"

I laughed and said that's right I am!

And then I blurted out a rhythmic, "Well, I get around!"

The driver laughed loudly. The other cyclists smiled. Two or three seconds later, the signal changed to green and the rotund man in the cab was gone and like two-wheeled quicksilver, all the cyclists scattered as well.

A bit further up Lafayette, I found the bike shop and got air.

With newly firm tires, I zipped through the East VIllage, took a cross street east then a turn right towards downtown and finally landed at Chrystie Street and Delancey.

To the east on Delancey sits the WIlliamsburg Bridge. Construction for this majestic suspension bridge finished in 1903 and nothing's been built since that touches its transit brilliance. Towering gray steel beams and cables extend into the sky giving the bridge the appearance of some sort of giant industrial harp.

Running through its center, a pink cage-like encasement surrounds the bike and pedestrian pathways. Just beneath the pathway, subway cars rumble enhanced by the slick sound of automobile and truck rubber meeting pavement, all this sets a rhythm for the bridge.

While pedaling across, a few impressive "pieces" of graffiti struck me as clever enough to instagram. Faces that say Looney Tunes or big splashy old school tags that remind of 1970's era movies shot in New York I watched growing up in Alabama. 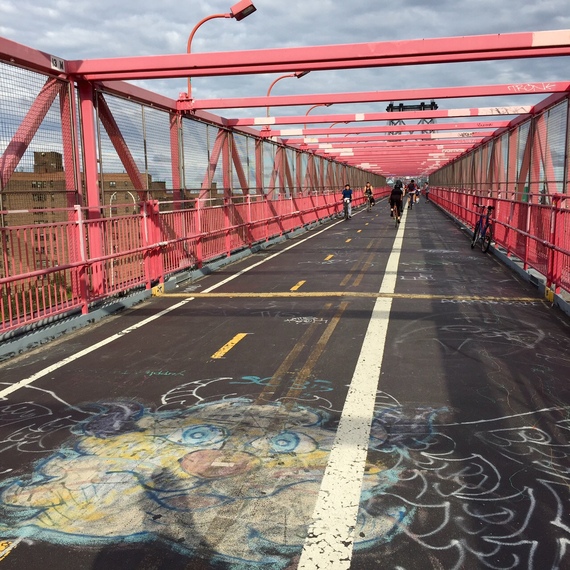 Then, for a for a New York minute, I wondered if there'd been any quiet blessings from our progressive City Hall that encourages unofficial "art" on public spaces like the Manhattan or Williamsburg bridges.

The short answer is no.

But does that include work by artists like the world famous Banksy? What if Banksy wanted to use the bike path on the Williamsburg or Manhattan Bridge as a canvas for a thought provoking piece? Would the city remove that too?

It doesn't matter who paints it, said the spokesman. The city does not discern between artists when it comes to graffiti removal. Besides that, he said a lot of the more interesting stuff ends up on private structures at the behest of a building's owner (like the ballerina and rock climber).

And maybe it's a good thing the city removes all the graffiti periodically. Some might say it clears the public canvas for the next artist Much like New York City, cleaning the canvas pushes the city to constantly evolve, evoke and strive for constant reinvention.

The pedestrian and bike paths meet

Midway across the bridge, there's a path across the subway tracks from the pedestrian to the cyclist sides. People often chill and snap pics here since there are spectacular views of the subway trains just below.

Two twenty-something looking types were sitting at the space. They eyed me with three shots ominosity and one part sugar when I pulled up. Part of pink fencing in front of them was covered with trinkets and folksy looking crafts, as if an outlaw art gallery had set up shop there.

Then one of them jumped up on a guardrail and took pictures of a tiny little tropy of a teensy police officer firing what looked like a gun at a tiny speeding bicyclist. Later, I tried to snap it with my phone.

After snapping a pic of an approaching subway train at the foot of the bridge, I rode down to Kent Avenue where the shell of the Domino Sugar Refinery stands. In an adjoining empty lot, some sort of a festival was on. Women wearing flowy dresses and men with beards and spiffy shorts were headed to the lot at 302 Kent. Finding a place to lock my bike was challenge.

When I walked up to one of several young women standing the entrance, she asked, "are you here for the meditation festival?"

I said no although meditating sounded great, I just wanted to have a look. They said "of course!" My goal was to get a picture of the old building before it gets developed into luxury commercial housing.

Curbed New York explained this past July that during "the downtime before construction starts at the Domino Sugar Refinery site, the empty lot that formerly housed the massive refinery building has given rise to--wait for it--an organic farm."

Skeptical me saw this garden as a temporary ass kiss measure by the big project's developers, Two Trees Management.

But with its pristine rows of baby vegetables and a skate-board park, all of it featuring splendid views of the bridge and Manhattan, I was enchanted by it all in no time.

As I admired the vegetables and the pre-meditation bliss on everyone else's face, I spotted a small sign near some rows of what I think was spinach.

I crouched down and took another instagram shot and two young women walked up to me, and one of them said, "oh how cute, now that's a sweet picture!"

I smiled and took in more shots of the sunset and the bridge. It was at that moment, I realized that in just two hours, I'd tapped into the soul of this lovely magic city I call home. Around 8 P.M I was pedaling south, on my way to Carroll Gardens. 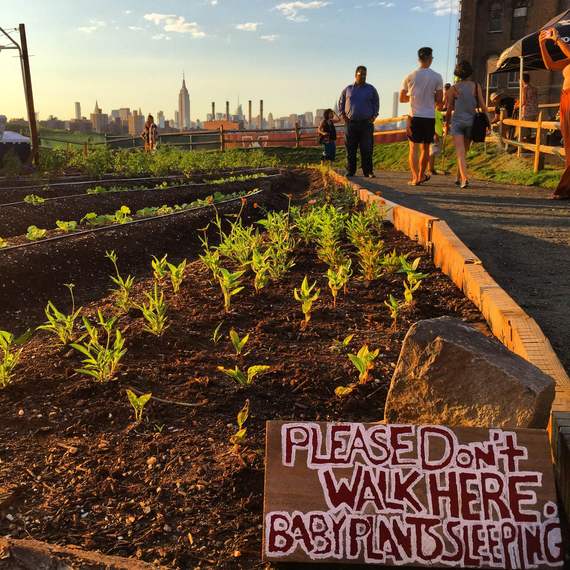