I recently came across an article touting the benefits of meditation as an anti-aging therapy. Since the piece was in the Fashion Times, I thought I'd do some digging. The story referenced a recent study by Dr. Elizabeth Hoge, a psychiatrist and researcher out of Harvard who studies biological changes in the body resulting stress and trauma. Her work seemed like a great place to start. 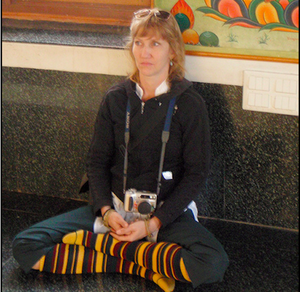 Could I look more like I don't belong in a meditation temple?

Dr. Hoge's study found that people who meditated daily for at least four years had longer telomeres -- the protective caps on the ends of chromosomes -- than people who do not meditate. Short telomeres are believed to be markers of accelerated aging.

In a 2012 study out of UCLA, neuroscientist Eileen Luders reviewed brain-imaging studies to look at brain-aging differences between meditators and non-meditators. The participants in these studies had meditated for two to 35 years. In the studies Luders reviewed, meditators showed less age-related decline in the thickness of their brain's cerebral cortex.

Then in 2013, a study out of the University of California San Francisco found that women who could focus on the present moment, as opposed to allowing their minds to wander, had longer telomeres. Furthermore, mind wandering added an additional four to five years to the women's cellular age. Focusing on the present moment is a hallmark of any meditation technique.

But Is Re-Wiring Really Possible?
Then I came across another study, this one out of Penn State, suggesting that stress in childhood is also a factor in telomere shortening. This seemed like a chink in the findings -- no amount of meditation can change your childhood. Besides, aren't participants in these studies a rare lot? People who've been meditating for two or four or 35 years are a self-selecting group. Though the selection might have less to do with a predisposition for wellbeing than a desire to heal from unhealthy lifestyles.

Most people don't turn toward contemplative practices because their lives run smoothly. In my case, I started meditating in my 20s, after a stint in rehab. Despite a rocky start, I've been complimented for looking young. (As well as hated on. Last year I produced a yoga workshop -- "Yoga for Getting Over It," showing how yoga helps physically release trauma in the body -- and the video went vaguely viral. The Internet weighed in. Comments ran something along the lines of, with enough botox anyone can look like the got over it!) 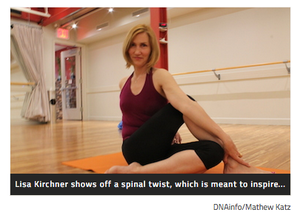 The video has been removed, but here's a link to the original article.

For the record, I haven't had any Botox. Nor was I a clean-living yoga practitioner my whole life. I didn't start seriously practicing until 2005, and I smoked right up until I went to India in 2006 at the age of 40.

Stress, It's In The Eye Of The Beholder
Obviously stress plays a major factor in aging. As Kelly McGonigal suggests in her amazing TED Talk, our attitude toward stress is the key factor in its ability to harm us. The beauty of meditation -- besides the fact it's free and anyone can do it -- is its demonstrated capacity for reducing stress. It's not that we stop having it, it's that we don't react to it in the same way.

This process doesn't have a clear end, it's ongoing. If you have any draw to the practice, move toward it. You can start by simply starting to pay attention to what's happening in any given moment.

Even if you feel skeptical, you know on an intuitive level -- bitter does not age well.

If you are already on the path, tell me in the comments below if meditation as an anti-aging strategy rings true for you.