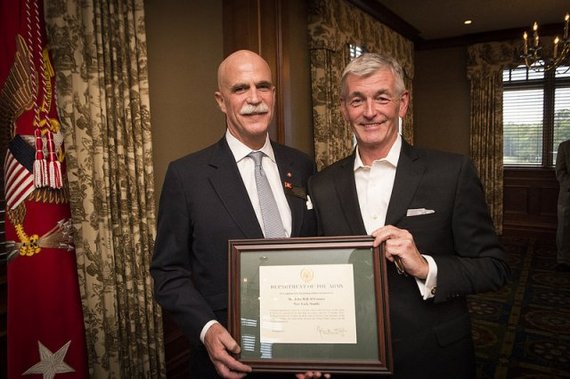 (John O'Connor [left] at a ceremony conducted at the Army Navy Country Club in Arlington, Virginia.)

Most of us have a story about 9/11 and John O'Connor is no different. "It was a life altering day," said O'Connor. "I was sitting at my desk at J.P. Morgan on Sixth Avenue and we had a direct southern view of the towers when it happened. Not only did I lose friends, but I was serving on the lay board of St. Patrick's and saw the sacrifices made by too many police and firefighters at their memorial services." Mr. O'Connor reached out to then Secretary Rumsfeld and asked how he could help.

O'Connor served on numerous advisory boards, panels and commissions, and in November 2014 he was selected by Secretary of the Army John McHugh as the CASA (Civilian Aide to the Secretary of the Army) for New York, representing the southern areas, including New York City, West Point and as far north as Albany. The Army has appointed CASA's in every state to provide a link between the military and the public to promote good relations.

Military bases have become self-contained communities with their own schools, stores and other facilities and as a result civilians and military personnel have less and less interaction. "People don't understand who their military is, what they do or how they're governed and organized," said O'Connor. His goal is to visit all the camps, posts, bases and various military installations under his jurisdiction. "Military bases are centers of economic activity, and they're very important politically, but they are losing their connection socially. An important issue for me is to close this gap," said O'Connor.

O'Connor attributes this to the fact that civilian society has been kept at distance from the military and doesn't understand or appreciate the skills and experience that veterans have gained. He plans on changing this through "shoe leather and kitchen table interaction."

One of the positive changes in our country is that it's finally acceptable to support the military -- Tom Hanks and Bruce Springsteen both participated in Concert for Valor in 2014 -- yet more than ever, we seem to know less about our soldiers and what they do. We have an army base - Fort Hamilton - in Brooklyn, yet most people who live in the five boroughs have no idea it exists. John O'Connor is helping to change that. "I feel privileged to be a part of this," he said.