As the director of Marvel's most recent summer blockbuster, Peyton Reed has a lot to be thankful for these days.

"Ant-Man was a fantastic experience. The cast was amazing," Reed admitted during a recent phone call. "I'm really pleased with the way the finished film turned out. And I'm hoping that we get to do a follow-up." 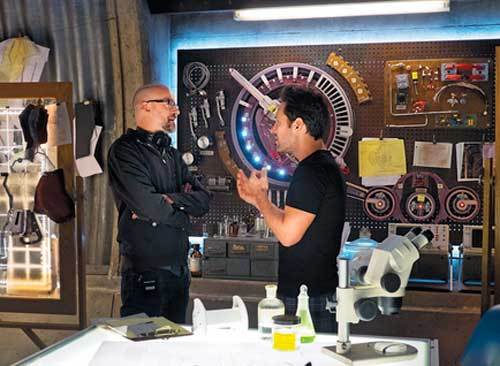 Mind you, 20 year ago, Peyton wasn't who Studios hired to helm their effects-filled franchise films. He was the guy you hired to create the Special Features that then got tacked on to the VHS version of these sorts of movies. Behind-the-scenes featurettes like "Through the Eyes of Forest Gump" and "Secrets of the Back to the Future trilogy."

Speaking of Back to the Future: Back in the early 1990s, Reed co-wrote Back to the Future -- The Ride. And given how hugely popular that theme park attraction was when it premiered at Universal Studios Florida back in May of 1991, Walt Disney Imagineering sought Peyton out and offered him the opportunity to direct certain elements of "Honey I Shrunk the Audience." And that project turned out so well that Mouse House managers then asked Reed if he'd be interested in helming some TV movies for ABC's "Magical World of Disney."

"At that time, Disney was looking to take some of the films that the Studio had made back in the 1960s & 1970s and reimagine them as TV movies that then could air on the Disney Sunday Night Movie. And given that I'd grown up watching 'The Wonderful World of Disney' every Sunday night on NBC -- more importantly, that I'd seen a lot of those movies when they were originally released theatrically (I think that Disney's The Love Bug may have been the very first film I ever saw in a theater), I jumped at the chance to be part of this project," Peyton enthused. 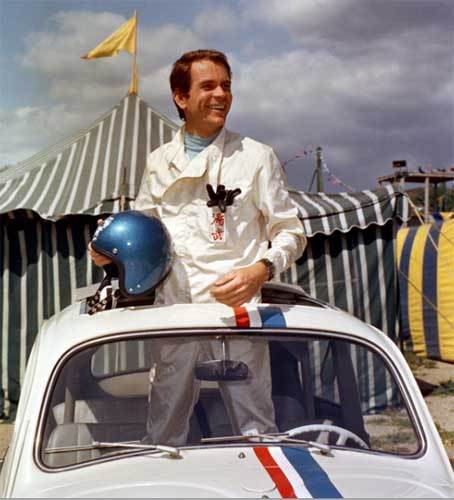 Which isn't to say that Reed was immediately given the Keys to the (Magic) Kingdom. These TV movies for ABC's "Magical World of Disney" were made for very little money ($2 - $3 million each) and on a very tight production schedule.

"It was 20 days of prep, a 20 day-long shoot and then 20 days of post. That was fast," Peyton recalled. "But I loved making these TV movies. They were really great training for a new director like myself in terms of learning to be prepared and then having to pull together a quality finished product really, really fast."

But while that 60 day-long production schedule was set in stone by studio execs, Disney did give Reed considerable leeway when it came to casting these TV movies. Which is why he & Allison Jones (who is now known for the brilliant work she does casting Judd Apatow & Paul Feig's projects. But -- back in the mid-1990s -- Jones was just getting started in the biz) really went to town. Loading up the first TV movie version that Disney had hired Peyton to do (i.e., a reboot of that 1969 Kurt Russell vehicle, The Computer Wore Tennis Shoes) with up & coming comics as well as veteran character actors. 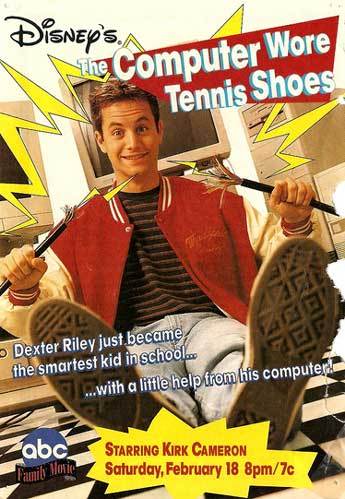 "So if you look closely at the cast of 'Computer,' you'll see people like Jeff Garlin from 'Curb Your Enthusiasm' at the very start of his television career. But at the same time, because Allison & I are such huge film nerds, we cast Charles Lane as Regent Yarborough. And Charles' career goes all the way back to Frank Capra films like Mr. Smith Goes to Washington & It's a Wonderful Life. Not to mention his work in television on shows like 'I Love Lucy' and 'The Andy Griffith Show,'" Reed enthused. "If memory serves, Charles Lane was 90 years-old when we shot 'The Computer Wore Tennis Shoes.' That was the very last work he did on camera. And Charles was fantastic. Still really sharp and funny."

But given that Peyton was directing this Computer Wore Tennis Shoes redo for Disney and given who starred in all those movies that Reed had seen as a kid ... Well, there was just no way Peyton could proceed with this production without reaching out to Dean Jones. Which is why Reed was thrilled when Jones agreed to play the villain in this TV movie (i.e., Dean Carlson, who tries to woo Dexter Riley [played by Kirk Cameron of "Growing Pains" fame] away from Medfield College to its arch-rival, Hale University).

"And what was great about working with Dean -- especially when we shot on the Disney Lot -- is that he'd then talk about what it was like to work with Walt. And how he just loved making those movies for the Studios in the 1960s & the 1970s because they were pictures that the whole family could go to," Peyton recalled. "The other pleasure -- at least from my point-of-view of sitting behind the camera -- was to just watch this guy work as an actor. There was a real precision there to Dean's timing and his natural, reactive acting that was just amazing, made him a real pleasure to watch." 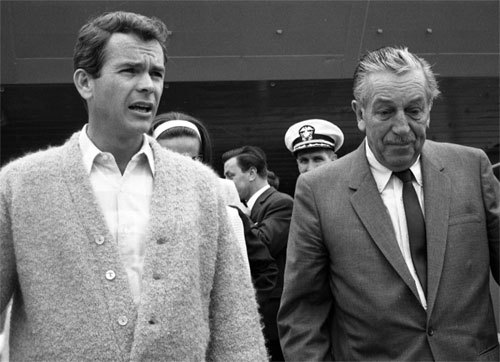 "I got the same sort of feeling as I was watching Michael Douglas work on Ant-Man. He -- just like Dean was -- is this consummate professional," Reed continued. "But then you have to remember that both of those guys started in TV. Dean did a lot of television back in the early 1960s before he started making movies for Disney. And Michael -- of course -- did 'The Streets of San Francisco' before he started his amazing film career. And it's not just that these guys were well trained. Jones & Douglas spent so much time in front of a camera before they started making films that they knew -- almost instinctively -- how much is too much. That just a little can speak volumes sometimes. So when you watch these guys work, it almost feels like this whole other era of screen acting."

Anyway ... Given how much Peyton had enjoyed working with Dean, when Disney -- as a follow-up to Reed's highly successful reboot of The Computer Wore Tennis Shoes -- asked him to do the same with 1968's The Love Bug, he immediately reached out to Jones to see if he'd be interested in reprising his role as race car driver Jim Douglas.

"But we almost didn't get Dean for this Love Bug TV movie because whoever was running the TV movie division of Disney / ABC back then was very cost conscious. And for his role as Dean Carlson in 'The Computer Wore Tennis Shoes,' the Studio had provided Dean with these three beautifully tailored suits. And I remember Dean saying that 'I'd love to get these suits.' That used to be a thing, by the way. That the Studio would allow actors -- especially those who played the lead roles -- to take home certain wardrobe pieces upon completion of production," Reed explained. 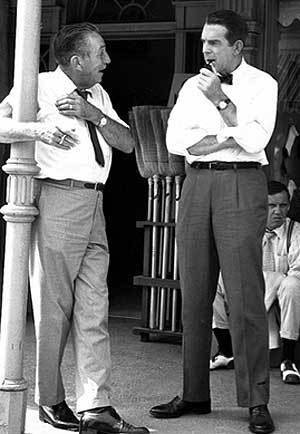 EDITOR'S NOTE: Having interviewed dozens of Disney Legends over the past 35 years, I can verify Peyton's story. More to the point, Jones asking that he be allowed to take home those three tailored suits was nothing compared to what Fred MacMurray used to do when he worked for the Mouse House. People who worked on The Absent-Minded Professor and The Happiest Millionaire still talk about how -- once these Walt Disney Productions were complete -- Fred would not only take home all of his wardrobe but also the hairpieces that the Studio had created for his character to wear. I've even been told of a time where MacMurray (who was notorious for being one of the more thrifty guys in Hollywood) -- after presiding over a scene where Thanksgiving dinner was being served -- insisted that he then be allowed to take home the cooked prop turkey that his character had just carved.

Getting back to Dean Jones and his tailored suits now ... Jones was understandably miffed when Mouse House accountants wouldn't allow him to take home these three wardrobe piece. Especially since -- back when Walt was running the Studio -- this was standard operating procedure.

"And the real irony of this whole situation was -- that very same year -- The Walt Disney Company declares Dean a Disney Legend. So there's this elaborate ceremony on the Lot when Dean gets to put his handprints in cement. And all of Disney upper management turns out to tell Dean how much they appreciate his contributions to the Studio's history. And yet there's still this one accountant somewhere who won't allow Dean to have those tailored suits. Who's insisting that three pieces have to go back to Wardrobe and be warehoused," Peyton continued. "This seriously caused Dean to have bad feelings towards Disney. In fact, if he hadn't had such a good time working on 'The Computer Wore Tennis Shoes,' if he & I didn't have such a good personal working relationship, I doubt that he would have come back to work on that 'Love Bug' TV movie." 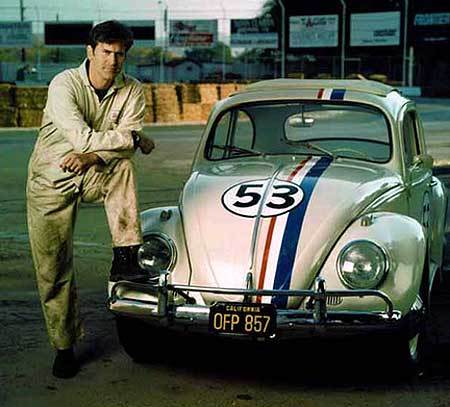 And Reed ... Well, he wanted to do right by Jones. As did cult movie favorite Bruce Campbell, who'd been cast to play Hank Cooper, Herbie's new owner.

"As soon as I told Bruce about how stupid the Studio was being about Dean & those tailored suits, he and I then came up with a plan to liberate those suits from Disney's wardrobe department so that we could then get them back to Dean. As I recall, Bruce and I bought three brand-new suits that we then swapped out for Dean's three tailored suits. So as far as Disney was concerned, if the Wardrobe department were to ever do an inventory, they'd still have the exact same number of pieces hanging there," Peyton smiled. "And let me tell you: Dean really appreciated getting those three tailored suits back, not to mention all of the effort that Bruce & I had put in in order to get those suits back. Which is why -- I think, anyway -- he did an especially good job on that 'Love Bug' TV movie."

Reed can still recall what it was like to be behind the camera as Dean climbed into the Love Bug and started talking to Herbie. 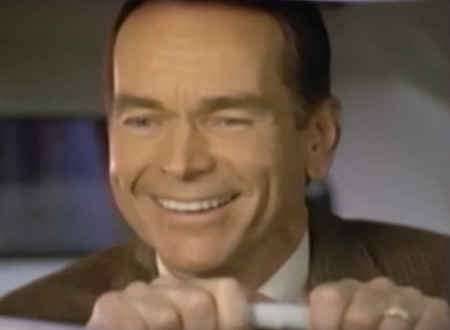 "I remember shooting this slow dolly shot as Dean got behind the wheel. And to me, at least at that point in my career, this felt like an iconic moment. Dean Jones sitting in the Love Bug. As a kid who grew up on these movies, it's hard not to feel this intense nostalgia when you're shooting something like that," Peyton said. " But then Dean actually began talking to Herbie, it was just ... Bruce and I used to marvel at him. We loved watching Dean work. He really was this old-school Hollywood actor."

"Dean could turned it on whenever the cameras were rolling. He just had it. You couldn't take your eyes off of him," Reed continued. "It's a distinctly different style of acting than actors have today. It's precise, not fussy. Dean had clearly done his homework as an actor and then comes in and just does it. And it was really magical to watch."

Which perhaps explains why -- when it came time for Jim Douglas to exit this TV movie of The Love Bug -- that Peyton decided to give Dean's character have a classical Hollywood send-off. Have Jim hand the keys to Herbie off to Hank and then walk off into the sunset. 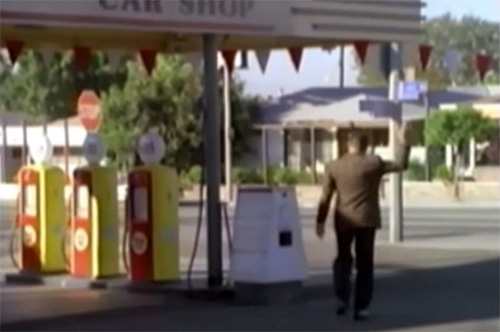 "That was a deliberate choice on my part. Though I remember -- as I was shooting that scene -- I suddenly had all of these questions like 'Where is Jim Douglas going? Did he drive there in a car? Where is he walking to now?," Reed concluded. "In the end, it didn't matter. It just felt like such a great movie moment that this real Disney Legend was walking off into the sunset."