It was a wild summer in Antarctica and in a bizarre way I was a first-hand witness to much of it. I spent the better part of three months down south this just-finished austral summer and saw everything the seventh continent has to throw at two-legged visitors and more: A sinking tourist ship in November, monstrous chunks of glacial and pack ice cracking off and separating from the continent in December, a string of preposterously-warm (for Antarctica) 40 (F) degree days and rain-soaked penguins shivering and dying in January.

That's a lot of calamity for one season but it was the rain that was perhaps most ominous. Of all the threats to Antarctica's future -- increased tourism, melting glaciers, ice shelves breaking off from the continent, renewed territorialism thanks to the melting ice (similar to economic infighting among border nations we're currently witnessing as the Arctic melts) -- nothing in the immediate future may be more threatening than rain. 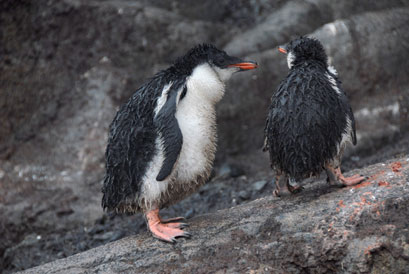 My exploration of the Peninsula, where I've been 10 times before, was unique this time around: We sailed down from the tip of Chile and then threw sea kayaks into the 30.5 (F) degree Southern Ocean and paddled south. A month and five hundred miles later, at 67 degrees South -- across the Antarctic Circle and just two degrees or about one hundred miles north of where that giant Wilkins Ice sheet cracked off last week -- we were stopped by a sheet of fast ice several miles deep at the southern end of Crystal Sound.

Nearly 40,000 cruise boat tourists visited the Peninsula this past summer, a record number. Despite what they heard in lectures from on-board naturalists and visiting scientists I'm sure most would be hard-pressed to say the ice is disappearing ... since there seems to be ice everywhere you look. Same for us. We'd sit on the calm ocean at day's end in our kayaks gazing up from sea level at the incredible snow-capped and glacier-edged mountain range that lines the Peninsula like a thousand Alaska's piled on top of another and wonder what it will take to melt all that snow and ice. But the place -- especially the Peninsula region and Western Antarctica -- is definitely changing, faster and faster.

Statistics first: In the last 30 years air temperatures over Antarctica have warmed faster than anywhere on earth; along the Peninsula average temperatures have risen five degrees since 1945. A recent NASA study shows that ice loss in Antarctica has increased by 75 percent in the past 10 years due to a speed up in the melting of its coastal glaciers.

The impacts are clear if you are looking. Along our route -- each night camping onshore or hiding out in protected bays -- we visited with American and Ukrainian scientists who pointed to glaciers near their bases that had receded by thirty to forty feet, exposing islands no one ever knew existed. 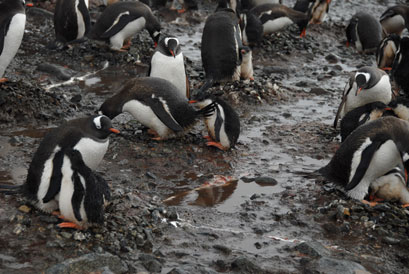 Penguin-researchers working for the Washington, D.C.-based environmental group Oceanites, who camp on Peterman Island each summer, showed us how whole colonies have abandoned nests and moved south, in search of the colder air and thicker ice they are accustomed to. (The Adelie penguin population across the continent has shrunk by 33 percent in the past 25 years due to a decline in sea ice habitat.)

In early January we saw two-and-a-half weeks of clear skies interrupted only by the occasional powerful katabatic winds that come roaring off the glaciers, and very little precipitation. And then the rains came, in torrents, like no one who has worked along the Peninsula during the past decade can remember.

Rain is bad for Antarctica on a variety of fronts. It pours into crevasses furthering and quickening the degradation of glaciers, which are already being impacted by warmer air and less protection by the ice shelves that hold them back from collapsing into the sea. Just like the early spring rains in the northern hemisphere that melt the last of winter's ice and snow, the same is now happening in Antarctica.

The most affected by the rains may not be the ice but the penguin chicks. Born almost at once during the early weeks of November, the hundreds of thousands of chicks along the Peninsula are nurtured by their parents through the summer -- fed, coddled, warmed -- before being pushed out on their own come early March. But during December and January they are still infants, and still covered with down. We all know what happens to down when it gets wet? It is soaked, nearly impossible to dry.

We stopped for two days at Port Lockroy, an island home to a former British refuge hut. While we were there it rained and rained and rained and as we walked around the island in a thick goo of mud and guano we saw thousands of penguin chicks soaked and shivering (despite the rain, the air temperatures are still only in the mid-30s) and freezing to death. Obviously panicked parents tried to help, but by this stage the chicks are nearly the same size as they are, thus difficult to protect. Sans hair dryers or a warming hut, the parents could only look on as the two-month old chicks suffered and froze.

For us, it was the most empirical evidence that climate change has come to the Peninsula. It's one thing to eye an imposing 50-foot-tall glacier and be told that it has shrunk 30 feet in the past decade. It's quite another to see masses of penguin chicks dead in the mud on an Antarctic island.