Antarctica, the coldest place on Earth, teems with microscopic life. Tiny organisms dwell on the ice and live inside glaciers, and now, researchers confirm, a rich microbial ecosystem persists underneath the thick ice sheet, where no sunlight has been felt for millions of years.

Nearly 4,000 species of microbes inhabit Lake Whillans, which lies beneath 2,625 feet (800 meters) of ice in West Antarctica, researchers report today (Aug. 20) in the journal Nature. These are the first organisms ever retrieved from a subglacial Antarctic lake.

"We found not just that things are alive, but that there's an active ecosystem," said lead study author Brent Christner, a microbiologist at Louisiana State University in Baton Rouge. "If you had to think up what would be the coolest scenario for an ecosystem in Antarctica, you couldn't make this up." [See Photos of Lake Whillans' Drilling Project & Microbial Life]

Antarctica has nearly 400 lakes trapped under its ice sheet. Some of them — like Lake Whillans — are connected by rivers and streams. Others are deep, isolated basins like Lake Vostok, where drillers have yet to successfully recover uncontaminated water samples. The new Lake Whillans discovery raises scientists' hopes that these other hidden waterways also carry life.

"This is a landmark paper for the polar sciences," said Martyn Tranter, a glaciologist at the University of Bristol in the United Kingdom, who was not involved in the study. "This paper is bound to stimulate further calls for subglacial lake research."

Drillers broke through to Lake Whillans in January 2013, after years of planning and more than $10 million spent by the National Science Foundation. The team, called WISSARD, used a custom hot-water drill with its own decontamination system. Within a day of pulling out the tea-colored water, tests done in a temporary lab confirmed the lake sparked with life. Researchers returned to the United States with 8 gallons (30 liters) of lake water and eight sediment cores from the lake bottom. Scientists at Montana State University, the University of Tennessee and other institutions parsed out the precious samples, growing cultures of different cell types and sequencing the DNA. The results show evidence for 3,931 species of single-celled life in Lake Whillans. [Video: Life Discovered in Subglacial Lake Whillans] 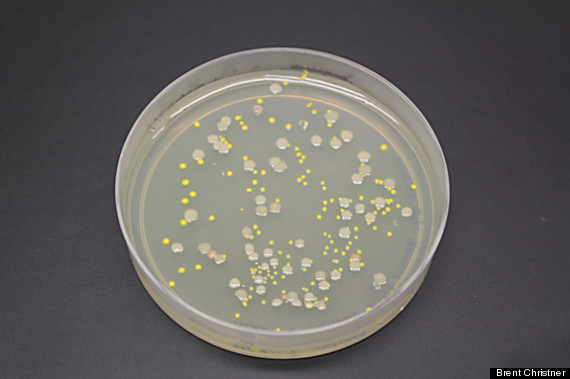 Living without sunlight, all of the lake organisms rely on minerals in the water and lake muck for the energy needed to "fix" carbon dioxide, turning it into organic compounds. The most abundant microbe is an archaea that lives in the water (rather than mud) and oxidizes ammonium. When the archaea die, they become food for another group that oxidizes sulfur for energy, Christner said. The second most common group of microbes oxidizes iron. Yet another group of bacteria chomps on methane.

"These are opportunists that are using every available energy source," Christner said.

Crushed under ice, Lake Whillans is not like a pond or lake at the surface. The environment is more like the deep ocean floor, which is cold and starved for nutrients, Christner said. The water's muddy color comes from glacial flour — pulverized rock that is so fine it barely settles in liquid.

The oddly shaped pool is only 6.5 feet (2 m) deep and 23 square miles (60 square kilometers) in size. It sits on the side of a hill, trapped in an ice pocket by the weight of the ice above. The water temperature is only slightly below freezing, at 31.1 degrees Fahrenheit (minus 0.5 degrees Celsius). Antarctica's stream network regularly fills and drains Lake Whillans like a bathtub on a five- to 10-year cycle.

The sea flooded Lake Whillans' home more than once before Antarctica iced over. The lake's ammonium and methane likely came from decomposing organic matter in these ancient marine sediments, the researchers said.

"This area is like southern Louisiana with a kilometer [half-mile] of ice over it," Christner said. 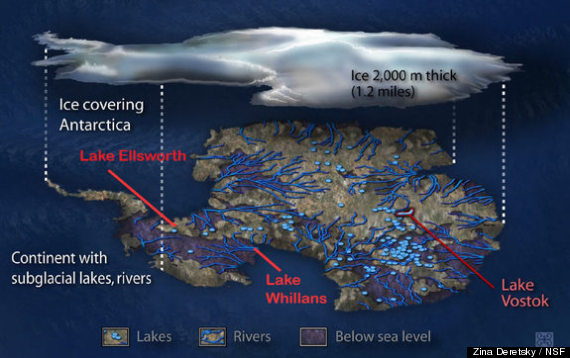 Life on other planets?

The team would like to track down the origin of Lake Whillans' life — whether it arrived from elsewhere, brought in by ice or rivers, or was trapped in place, in the old ocean sediments.

Only bacteria and archaea have been found so far, but the researchers have not thoroughly tested for more complex eukaryotic life, the kind of cells that make up animals such as the worms that dwell in Antarctica's surface lakes. However, they did not expect to encounter such organisms, because the subglacial lake is energy-starved.

The findings at Lake Whillans also provide a unique glimpse into how life may survive on other planets, such as within Mars' ice cap or beneath the icy exterior of Jupiter's moon Europa.

"I think this does strengthen the case for finding life on icy bodies," Christner said.