The hole in the planet's ozone layer may be shifting wind patterns and cloud cover over Antarctica in a way that could be triggering slightly warmer global temperatures, a new study finds.

Using computer models, researchers examined how the ozone hole may be altering winds in the jet stream over the Antarctic region, pushing clouds closer to the South Pole. These changes in cloud cover could affect how much of the sun's radiation is reflected by the clouds, leading to a slightly warmer planet, the scientists said.

"We were surprised this effect happened just by shifting the jet stream and the clouds," study lead author Kevin Grise, a climate scientist at Lamont-Doherty Earth Observatory at Columbia University in New York, said in a statement. [Top 10 Ways to Destroy Earth]

As the clouds migrate toward the South Pole, the amount of energy they can reflect is reduced, which means more radiation can reach the ground, Grise explained.

How much the ozone hole may be warming the planet is unknown, but Grise and his colleagues estimate an increase of less than 0.09 watts per square foot (1 watt per square meter) of energy could be reaching the ground. This type of warming is still a much smaller effect than the global warming caused by greenhouse gas emissions. 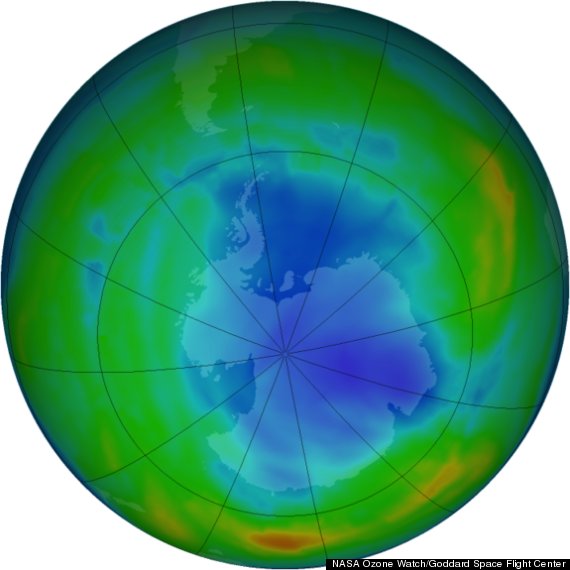 A satellite view of the status of the ozone layer over the Antarctic pole on Aug. 5. The purple and blue colors represent areas where there is the least ozone, and the yellows and reds are where there is more ozone. Credit: NASA Ozone Watch/Goddard Space Flight Center

It started with a hole

Ozone is a molecule that consists of three oxygen atoms. These molecules are highly concentrated in the lower portion of the stratosphere, a layer of the atmosphere located about 12 to 19 miles (19 to 31 kilometers) above the Earth's surface — about twice as high as commercial airplanes fly.

The Earth's ozone layer prevents most of the sun's harmful ultraviolet light from reaching the ground, protecting all the life forms on the planet's surface.

In the early 1980s, scientists discovered a hole in the ozone layer that forms over Antarctica during the Southern Hemisphere's spring months, from September to November. This thinning, which can decrease the ozone concentration by as much as 70 percent, was caused by the rampant use of human-made chlorofluorocarbons (CFCs), organic compounds that were once widely used in cooling systems and aerosols.

In 1987, the Montreal Protocol banned the use of CFCs worldwide, and despite the persistence of the ozone hole, the international agreement has had demonstrable effects. Earlier this year, observations from the European Space Agency's MetOp weather satellite indicated that the hole in the ozone layer is shrinking. In 2012, scientists reported that the ozone hole was smaller than it had ever been in the previous decade.

Grise anticipates that as the ozone layer recovers, the jet stream will shift less. But increasing levels of greenhouse-gas emissions could affect midlatitude wind patterns, which might push the jet stream poleward.

"You have sort of this tug-of-war between the jet being pulled equatorward during the summer because of the ozone recovery and the greenhouse gases pulling the jet further poleward," Grise said. "What the clouds do in that scenario is an open question."

Because predicting cloud behavior is so difficult, the computer models used in the research could be underestimating clouds north of the jet stream that get pulled toward the equator. If this is the case, these clouds would reflect more light, which could counteract the slight warming effect described by Grise and his colleagues, said Dennis Hartmann, an atmospheric scientist at the University of Washington in Seattle who was not involved with the new study.

"[T]his is certainly a very interesting topic and potentially important from a practical perspective of predicting Southern Hemisphere climate and even global warming rates," Hartmann said in a statement.

Grise and his colleagues intend to investigate these dynamic possibilities in future research. The detailed findings of the new study were published online July 19 in Geophysical Research Letters, a journal of the American Geophysical Union.