The donut of sea ice encircling Antarctica is hovering around its yearly winter maximum area, and there’s little question that it’s going to set a record high this year.

“Antarctic sea ice in 2014 is going to set a record for sure,” said Ted Scambos, a senior scientist with the National Snow and Ice Data Center in Boulder, Colo.

This end-of-season apex will have surpassed 20 million square kilometers (or 7.7 million square miles) “for the first time ever to our knowledge,” Scambos told Climate Central. And not only will the maximum be a record, but “nearly every day has been a record for that day in the satellite record” this year, he added, following a pattern of anomalously high winter maximums since 2012. (The satellite record extends back to the late 70s-early 80s.)

This boom of sea ice around the southernmost continent in the past few years stands in stark contrast to the decades-long decline of sea ice in the Arctic Ocean. Arctic sea ice hit its sixth lowest extent at the end of this summer, with part of the ice’s edge coming within 5 degrees latitude of the North Pole.

That Arctic ice melt is robustly connected to the overall warming of the planet. The loss of reflective, white ice also amplifies the warming around the North Pole; as more dark, open ocean is exposed to incoming sunlight, the water absorbs those rays, heats even more and melts more ice. The growth of Antarctic sea ice may also, paradoxically, be connected to global warming, though the exact combination of causes is still a major area of study. And just what the causes turn out to be will affect how long the Antarctic growth will go on for.

“I think there’s still some debate going on about how this is all pieced together,” Scambos said.

Because the Northern and Southern Hemispheres experience opposite seasons, Antarctic sea ice always sees its winter maximum extent when the Arctic hits its summer minimum. (The timing is actually a little bit off, as the Arctic minimum typically comes in mid-September before the onset of fall causes ice to start refreezing, while the Antarctic maximum has been trending later in recent years, reaching into October before a clear melting trend emerges.)

Antarctic sea ice doesn’t take as sharp a curve when it switches from a state of growth to melt as the Arctic does in the other direction, which means it takes longer for researchers to make the official call of the winter maximum, Scambos said. The chart of Antarctic sea ice growth also exhibits a lot more wiggles in it than the Arctic does, as storms and shifts in prevailing winds can impact how much of the seas around the continent are covered by ice. Researchers have to watch and ensure a late-season storm doesn’t boost the maximum.

Whatever this year’s maximum amount turns out to be, it has already beaten the record extents set consecutively in 2012 and 2013. On Sept. 19, the five-day average of sea ice area surpassed the 20 million square kilometer mark, according to NSIDC records, handily beating last year’s record extent of 19.5 million square kilometers. The extent has dropped slightly since then, but hasn’t yet started a clear downward trend into the spring melt. 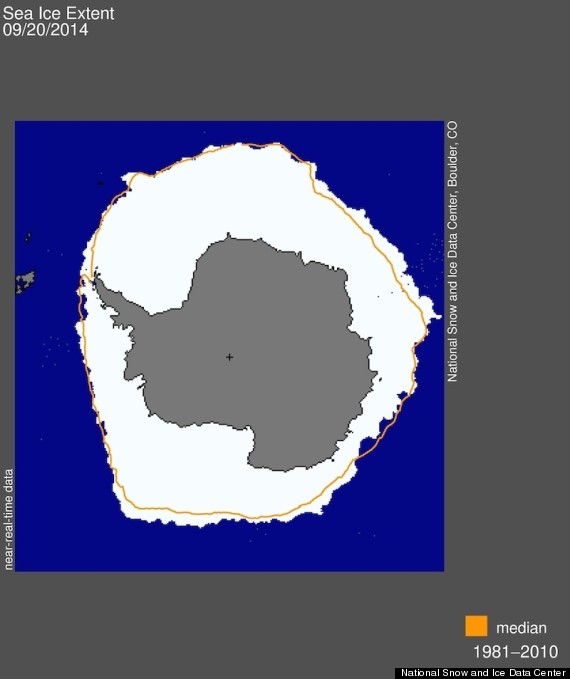 Antarctic sea ice extent for September 20, 2014 was 20.07 million square kilometers (7.75 million square miles). The orange line in the figure shows the 1981-2010 average extent for that day, and the black cross indicates the geographic South Pole.

But even apart from the record maximum extent, 2014 has been an exceptional year with record extents for most calendar days, with the exception of two periods, one during March and April and one in July, Scambos said.

While this record ice growth would seem to contradict global warming or make up for the melting in the Arctic, it does neither, scientists say. The percent rise in Antarctic sea ice extent is smaller than the decline in Arctic sea ice, and the Antarctic growth is “nowhere near the kind of potential climate impact we’re seeing from losing Arctic ice,” Scambos said. The growth might even be a symptom of the Earth’s changing climate.

Some researchers have linked the growing sea ice to changes in the prevailing westerly winds that circle around the continent (those changes have in turn been variously linked to the ozone hole, warming of the Antarctic continent, and natural variations). As the winds blow stronger, they push ice ahead of them and to the left of the direction of motion, which in Antarctica is away from the continent. This spreads the ice and opens new areas of water that can then freeze.

Wind has been shown to be a good explanation for the general upward trend over the past few decades, Scambos said, adding that it remains to be seen whether it can also explain the more dramatic uptick of recent years.

It’s also possible that the main cause of the melt is the warm ocean waters that are reaching the base of the massive, miles-thick ice sheet that covers Antarctica at points where the flowing glaciers that make up the ice sheet flow into the ocean. The melt of many of those glaciers has dramatically increased in recent decades — recent studies have found that the melt of some is now unstoppable.

That melt creates a layer of fresher water at the ocean’s surface, and while it isn’t enough of a change to lower the freezing point of the water, it does act as a more stable barrier when the freezing point is reach and ice begins to form.

“It’s sort of a stable, cold puddle in which ice can readily grow if it gets below freezing,” Scambos said, adding that the puddle “is more stable and thicker than it used to be.”

But which of these factors is the dominant force and what amount of the ice growth each accounts for is something scientists are still avidly investigating. 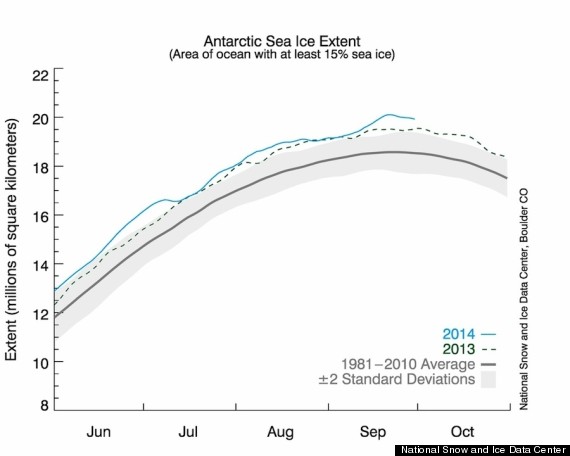 The growth of Antarctic sea ice through the austral winter (summer in the Northern Hemisphere), as compared to 2013 and the 1981-2010 average.

“There hasn’t been really a resolution as to which of these potential explanations is the best explanation” for these years of rapid growth, Scambos said.

“Really it’s a time where the understanding of climate and sea ice interaction around Antarctica is in a state of flux.”

Which one turns out to be the bigger influence could determine whether the trend of the past few years continues. If the melting and freshening of the ice is the main driver, then “the trend is not going to go away very easily,” Scambos said, as glaciers are likely to melt more and more as the continent warms.

And one thing is clear: the continent is warming. “By several measures, Antarctica is getting warmer,” Scambos said. For example, temperature records from the continent show “a fuzzy but distinctly warming trend for most of Antarctica.”

“Yeah, we don’t understand everything about the Antarctic sea ice extent,” he said, but trends in temperatures, winds and other factors are very much in line with greenhouse-driven warming.

“Antarctica is very much participating in the overall global climate,” Scambos said.

Antarctic Sea Ice Just Hit A New Maximum, But That Doesn't Mean The Continent's Not Warming
The Earth From Above