If it was simply a weather balloon that appeared over an Antarctic research station, then why hasn't anyone confirmed it?

A video has come out of the cold, showing an image of a possible UFO above the Neumayer-Station III research facility in Antarctica on August 10, according to livescience.com.

The circular object appears to hover over the station which conducts scientific research into geophysics, meteorology and atmospheric chemistry.

And, as one might expect, they use weather balloons to study the atmosphere over the South Pole.

Check out this video that uses enhancement techniques to clarify the UFO.

One aspect of this image that UFO commenters are pointing to is how the object is seen in just a few frames of the footage.

But Ben Radford, writing in Live Science, suggests that's not unusual when video is sped up. "That's what happens in time-lapse photography: objects that are not stationary for long periods of time only appear in a few frames. ... There's nothing mysterious about it."

Despite the plausibility of that argument, some -- like "UFO expert" Russell Tetrault, disagree and have their own theories about the Neumayer UFO, pictured closeup, below. 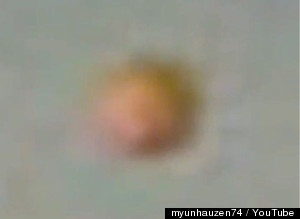 "I have examined the evidence and have concluded that this is a craft and that it is most likely of extraterrestrial origins," Tetrault is quoted by ringsidereport.com.

"There are some real dogs out there that have been calling this a balloon, but it is misinformation put forth by the government intended to squash this before the public wakes up to the fact that we are and have been getting visits from another race," said Tetrault, whom ringsidereport.com refers to as "highly respected in the UFO community."

Even if an official explanation is forthcoming about this South Pole UFO, it still won't satisfy everyone, especially those who prefer to believe that all unidentified or mysterious aerial objects probably originate from another planet or, even closer -- another dimension.

Here are some other explanations for UFOs.