Antarctica may seem hostile to life, especially the continent's vast and largely ice-free Dry Valleys. But new research shows there may be an entire world underground, with rivers of liquid salt water flowing to subsurface lakes, all of which could be teeming with microbial life.

One of the continent's most unique features, the rust-red Blood Falls, may even be a "portal" into that subterranean world.

The "falls" are actually a brine, or salt water, mixed with iron from the bedrock below. As bacteria slowly chew the rock, the iron is released into the brine. The salt water and iron combination creates a distinct rust color when it mixes with oxygen as it reaches the surface, according to National Geographic.

Here's a look at the falls, which emerge from the Taylor Glacier and flow into Lake Bonney in one of the Dry Valleys: 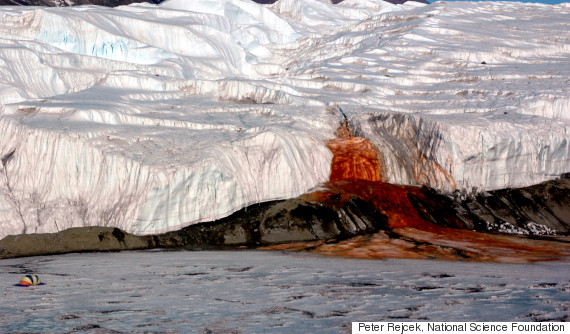 During the study, researchers used a sensor in a helicopter to detect salt water flowing beneath the surface.

"We found, as expected, that there was something sourcing Blood Falls," lead study author Jill Mikucki of the University of Tennessee told the Washington Post. "We found that these brines were more widespread than previously thought. They appear to connect these surface lakes that appear separated on the ground. That means there's the potential for a much more extensive subsurface ecosystem, which I'm pretty jazzed about."

Live Science reports that the research team found water stretching from the coast to at least 7.5 miles inland, as well as briny water flowing beneath the Taylor Glacier at least 3 miles deep, which is as far as the device can detect.

"This unique feature is much more than a curiosity –- it is a portal into the Antarctic subsurface, a hint at what lies beneath," Mikucki told New Scientist.

Where the briny water flows, so too may microbial life.

"Over billions of years of evolution, microbes seem to have adapted to conditions in almost all surface and near-surface environments on Earth. Tiny pore spaces filled with hyper-saline brine staying liquid down to -15 Celsius (5 degrees Fahrenheit) may pose one of the greatest challenges to microbes," Slawek Tulaczyk, a glaciologist and coauthor at the University of California, Santa Cruz, said in a news release. "Our electromagnetic data indicate that margins of Antarctica may shelter a vast microbial habitat, in which limits of life are tested by difficult physical and chemical conditions."

And the distinctive Blood Falls is where it all comes to the surface.

"Blood Falls is the only known surface manifestation of these deep brine systems and has been shown to contain a viable ecosystem with numerable microbial cells," the researchers wrote in their study, published Tuesday in Nature Communications. "Blood Falls reveals how microbial metabolism can release iron from underlying bedrock, which is ultimately discharged to the surface or below ground to Lake Bonney."

The discovery may also hint at how life may appear on other worlds, including Mars, which has an environment similar to that of the Dry Valleys, and some of the frozen moons of Jupiter, which may contain subsurface liquid water.

"The subsurface is actually pretty attractive when you think about life on other planets. It’s cold and dark and has all these strikes against it, but it’s protected from the harsh environment on the surface," Mikucki told the Washington Post.

The Mountains of Antarctica