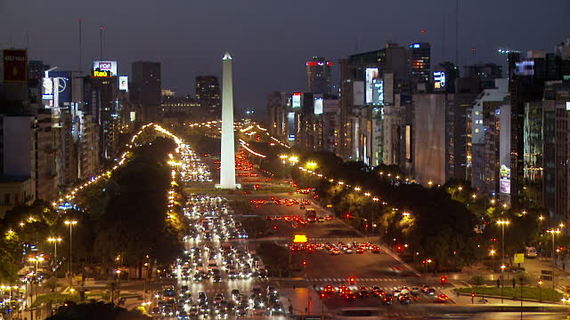 Changing our perspectives is difficult. We become entrenched in our world views, safe in our beliefs, cosy in our own contexts, luxuriating in the warm familiarity of what we 'know'. As a consequence shifting our own awareness, attitudes and perceptions can be painful, forcing us to let go, reassess, reframe and readjust. Transition is often uncomfortable.

Travel is the epitome of transition. On Saturday morning I awoke in a chalet full of friends, old and new, in a village in the French Alps after a week of snow-boarding adventures in which the temperature had plummeted to -20 degrees Celsius on some nights. Seventy two hours later I arrived on an overnight bus in the town of General Roca in Patagonia, Argentina with the temperature almost sixty degrees hotter. Needless to say my context has somewhat dramatically shifted during that relatively brief period.

As a habitually slow traveller I am rather unused to this intensity of change. Grounded travel tends to facilitate gentler adjustment, the easy flow of landscape, culture, people and language. Not so the breezy discombobulation of flight. We had returned to London overland by train from our ski-trip to Morzine. One night abed at home and then my first holiday by plane in twelve years whisked me from London to Buenos Aires. In 48 short hours I'd traversed continents, the Atlantic, the equator and hemispheres, plunging head-first into Latin America and the 'Paris of the South'*.

I shuffled wearily in the immigration queue at Ministro Pistarini airport amongst my fellow jet-lagged passengers, their souls, as William Gibson eloquently puts it 'being reeled in on some ghostly umbilical down the vanished wake of the plane that brought [them] here, hundreds of thousands of feet above the Atlantic'. To be collected, after a delay, like luggage from the arrivals lounge carousel.

And thence to lunch with a stranger. On Sunday night I'd idly posted on Facebook 'Anyone fancy lunch in Buenos Aires tomorrow?'. And confounding the supposedly superficial self-interest of the social network, I'd been connected with a lawyer friend-of-a-friend (they'd met, just the once, on a Mexican holiday twelve years previously). With the spectacular, life-affirming generosity of spirit such encounters often engender, we'd toured the city, before settling for a late al fresco lunch in the trendy side-streets of Palermo.

Determined to give me a rapid immersion in his country, my host ordered a bountiful spread of famed asado grilled steak, a plethora of trimmings from candied garlic to pungent aubergine, followed by a huge slab of 'flan' with cream and dulce de leche (like caramelized condensed milk). On top of all this the signature digestif of bitter Fernet Branca, sweetened with coke was almost too much for me. It turned out to actually be too much for my up to then convivial host, who subsequently threw up all over his own steering wheel when driving me back to the Terminal de Omnibus shortly after.

There I demonstrated my rusty travel skills by falling for one of the oldest scams in the book. In open-hearted and friendly mood after lunch I was approached by a guy asking a question about the taxi rank. Pointing him in the right direction I was distracted for the simple split-second that is all a seasoned bag-snatcher needs, and sure enough on turning back round to my rucksack my smaller bag had vanished.

Fortunately the essentials, money, passport, phone were still about my person. So the liberator of my bag would only enjoy a rather miscellaneous selection of items; my notebook (a fascinating read obviously), a half-read copy of the riotous 'A Confederacy of Dunces' my brother had given me and which I had been hugely enjoying, a pair of prescription sunglasses, a heavily dented Sigg water bottle and that-never-leave-home-without-it essential - a tweed cap.

As my night bus to General Roca pulled out of the Terminal I spotted the many pavement higglers squatted along the dusty roadside. Their 'wares' a motley selection of random bits and pieces, which the contents of my bag would surely be shortly joining. Hopefully their liberation from me and subsequent sale would change someone's world that night. Perhaps a family would eat.

I had transitioned, arrived and connected in Latin America, three days had already changed my world. And with these thoughts in mind the bus rumbled on through the Buenos Aires traffic and off into the sunset towards Patagonia and the end of the earth.

Ed Gillespie is Co-Founder of www.wearefuterra.com, author of 'Only Planet - a flight-free adventure around the world' and off to the Antarctic...

This blog is part of a series. Read the first instalment here. Or visit the author's profile page.

* Many cities around the world lay claim to their own geographic comparison to the French capital. In 'Only Planet - a flightfree adventure round the world' I visited Irkutsk, the 'Paris of Siberia'. But then in Siberia there is really not much competition, and given the city's Soviet-style concrete brutalism the assertion was very possibly an insult to the city of light. Even more incongruous claims come from Baku in Azerbaijan and Shanghai, China both contenders for the title 'Paris of the East'. And Norwegian Tromso bids for the 'Paris of the North' - allegedly because visitors were surprised by it's sophistication given it's other title of the most northern city (of 50,000+ people) in the world.