"We are all in the gutter...but some of us are looking at the stars" Oscar Wilde 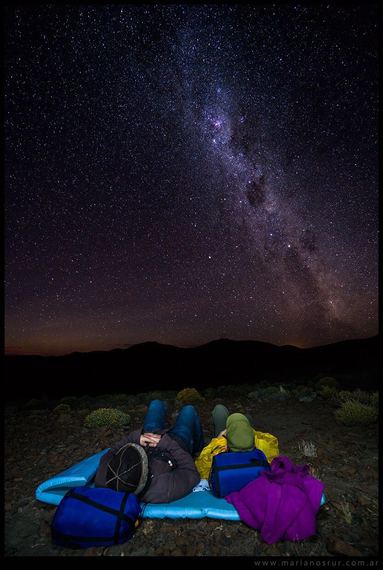 Into the wild. The Patagonian Linea Sur ('Southern Line' -- named after the railway line that passes through its inhospitable territory) is a high, dry plateau of extensively grazed, scrubby steppe. Its population consists of isolated households and a few small villages where sheep and goat herders gather for gossip and mate.

As such it is a natural 'dark sky park', the irony of which would not be lost on its residents, the remotest of whom are still only just greeting the arrival of new-fangled electricity through solar panels. It is a perfect place to reconnect with the cosmos from the perspective of our pale blue dot.

After a few days carousing with one of my oldest friends in nearby General Roca, I set off with an inspiring duo of photographic companions from Hidden Patagonia for a night of wild camping under the stars. Our two-hour journey took us up and onto the thousand meter high mesa on a classic desert highway. Long straights of gravel-flanked rough asphalt stretched out in front of us to the far horizon.

Traffic along the road was sparse. Traffic across it, on the other hand, was plentiful, and sadly often fatal. While not exactly fecund, the harsh, arid landscape supports a profusion of wildlife. Despite having a free run at thousands of square kilometres of relatively untouched habitat, these creatures seemed tragically drawn to the road and the possibility of doom. Perhaps like Werner Herzog's suicidal Adelie penguin in Antarctica?

Quail-like Martinets, oblivious to warning sounds of the horn, went agonizingly under the vehicle to our gasps of pain and frustration. Balls of fluff in the road represented 'Cui', a Patagonian guinea pig. And standing sentinel-like on adjacent fence posts a selection of raptors surveyed the roadkill offerings dismissively, perhaps preferring something a little fresher. Boundaries of taste were further crossed when we encountered a pair of grey foxes tugging hungrily at the carcass of a third, less fortunate one. Necessity is the mother of cannibalistic invention.

Leaving the death-zone of the formal road, we diverted onto an unmade side track. Via an imperceptible 'gate' (marked by an aged sun-bleached blue jacket strung across the wires, which apparently can still be found on Google StreetView) we made our way along a dusty, arroyo-eroded trail to an abandoned puesto (shepherd's hut) at the foot of a long extinct and ancient volcano. Inside the hut a beautiful owl was quietly roosting.

Nestled in the sheltered embrace of the volcano's flanks we made our camp and prepared for the light show to come. As the sun set behind the mountain of igneous rock behind us, the persistent warm breeze eased and an ear-ringing silence of serenity descended. 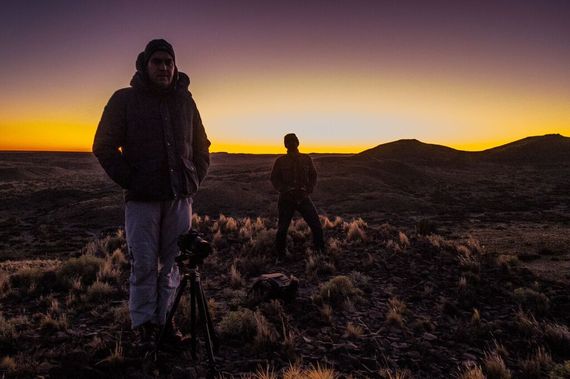 The setting sun left a warm ebbing glow behind the now sharpened silhouettes of the time-worn peaks. An azure blue and cloudless sky gradually faded to black and the first pin-pricks of stars broke the velvet firmament.

Following a briskly barbequed steak I found myself lying prostrate on the rocky ground with the full majesty of one of the outer spiral arms of our home galaxy the Milky Way arrayed above. The clarity of resolution brought new meaning to the term 'star-peppered'. In my naiveté I even confused the two Magellanic clouds for actual puffs of cloud, before it was pointed out they were actually super-dense galactic clusters, each containing hundreds of thousands of stars.

The cosmic majesty was, in the true and literal meaning of the word, awesome. And when confronted with such celestial inspiration one is never far from a good wrestle with the Fermi paradox, one of my favourite night sky discussions.

Fermi asked 'Where is everybody?' given the contradiction between the high estimates of the probability of extra terrestrial intelligence (ETI) and our total lack of evidence for it. There are many attempts to answer this conundrum. Perhaps ETIs are actually very rare or even non-existent, and despite the evolution of complex life no 'intelligent' species have arisen. Maybe ETIs are 'non-technological', or intelligent civilisations inevitably destroy themselves through biological, nuclear or Artificial Intelligence (AI) means? It's also possible natural extinction events like the meteorite that did for the dinosaurs may be an ETI's undoing, or simply that the vast distances in universal space and time mean we're out of synch chronologically or just out of range of other ETIs. 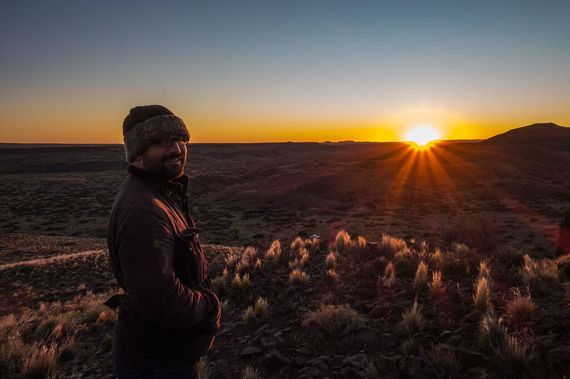 Given my work in communications, I'm interested in whether we might all be listening out for one another, but afraid to reach out to one another. Or are we 'messaging' in the wrong way? Or perhaps we are well observed but unaware? All are possible, but of course unverifiable. At least for now. Which is what makes for such vigorous debate when flat on one's back contemplating our galactic and evolutionary position.

Perhaps my favourite argument is the sustainability one however. That a truly intelligent species consciously acknowledges the fact that infinite exponential growth in a context of finite resources is untenable. That a more harmonious alignment between peoples (for want of a different word) and planets might be preferable? That the simple with-the-grain-of-nature life may elide seamlessly with a better life? In the context of the elegant subsistence of the Linea Sur this felt quite apt.

As the magical personal planetarium of the Milky Way peaked we were greeted by the rise of the moon, smokey and yellowed. And a new, lunar-illuminated phase of the night began. The stars melted away and a cool, blue brilliant light flooded our dark valley. We praised the privilege of this perspective and mourned the danger of its denial to emerging urban generations. For whilst we may currently lie in the gutters of our true human potential, we are surely doomed if we fail to look up to our stars and beyond.

Ed Gillespie travelled into the Linea Sur with Hidden Patagonia and is Co-Founder of www.wearefuterra.com, author of 'Only Planet - a flight-free adventure around the world' and off to the Antarctic...

This blog is part of a series. Read other instalment's via the author's profile page.