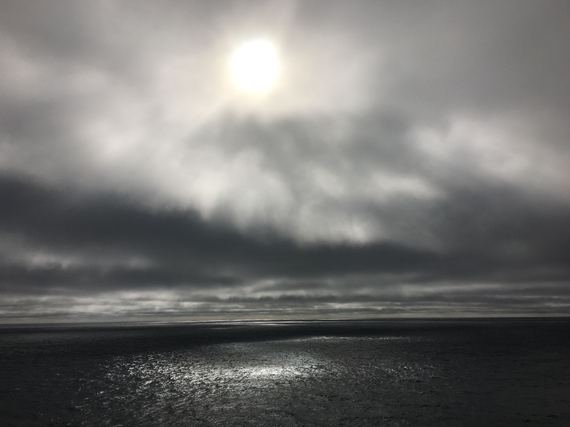 The steely sea rolls but our passage is calm over the 'Drake Lake.' A few dozen hours earlier the story was a rather different one. A swell peaking at almost fifteen metres had served up a violent voyage to other less fortunate vessels. Dismissing them as so much nautical flotsam to be rocked, tossed, shaken and stirred.

The weather was smiling on us, but it was a smiling knife. The colossal volume of water squeezing through this pinch-point, the circumpolar 'fetch' and gnawing winds can quickly combine to wreak havoc. The waters were full of brooding menace. Ready in a perverse inversion of seduction, as I wrote in 'Only Planet', to swiftly 'slip into something far less comfortable'.

We'd left the last isolated icebergs behind us. Their Ozymandian fates are sealed by the warming world as they drift north. Once mighty islands many miles long melt despairingly into the sea. The mightiest may have sailed the Southern Ocean for a dozen years or more.

I stood on deck scanning the horizon for hours, relishing the physicality of the buffeting wind. Squinting in the brilliant sunshine that danced down through the wind-whipped clouds. Everything was illuminated. Whale spouts puffed up steamily from the sea all around. Striking a chordant note. Harmony means all life having space to breathe.

Around the ship Albatrosses and Petrels sweep the sea, riding the muscular ocean undulations with deft delicacy. Wingtips almost in the water with effortless trim they skim the surface. Away from land for most of their lives these avian navigators embody evolution's elegance of solutions. Hollow-boned for light-weighting their almost perpetual flight is free, not forced by the roar of a jet engine or whir of a propeller like ours.

Nature's intricately, intimately specialised adaptation seems clearer in Antarctica. In the stillness between the roaring katabatic winds of modernity we see with greater clarity. The unique and artfully cusped teeth of the Crabeater seal for straining krill from the icy water. The bubble-curtains created by circling Humpbacks to coral their prey into a lungeable mouthful. The penguins' barbed beaks that snag on snacks of slippery silver fish, ensuring a one-way trip into their gullets. Perfected designs developed and bent to fit their environment. Not the human tendency to develop and bend the environment to fit us.

Across the Antarctic Convergence the temperature rises a few welcome degrees. The chills I feel now are the thrills of remembrance. Shivers of gratitude and privilege. My voice already cracks with emotion when I try to elocute what this experience has meant. The tears that occasionally well are a bittersweet and quixotic cocktail of joy and sadness. 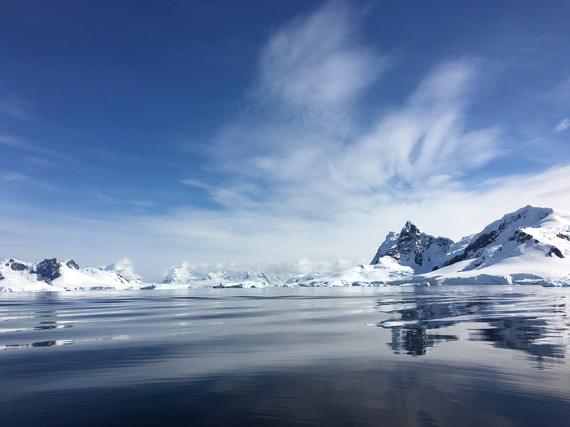 I may have left Antarctica, but Antarctica is refusing to leave me. Its legacy forces me to sharpen the questions that define our sense of who, where and how we are in the world? The edges of those enquiries cut deep.

In the past we broke ourselves to be here. The immense courage and intense suffering of early polar explorers makes for both inspirational and grim reading. Frozen deaths in the depths of crevasses. Ravaged by scurvy. Starving men poisoned by overdoses of Vitamin A through eating the livers of their dogs in desperate attempts to survive. Deranged souls biting off their own frost-bitten fingers. And we haven't even mentioned Scott or Shackleton's doomed expeditions.

Now we are breaking the planet. Apsley Cherry-Garrard, a member of Scott's larger polar party, wrote an epic travelogue, 'The Worst Journey in the World', about his experiences in Antarctica. The book narrates a pitch-dark winter march in appalling conditions he made with two companions (both of whom later died with Scott on the return from the push for the Pole) to obtain an Emperor Penguin egg from a remote colony at Cape Crozier on Ross Island. It was a purist scientific endeavor hoping to use the embryology to link birds and reptile ancestors. Following the deprivations of this adventure 'Cherry' ruminated that 'the luxuries of civilisation satisfy only those wants they themselves create'.

The nefarious 'needs' we nurture through our runaway, resource hungry consumerism are breaking us spiritually too, as well as our beautiful Earth. This is not wealth. We are already rich beyond our wildest dreams. It is what Ruskin called 'ill-th', a distracting and destructive pseudo-prosperity.

It may seem to many, that like our ship in the Drake Passage, we're 'getting away with it'. For now. But when the going is still good is not the time for cocksure complacency. There are storms coming. Of that we can be certain. 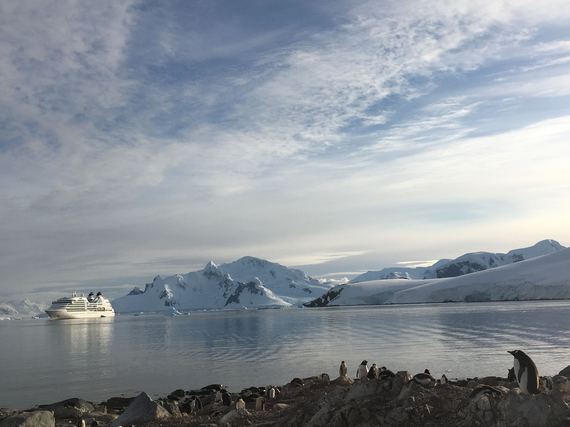 So perhaps its time for a new heroism? The simple act of reconnecting with one another and the home we all share. Of looking into one another's eyes and speaking the real truth in our hearts. Airing the unspoken. Talking about our fears, about climate change, and about Antarctica, about the iconic symbolism of our last great wilderness. Of peace and of science. Of what the world could be if we can just imagine better.

For talking is a radical act. Through dialogue we resolve the conflicts within and between ourselves. We heal the rift between us and the environment we have forgotten we are an inextricable part of. And in doing so we change the world. We can all be heroes. Not just for one day. But forever.

Ed Gillespie is Co-Founder of www.wearefuterra.com, author of 'Only Planet - a flight-free adventure around the world' and in the Antarctic...

This blog is part of a series. Read other instalments via the author's profile page.