People never seem to get tired of listening to what chef-turned-TV-personality Anthony Bourdain has to say. Luckily, Bourdain never seems to tire of speaking his mind. In a Reddit Ask Me Anything chat on Monday, Bourdain answered questions ranging from how he managed to get celebrity chef Alton Brown into a strip club, to the worst hangover he ever had from his show "No Reservations."

In a January 2013 episode of "The Layover," Bourdain and Brown did indeed to go a strip club in Atlanta. On Reddit, Bourdain calls it his "proudest accomplishment." "Im sure the people at Food Net were browning their shorts," he wrote.

Not all of Bourdain's comments were cheeky, although we do appreciate a good Rick Steves bong joke. Bourdain defends himself for participating in ABC's "The Taste," the less-than-stellar (oops, did we just say that out loud?) "Voice" rip-off that revolves around food instead of singing:

I liked the idea that it was the most unlikley thing I could do. That it was scary and probably foolhardy to try. And I'm good friends with Nigella and Ludo so I knew it would be fun. I had a LOT of fun doing it and would do it again in a hot second. It's like being asked to fly a fighter jet. I dont know how, never have before--and its probably a bad idea...But who wouldnt if given the chance?

Anyways, I hate to be the one to say it, but, The Taste? Seriously? Ten years ago you would have been mocking the crap out of yourself. How did you decide to take on a project like that?

Bourdain's response? "This bus makes many stops. I have no expectation that you will like all of them."

PHOTO GALLERY
The Best Quotes From Bourdain's AMA
Download
Calling all HuffPost superfans!
Sign up for membership to become a founding member and help shape HuffPost's next chapter
Join HuffPost 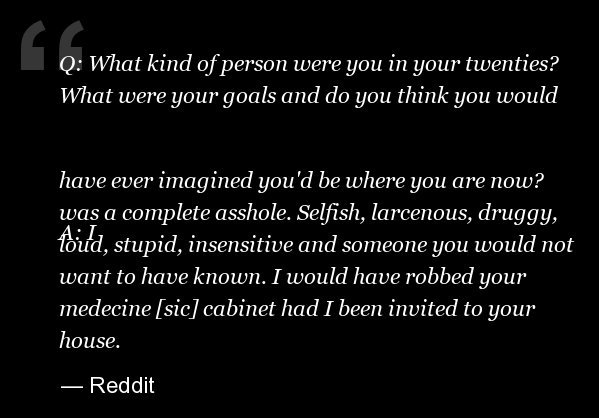