For Bon Appétit, by Belle Cushing.

There's nothing Anthony Bourdain won't eat -- still-beating cobra heart in Ho Chi Minh City, seal eyeballs in Quebec -- but there's one place you won't see him eating: on a plane. We talked to the host of CNN's Parts Unknown about this and other rules for for the road, plus a few of his favorite meals both abroad (spicy noodles, always) and at home. What's the best dish you've eaten in recent memory? Anytime I'm eating spicy noodles in a bowl, I'm happy, but one of my favorite things is laksa in Borneo, at the same coffee house where I first had it more than ten years ago. This was the first time I was back in Borneo since, and it was number one on my to-do list. What dishes do you find yourself craving long after? There are certain dishes that are only really done right in the place where they come from. Vietnamese noodle soup from Huế. That's something I crave. Kuching-style laksa. Singaporean chicken rice. Good mapo dofu from Chengdu in Szechuan province. Hell, a pastrami sandwich! If I'm away from New York long enough, I need a correct pastrami sandwich from either Pastrami Queen or Katz's. And you're not getting that anywhere else, as far as I'm concerned. What about when you get back? Do you look forward to home-cooked meals? I look forward to cooking for my daughter. If I were to make something at home for a family meal, it would be linguine with white clam sauce. It makes me happy to cook it, and it goes over well around here. Okay, let's talk rules for the road. Is it okay to bring food on a plane? If you want to be the most despised person in the cabin, bring some good barbecue on and have everybody in the plane smell it. I brought some Joe's BBQ on the plane from Kansas City once, and the look of pure loathing on everyone's faces as I gnawed on my ribs--I wouldn't care to repeat it. 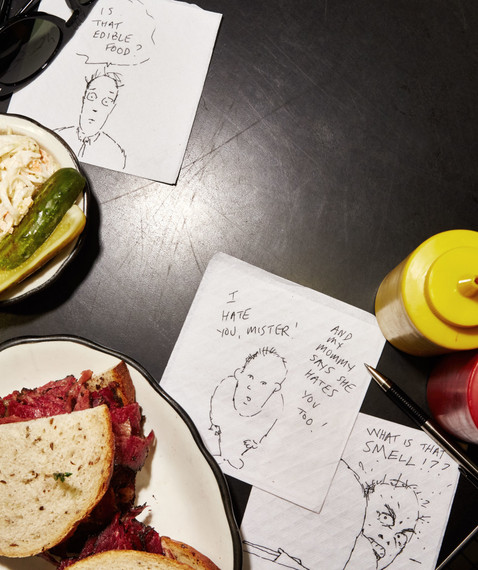 Drawn in New York on February 16, 2016. Photo: Danny Kim Do you eat the plane food? Never. No one has ever felt better after eating plane food. I think people only eat it because they're bored. I don't eat on planes. I like to arrive hungry.

What's your coffee strategy on the road? There are few things I care about less than coffee. I have two big cups every morning: light and sweet, preferably in cardboard cup. Any bodega will do. I don't want to wait for my coffee. I don't want some man-bun, Mumford and Son motherf*cker to get it for me. I like good coffee but I don't want to wait for it, and I don't want it with the cast of Friends. It's a beverage; it's not a lifestyle. When you arrive in a new city, where do you go first, to get a feel of the place? I go to the central market, very early in the morning. I like to see what's in season, what they're selling. The little businesses that pop up in those places to feed the merchants from the market are pretty helpful. I get an immediate sense of what's going on in a town and what the food's like. What's your drinking strategy? Don't drink at your hotel. Find out where the people who work at your hotel do their drinking. How do you navigate street food? If you're in Singapore and there are two chicken and rice places, and there's one with a huge line, go to the one with the huge line. Already, that's a clue. If a place is crowded, but the people lining up are not local, that's a clue--a bad clue. If it doesn't have signs in English. it's almost always worth investigating. I look to see if locals are willing to inconvenience themselves and wait in line for a long time to get something that only costs a dollar fifty, especially if it's a mixed bag of different incomes. One of the things that's interesting about Singapore is that you'll see people roll up in a Mercedes and stand on line behind someone who lives in a housing project. They're both gonna wait the 25 minutes for the same nasi lemak.

Do you ever smuggle edible souvenirs home? I'm always tempted in Spain to bring a whole ham back in my laundry. And French cheeses too. I tend to like cheese from the stinkier end of the spectrum, so that's problematic for me. I generally don't bring food back, but if there were something that would tempt me, it would be a whole Iberico ham. Is ordering room service ever okay? No. For breakfast, maybe. I don't really eat breakfast, but having coffee and some croissants in the room is always nice. But if you really want to send yourself into a tragic spiral of depression, call down for a room service hamburger when you're alone in your room. You will inevitably be disappointed and more than likely sent into a manic-depressive state for days. How do you "get in" with the locals? Generally speaking, there are countries where total strangers will invite you into their homes. In Tehran, just by virtue of being an American, you will probably be invited to dinner. I'd say, just be open. Don't be afraid. If it's appropriate to drink alcohol, drink heavily. Be smart, but be open to the world. Are you more about roughing it, or do you like a nice hotel? If I'm in Misrata in Libya, or the Congo, I'll stay where I have to stay. I've stayed in bombed-out buildings, with nothing resembling a light bulb or a toilet. But if there are hotel options--I travel over 200 days a year--good plumbing has become very important to me. If there is a comfortable bed and good plumbing, I don't need to go all Indiana Jones unnecessarily. I spend enough time doing that anyway.

What place has had the best plumbing? It's all about Japan, man. When we're in Japan, my whole crew shows up to work 45 minutes late just because of the Japanese toilet experience. They just can't tear themselves away. The seat is warm, they clean themselves, they clean you. Some of them play music. The shower and bathing and soaking experience in a hanoki wood bath, they've really got it figured out.

What won't you try? I'll try anything. If I'm in a city with potentially untreated water, I'll avoid salad. But if it's a busy street stall serving mystery meat and a lot of people are eating it, I'll eat it.

What can't you say no to? Show me a bowl of spicy noodles, and I'm all over it. Where do you travel when you're not traveling for work? I spend so much time on the road that when I'm not working, I try to do something really normal. Whatever normal is, I try to emulate that. I put my family into the car and we drive out to Long Island. I spend time on the beach doing absolutely nothing. I barbecue in the backyard. I don't go out to dinner. I don't go to benefits. I rarely see friends. I putter. I nap. And I do as little as possible.

What place haven't you been but want to go to? I'd like to go to Afghanistan. I'm looking for a window where I can safely get in there with my crew. The north in particular is relatively safe. Where should I travel now? Beirut. The food's delicious, the people are awesome. It's a party town. And everything wrong with the world is there. Hopefully, you will come back smarter about the world. You'll understand a little more about how uninformed people are when they talk about that part of the world. You'll come back as I did: changed and cautiously hopeful and confused in the best possible way. Travel at its best defies expectations. Yes, it's divided. There are Shia neighborhoods, Christian areas--but they all go to the same restaurants. You can go from bikinis by the pool to Hezbollah in an 8-minute cab ride. They all coexist in a weird way. That's part of the thing that makes Beirut so interesting. What should I do there? The food, the food, the food. The seafood restaurants by the shore. Fast-food shwarma. Smoke some shisha. Go to a nightclub. It's a crazy kooky town.