Anthony Cirilo is a graduate of Rutgers-Newark's MFA program in poetry. His poems and reviews have appeared in the Paris-American, Drunken Boat, and The Volta. Together with Billy Tooma, he is co-director of the documentary Poetry of Witness. 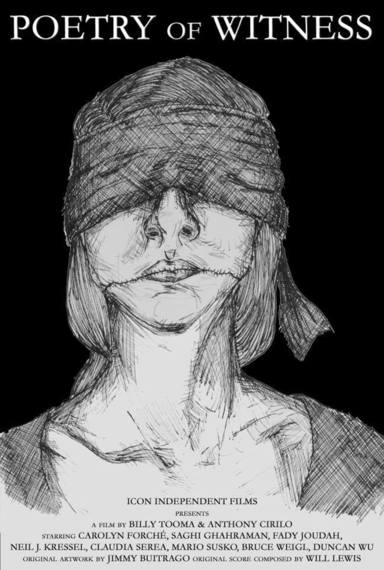 Loren Kleinman (LK): Through the interviews of poets and scholars, the documentary Poetry of Witness sheds light upon those who have chosen poetry to preserve the memories of war, torture, exile, and repression. Can you talk about the connection between poetry and witness? What's the relationship?

Anthony Cirilo (AC): On the one hand, it may be fairer to call this the literature of witness. There's a degree to which the film's title, and indeed any label, constricts, confines, and traps our potential for understanding.

The "x of witness" is a lens through which we can establish extraliterary connections to the text. It's a New Historical framework interested in the ways power creates conditions literature is subject to ("marked by," in Forché's words), and conversely, the ways that same hegemony is challenged by the human outcry it elicits.

Poetry is a remarkable way to shape that cry. Especially in the last century it has opened itself up to the possibilities of form. We may find poems that appeal to us as postcards, lists/inventories, prayers/chants/mottos, aphorisms, prose meditations--on the list goes. Perhaps it is this flexibility of form that allows us (the readers, the audience to atrocity) to feel and be acted upon by the poet. Drawing on Keats' sense of negative capability, we can see how the ambiguities poetry provides space for are integral to speaking out against extremity: they resist the easy dogma of authoritarianism.

LK: The documentary features some powerful poets like Carolyn Forché, Saghi Ghahraman, and Claudia Serea who've experienced personal and familial atrocity. How do each of their stories tell the larger story of witness?

AC: There's much to say about each of these poets and their contributions to the film. Forché discusses her experience traveling with Amnesty International to El Salvador during the civil war and her work editing the landmark anthology Against Forgetting (W.W. Norton 1993). Saghi Ghahraman shares stories of her struggles in Iran as an exiled queer activist, and Claudia Serea's poetry examines her and her family's lives in communist Romania. Serea's father was imprisoned in the Gulag--for writing a poem. What readers will find is a poetry governed by an alert spiritual and moral consciousness, one that testifies to the suffering of others without ironically eclipsing it in the presence of an obtrusive self.

AC: The question of how poets "witness" and choose (or don't choose) to depict extremity is a complicated one. Because the literature of witness is more so a way of understanding or reading than it it is a self-conscious system for writing, the ways readers will appreciate the hows/bys/and throughs of this literature will ultimately depend on the reader's knowledge of the poet's biography, as well as the degree to which the poet has chosen to amplify his or her experience in explicitly recognizable terms. For example, in some instances the poet may testify against specific regimes. When René Char speaks of the SS in Leaves of Hypnos, it'd take a naive or perhaps determined reader to ignore the shadow of machine guns cast across the writing; however, by the same token an astute reader armed only with a close-reading sensibility might overlook the significance of the "storm of roses" in Ingeborg Bachmann's poem of the same title, and "the thunder of a thousand leaves" (trans. Mark Anderson).

Absence and omission are as much a part of the work of poets of witness as the words themselves. Cynthia Cruz has written exquisitely about this principle in "Notes Toward a New Language." I'd also like to take a step back to say that although trauma often imprints itself onto the poet's language, the invitation to read history in and through the poem should not be taken by the reader as a reprieve from careful analysis; we must be vigilant in our reading so as to not reduce the poem to a "patronizing pathology," as Dr. Neil Kressel notes in the film.

LK: Why did you feel the story of witness so vital to tell? What will audiences get out of this act of witnessing?

AC: Poetry will never stop a bullet. It's even terrible relief, in my opinion, for the stress and trauma of modern life. It'd be slightly ridiculous to say that the serious poets of the last century were saved by their writing--in many cases they were imprisoned, tortured, and exiled for it; however, poetry enables us to constructively imagine and inhabit possibilities, to put aside answers and listen. In our culture of desensitization, it's almost radical to feel.

LK: What's next for Poetry of Witness?

AC: Poetry of Witness has screened in Phoenix, Buffalo, Baltimore, and NYC. We're hoping our representation, Circus Road Films, will be able to secure a more permanent home for the film. In the meantime, I encourage relevant institutions to reach out to me. We'd love to bring the film to more schools and communities.