He's best known here in the states as Giles, the librarian and watcher of vampire hunter Buffy, but Anthony Head has had a long and illustrious career. He is currently playing King Uther Pendragon, father of the future King Arthur in the BBC show, Merlin. Though the show is about to enter it's fourth season on the other side of the pond, Season 3 will premiere in the states on the SyFy Channel on January 7th. 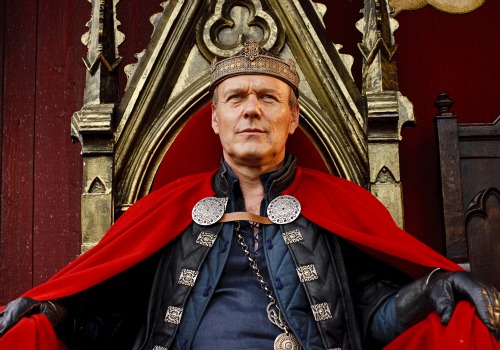 Fans of the show know that Uther has, well, issues. His ward Morgana (Katie McGrath) has disappeared and is about to exact some revenge for Uther's decree to outlaw magic. His son Arthur (Bradley James) is in love with a serving girl named Gwen (Angel Coulby) and his son's servant Merlin (Colin Morgan) is hiding his powers with the help of his only confidant Gaius (Richard Wilson). What's a poor king to do?

I got a chance to chat with Head about the show and what's next for the troubled monarch. He gave us some hints about what we're going to see in Season 3, and working with the cast. He also graciously answered my questions about the proposed (and much railed against) remake of Buffy the Vampire Slayer, the lost spinoff Ripper and the famous romantic coffee commercials people still ask him about. (Check them out here.)

I have to start off by asking about Uther. He's got some serious issues.

I think he may! So what are we going to see happen to him in Season3?

Season 3, it all comes down on him really. All his issues...stuff that comes out about his past...[laughs] He probably didn't know it would have the effect that it has. There are some big old family issues. We start off Season 3 with this mega, two part story that establishes Morgana for what she is and who she is. Uther pretty much becomes a shell of his former self and is haunted by stuff that he's done in the past. It's great because we start off the season with a whoo! Where do you go from there? [laughs] And they do go from there. They take it on. There are some really cool story lines. With some stuff that was really cool to play. You don't expect...you always hope but you don't expect in a family drama, that you're going to get some really good stuff. Stuff that evolves, stuff that hangs on character, that hangs on good story lines to play. Stuff that at this point, three seasons down, you kind of think they might have to resort to the Lost syndrome of just confusing people. Instead of which, this has got really strong through lines and stuff that was...the thing that I always loved about Joss' (Whedon) scripts is that everything had a repercussion. Everything had a consequence. And so it is in Merlin. It's not Joss writing, but it has that fullness. That richness. You know if someone does something bad, and there is stuff that Uther has done in his past that is bad, you know it's going to come out somewhere. And it really really does.

I talked to Katie McGrath the other day and she said she feels really bad about being a bitch to you in your scenes.

[laughs] Well, I don't hold it against her! No, it's great. We had some cracking stuff to do. A lot of Uther stuff in Season 3 kind of revolves in one way or another around Morgana. It was great fun. Really good fun. She's adorable and as I say, we had some lovely stuff to play off each other. She says she's a bitch, but I can't say that Uther is exactly Mr. Sweetie Pie.

[laughs] I think it's really interesting, the blind spot Uther has with her. What do you attribute that to?

All I can say is, I think there is more going on than at first meets the eye.

Doing a research for a role like this...is there any sort of research you've done that you've just loved?

As far as Uther was concerned, there is so very little about him. I didn't want to research the Arthurian legend as written, because we've strayed away from it. I mean, I know all the stories and the myths, but what I did largely was to watch other people playing kings. It's fascinating watching people playing kings because some people do it so much better than others. It was watching Peter O'Toole in Becket. He was wonderful playing in Becket, this troubled king, trying to come to terms with what he had to do, what he was supposed to do and what he wanted to do. It translates. The thing that makes it interesting, watching someone play a king is not the power. It's not how they use the power. It's how they manage what's going on inside. The man and what other people perceive as a king. That's why it's fun to play a king. I mean, I see our Queen as fascinating, because you wonder what's going on in her head. [laughs] With all the stuff she has to do and the people that she has to meet. And you think, what does she really think of them. Mind you, Prince Phillip usually says it. He's gotten into terrible trouble for what he's said. But all that, it is very interesting, what's going on with the person inside and what other people see. 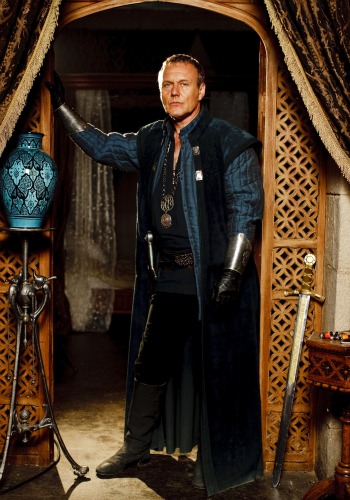 I wanted to ask you about the relationship with Gaius. In a way he's really Uther's only friend.

I don't know if he's a friend, really. He's a confidant. Gaius I find fascinating, and I wonder if it's anything that they will really truly explore...Gaius isn't really whiter than white either. I mean, he obviously stitched up...the Great Purge was actually a lot like the McCarthy witch trials. And I think Gaius stitched up a few friends in order to stay alive and stay in Uther's favor, which makes him equally interesting. He's got a conscience in there. And it's not something we ever really see an awful lot of. I'd like to see more of that. [laughs] It does mean that our stuff together is...there's a lot going on between us. There is a lot more than what is said. There is a lot of unwritten past between us.

I have to ask you about some coffee commercials that you did a while back that I just watched again on YouTube last night.

[laughs] You have to?

Yeah, I really really do. [laughs] Do you still get people talking about that?

Yeah! Strangely, usually only journalists. But when I meet somebody who said, 'Oh, where have I seen you? What have you done?' I'll go through the list of Buffy, and Little Britian and Merlin, then right at the end I'll go, '...or the coffee commercial, ' and they'll go, 'Oh, that's it!' Or recently, I had this guy...I went through the whole list at which point you're thinking, do I really need to go through my resume? [laughs] I said, '...or it's the coffee commercial.' And he said, 'Little Britain [laughs] Okay. No, I'm as fascinated by what was an incredibly iconic campaign. And it's not only created opportunities for me in Britain, but basically it was the reason I went to America, because I could. If I hadn't gone to the states...I'd always wanted to. It created opportunities for me and gave me the reason to scootch out of England for a little while, to create a different persona. I didn't want to be just the coffee commercial guy. It created Buffy and all the rest of it.

Well...speaking of Buffy, I have to get your opinion on the remake that's going around the news.

It's not a great idea.

Oh, thank you for saying that!

It's a horrible idea. It's a horrible idea in as much as Buffy was a great conceit. It was a great story. A great idea. I don't think you can...whether you feel as though you helped it on its way, I don't feel that you can then remake that without the original creator on board. It doesn't make sense. And I mean, somewhere down the line, I suppose sometimes...I suppose you could, but it never sits very comfortably. With someone like Joss, why would you want to? Well, I know why you want to. You want to make money. As he said recently, 'I hope it's good!' [laughs] I love him. 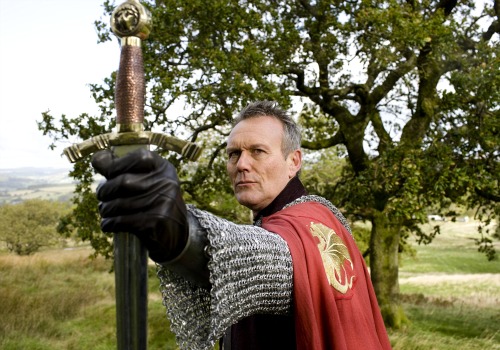 I've been hearing rumors about that Giles spinoff, Ripper again too. Any chance that's happening?

Not unless he comes back as a ghost. In Season 8, the comic book, Giles just died. [laughs] So I think it's R.I.P. Ripper.

Back to Merlin...one of the things I love about the show is how you can go from a deep, dark episode to a really funny one. Last season, you hooked up with a troll. What sort of fun stuff will we see in Season 3?

Baldness. There's a great episode where Gaius becomes inhabited by something that makes him do very silly things, one of which is to make me go bald. But there is also a lovely episode with an actress called Georgia King, where she...well, she almost marries Arthur. But it's a great way of keeping light and shade and keeping it...when it gets a little sort of dark and heavy for the kids, they reward them next week with something light and frothy. [laughs] And the adults don't mind a bit or ribald humor. A couple of fart gags here and there always go down well. [laughs] Needless to say, it bridges that gap. One of the great things about Merlin is that it does appeal to this multi-generational audience. It's a truly family show. Now everybody who comes up to me says they love watching this show, and I especially love that I can sit down with my kids and watch it, and I see stuff that the kids don't. It's just the best. And that's the success of the show.

It was something that Buffy had. And yet the WB never, never ever explored it. They only ever played it to literally a generational band. Their demographic. And they could have expanded it, but because they were tied up with what their demographic was, they blew it on a big level. In fact, that's why Buffy universally...I had people come up to me in their forties and be embarrassed that they watch Buffy. And it's like, no! You don't have to be embarrassed! [laughs] It's for you too! And Merlin goes younger. It goes down to five and six. Kids love it. I think it's the fact that, even if it does get a bit scary and a bit dark, they will be rewarded with a lighter episode.

So what do you think...musical episode of Merlin?

Never say never. I can't quite see how or why there would be, but you never know. Who knows? All musicals aren't always necessarily good. It's another thing that Joss was ground breaking on, really when you think about it. Nobody had really make musicals work on TV like that before. Now we've got Glee and all that stuff and who knows whether it was down to Joss, but it was the first TV show to actually...they'd tried it so many times and it always felt clumsy and sticky. But he really pulled it off.

Merlin Season 3 premieres on January 7th at 10/9c on SyFy.