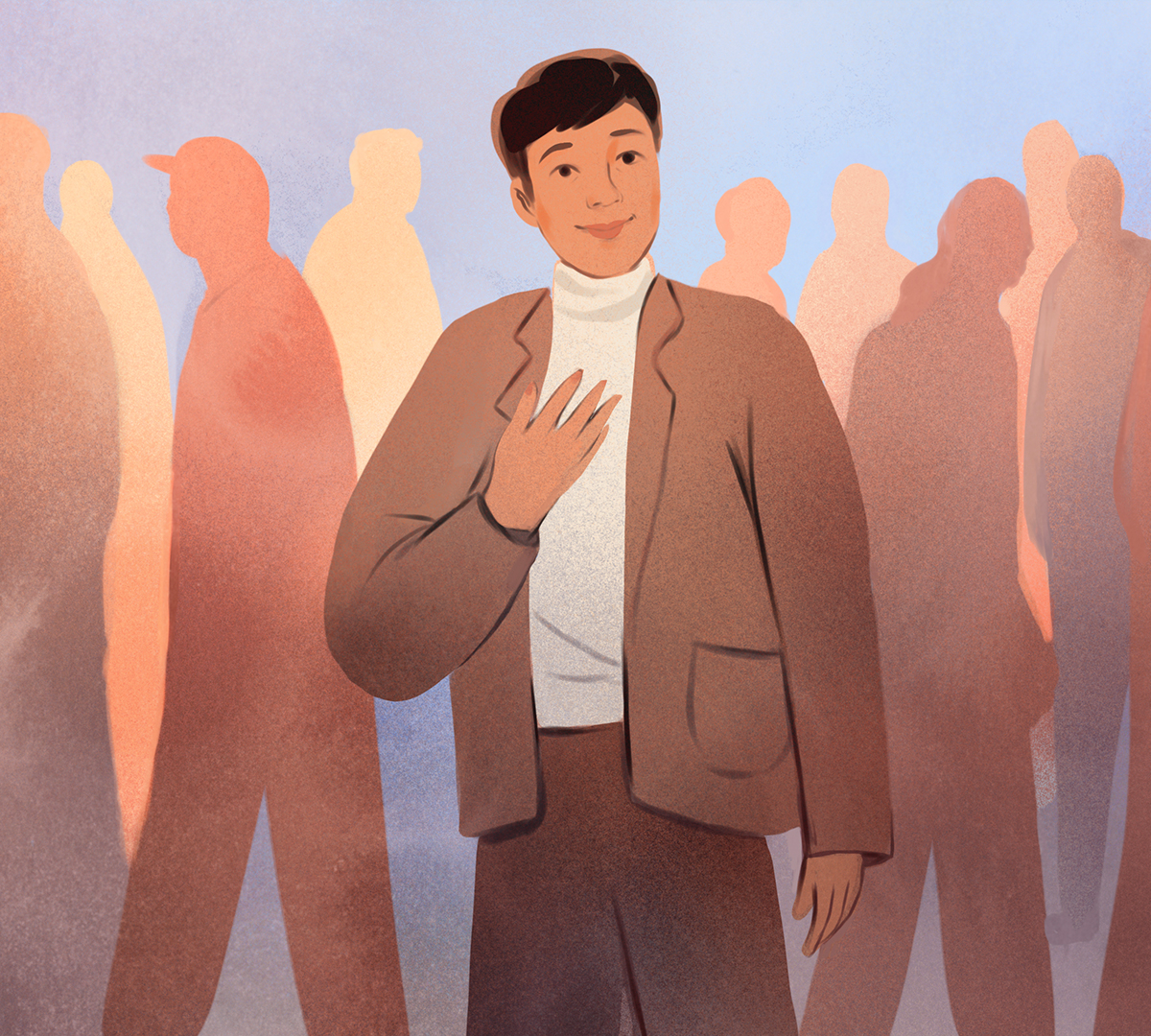 Catherine Shieh teaches people over Zoom how to support and comfort victims during harassment attacks.

Three years ago at a crowded BART station in Oakland, California, educator Catherine Shieh was waiting for a train when a man approached her, asking for spare change.

When Shieh, who is Taiwanese American, told him she didn’t carry cash, the man swung his fist and knocked her over. Then he started punching her.

“I was knocked over to the ground,” she told HuffPost. “I just curled up like a little ball because I didn’t want to be held liable for assault myself in case I were to defend myself.”

When the flurry of punches stopped, the man shouted a message to Shieh as he ran away: “If you call the cops, I’ll find you and I’ll kill you.”

“That’s had a long-lasting effect on me and the way I move through public spaces,” the San Francisco native said. “I have an incredible amount of anxiety, a little bit of agoraphobia and I struggle to take public transit, which was never really an issue for me in the past.”

The incident happened on a Saturday. There were many witnesses nearby, but no one intervened or checked on Shieh. It wasn’t until a week later, when Shieh called the BART police, that she found out three strangers had called and reported the incident on her behalf. (The assailant had a history of assaulting Asian women and the elderly, the police later found out.)

Looking back, Shieh said that there was part of her that felt relief there had been witnesses, ready and willing to document what they had seen. Still, she wished they had come up to her directly when she was lying on the ground, curled up in a little ball and legitimately scared.

“I think there’s a difference between just reporting it quietly and actually being able to go up to the person who was just harassed to see if there’s a way that you can support and comfort them,” she said.

“In these moments, you don’t always have to be direct in your interventions or interaction. Get creative: Make a loud sound or drive your car up to where the incident is happening.”

Today, Shieh teaches people to do exactly that in some increasingly popular bystander trainings she leads over Zoom. The 28-year-old is the anti-hate training coordinator at the nonprofit organization Asian Americans Advancing Justice Chicago. It’s a relatively new job; up until August, Shieh had been an ethnic studies high school teacher in Los Angeles for five years.

As COVID-19 spread and anti-Asian attacks surged across the country, the Chicago nonprofit tapped Shieh to spearhead its anti-hate education efforts with the public and with private organizations.

It’s a job that fuses many of Shieh’s passion points: politics and policy as well as teaching and facilitating learning in novel, creative ways. The classes ― which are attended by Asian Americans and others just looking to help ― are heavy on bystander training, but they also delve into race and the xenophobia and exclusionary laws that made Asians and Pacific Islanders the nation’s first “undocumented immigrants.”

For some attendees, this might be their first exposure to a history that’s all too often given short shrift in history classes. Shieh relishes the chance to dig into it.

“A lot of times I feel like this is the only type of job for me,” Shieh said. “Many people think that talking about race and identity would be difficult, but if done well, I actually find it quite liberating. I really like being a part of these conversations with people.”

As attacks continue, the demand for bystander training is growing

The classes, conveniently offered over Zoom for people across the country, are of course sorely needed right now. Since the beginning of the pandemic last March, there have been nearly 3,800 hate incidents reported against Asian-Americans and Pacific Islanders, with many of the crimes occurring in the Bay Area and New York City, according to advocacy group Stop AAPI Hate. Because these numbers are self-reported and some victims may not speak English, community advocates say there are likely far more cases that haven’t been logged.

In recent months, Shieh said her group has seen a huge uptick in attendance at its public trainings, which are put on in partnership with the Chicago chapter of the Council on American-Islamic Relations (CAIR) and Hollaback!, a New York-based anti-harassment nonprofit.

In early February, attendance for the virtual workshops was in the teens or dozens, she said. A recent session in April was attended by 500, the max Zoom would allow. Another training that month had over 2,800 registrations. (Shieh said those who are interested in attending a free class should periodically check the Asian Americans Advancing Justice Chicago website for new training dates.)

The trainings start with a quick poll asking participants if they have experienced or witnessed any anti-Asian American harassment as of late. In that recent April session, 42% said they’d seen or experienced verbal harassment ― slurs or being told to “go back to your country.” 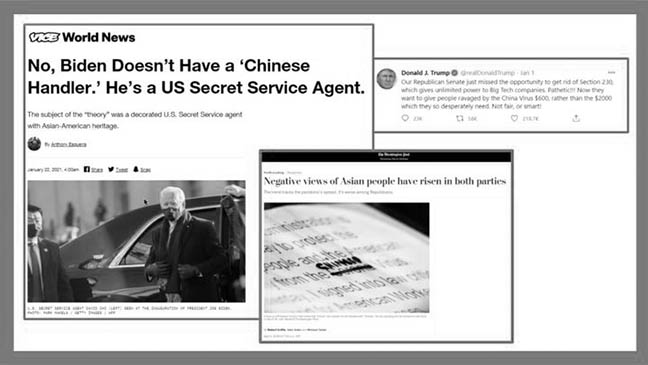 In the sessions, Catherine Shieh and her co-trainers discuss how events in the news shape public opinion about Asian Americans.

Then, the instructors delve into real-world scenarios and go over the “5 Ds of bystander training.” The five ways they talk about intervening when you witness harassment or physical violence in public are: distract (by asking for directions, for instance); delegate (ask for help); delay (check in on the harassed person after the incident is over); direct (speak out directly to the attacker) and document (video or audio record).

The “5 Ds” are important, but mostly, Shieh tries to impress on attendees that doing something ― almost anything ― is better than doing nothing. (That kind of inaction was on full display in April, when two security guards at a hotel near New York City’s Times Square watched and did nothing to help a 65-year-old Asian woman who was being beaten in broad daylight by a man because of her race.)

“In most moments, you don’t always have to be direct in your interventions or interaction. Get creative: Make a loud sound or drive your car up to where the incident is happening,” Shieh said. “You don’t necessarily have to [be] direct [with] the person who is doing the harassing.”

Karen Eng, the CEO of an engineering firm in Chicago, attended a training in February. She’s read about the attacks against Asian Americans and also has a cousin who was racially profiled early in the pandemic. (While waiting to board a plane at John F. Kennedy International Airport, Eng’s cousin, who is Asian American, was asked to move farther away by three men who said they were concerned about getting the coronavirus from her.)

What Eng most appreciated about the bystander training was that it gave people options as to how to respond in these high-tension situations.

“There’s not one answer for the solution; you can act based on the circumstance or how you feel,” she said. “But you have choices. The more you are presented with them, the easier it will be to handle.” 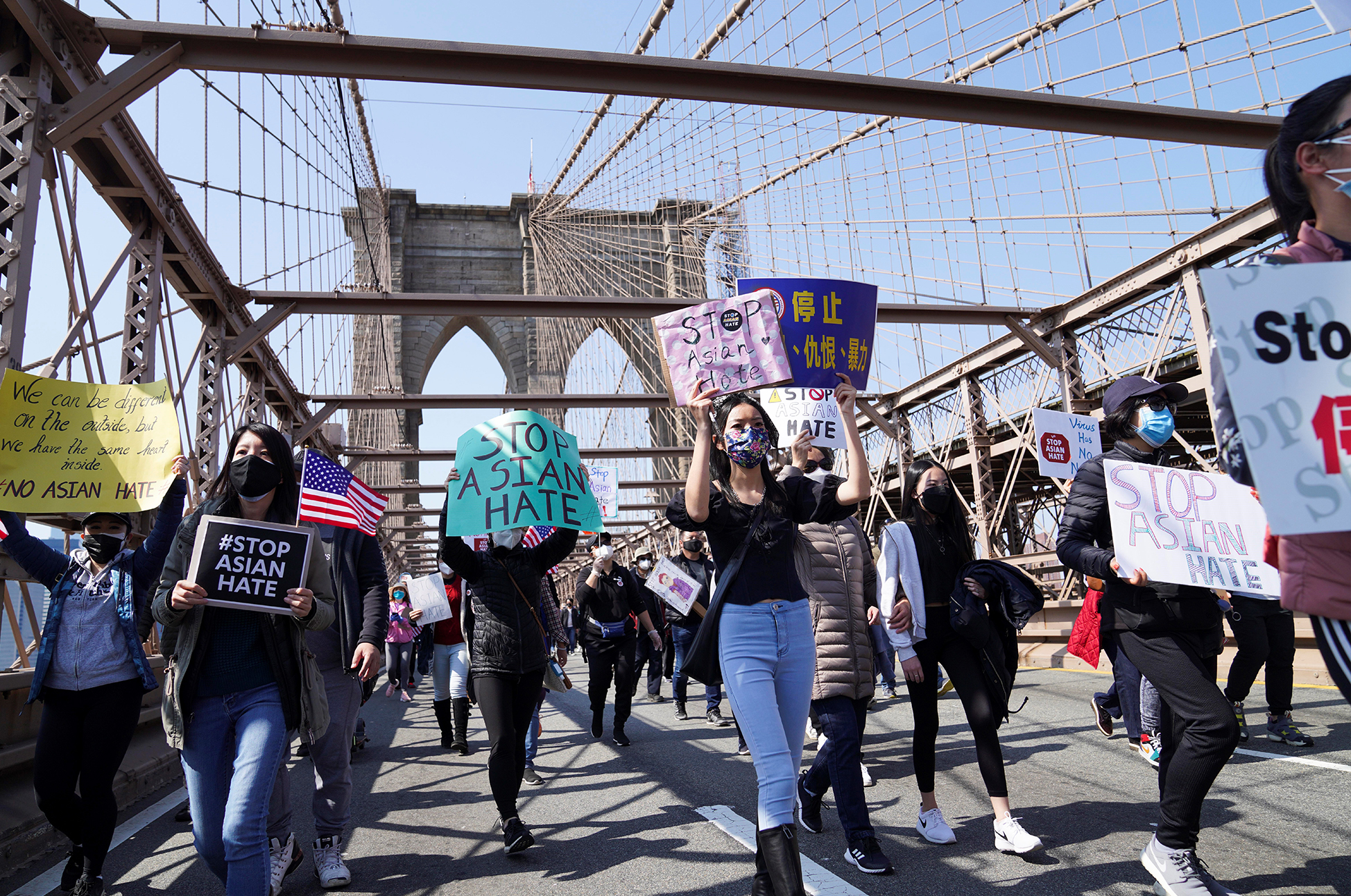 People march to protest against anti-Asian hate crimes on Brooklyn Bridge in New York on April 4, 2021.

Eventually, Shieh and her team hope to expand the program so it’s taught in different languages. They also want to offer more age-appropriate workshops for kids. (One poll in September found that 1 in 4 Asian American youths have experienced racist bullying since the coronavirus pandemic began.) And given that so many of these attacks are against older Asians, she’d also like to get more seniors in attendance.

Jorge Arteaga, the deputy director of Hollaback!, told HuffPost he admires the way Shieh has pushed to make the trainings more accessible and relevant to different audiences and communities.

“Cat is insightful and thoughtful with this,” he said. “She’s able to be vulnerable and uses her own experiences in order to invite others to connect to the work. Her dedication and commitment to the work and the community are instrumental in the anti-hate work she’s doing.”

“I obviously want everyone to take a bystander intervention training, but I don’t want that to flatten the Asian American experience,” she said. “We are more than just an issue. There’s a string of other issues that we’re all fighting for ― other systemic racial injustices. I think this is only the start of a longer fight.”