"If there's one thing missing in our country, it's an acknowledgment of the broad humanity of black folks. Racism--and anti-black racism in particular--is the belief that there's something wrong with black people." --Ta-Nehisi Coates 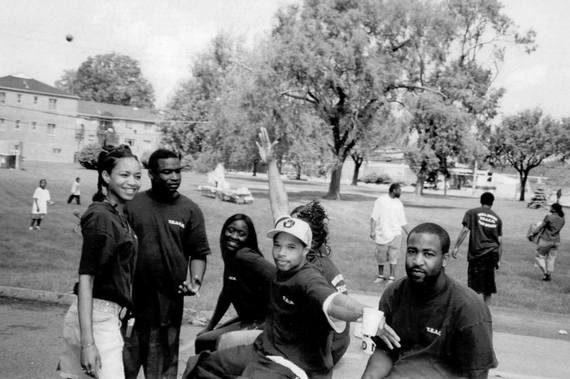 I owe my existence to black people. You see, my mum was engaged to another man, Michael Dabbs, before my father. "If a black man walked into a bar, I'd walk out," said Dabbs in 1949. My mum was mortified upon hearing these words. Shortly thereafter, she called off the engagement. Luckily, many years later, she met my father. If it weren't for her principles, I wouldn't be here.

In 2002, I bought and moved into a 1,100-unit Columbus, Ohio housing complex called Woodland Meadows, where the majority of residents, employees, and ex-felon workers were African American. My father is Argentine and my mother is British, which makes my skin a very light shade of Hispanic or a slightly dark shade of white, depending on one's perspective. My name is Jorge, but I don't speak Spanish. I go by "George," but I check "Hispanic" on loan applications. I am a minority business owner and my wife is African American.

At Christmas, we usually visit my wife's family first. Their Christmas dinner is the same as my family's dinner, and I suspect the same as most families' dinner: food, drink, conversation, presents, maybe a glimpse of a Lakers game on TV, and lots of love.

Most of the hundreds of ex-felons who worked at Woodland Meadows were young African American males. If I walked past any of these guys in a dark alley, my heart would beat faster and my gait would quicken. The reaction is subconscious, the result of growing up in an America where the villains on TV and other media tend to be African American while whites are frequently portrayed with positive imagery. Many news outlets pander to the white majority and perpetuate the perspective that whites may commit crimes, but African Americans are criminals.

Describing the heart-wrenching agony as thousands of African Americans cried for help from rooftops, bridges, and anywhere else dry in New Orleans following Hurricane Katrina, the African Independent observed that the white majority's pain subsided once news was broadcast of African Americans looting stores for food, water, diapers, and baby formula:

[The] Majority of White Americans who were heart broken by images of a Black third world at their doorstep coasts and neighborhoods could henceforth sleep at last with the customary belief that Blacks deserve what happens to them, as they are thugs and thieves, unrestrained looters...

Fascinatingly, as media images of New Orleans' African American residents wading through hurricane-induced floodwaters with "looted" food were broadcast around the world, whites were described as having "found" food. The best excuse for mistreatment of African Americans is to blame African Americans.

According to FBI statistics, between 2005 and 2012 in the United States, white police officers killed an average of two African Americans per week. This is almost like a national weekly quota: write a certain amount of speeding tickets, harass a certain number of minorities, and kill two African Americans. The actual count is likely much higher, as only 750 of the 17,000 law enforcement agencies in this country voluntarily report to the FBI's database.

The majority of these are treated as "justifiable homicides" because the victims are blamed for getting killed. In the United States, African Americans are typically assumed to be at fault, no matter how minor the offense. Even when African Americans clearly do well for the community, credit is often muted or even misappropriated by white people. Almost 500 African Americans and Hispanics perished in the 9/11 attacks, including firemen, bankers, security guards, and many others. However, 9/11 commemoratives and memorials have been largely devoid of minorities. LeRoy Wilson Homer Jr. was an African American pilot, husband and father flying United Flight 93, which was downed by terrorists. Yet when the critically acclaimed movie United 93 was released in 2006, Homer was depicted by a white actor.

At Woodland Meadows, hundreds of African American men were busting media stereotypes and making a legal living, learning new skills, and contributing to their families and their community. The men involved perpetuated positive change, and other men facing comparable obstacles received similar opportunities. In the wake of Woodland Meadows' demise, the loss of its ongoing showcase for the success of these African American young men proved to be the ice storm's greatest calamity.