In light of the upward trend and increased awareness of body positivity as an issue (alternately described as "anti-body shaming"), women have posted online unaltered photos of themselves at various weights. Platforms for this celebration of the female form, once relegated to Rubens paintings, now extends to hit TV shows to viral YouTube videos and blogs. Also enlightened are some health and beauty brands, such as Dove, that are realizing with increased frequency that their product brands need to be more inclusive of different women with various figures.

SlashedBeauty.com, an advice blog devoted to saving money on fashion products, recently posted such a piece by its founder, Miranda Mendoza (who was named by Allure magazine as "most buzzworthy blogger"). She poignantly underscored her article on "body shaming" with a photo of herself, unphotoshopped. In her article, she wrote regarding an odd phenomenon: people who have a sense of entitlement to police other people's bodies. She added that the stigma of being overweight is perpetuated by the media and is based on what has been aesthetically pleasant "to the masses," yet doesn't take into account the reasons one may have a different shape or size -- just that it's wrong to be different.

My interest in this topic surpasses simply attributing it to my own size ("zaftig," as well as beautiful by most non-weight-based standards). Case in point, I was meeting with a friend for lunch who was bemoaning her weight and the effect she thought it was having on her love life. I brought up my weight and my recent marriage, suggesting that she can't exclude romance because of a number on the scale. Her response was, "Yeah, but I don't want to date a freak." This stopped me mid-bite. Was my husband a freak just because he fell in love with me? After processing that she was being prejudicial, I realized that my husband was not aberrant, but rather simply did not rule out a potential love interest based on what my mother would call "rolls." Instead, he appreciated my "whole" and not just the sum of my parts.

Of course it is important to have healthy eating habits and to exercise -- I know this well as a nurse practitioner -- but people don't and can't assume they know me, or anyone else for that matter, based on body size. The public with whom I deal on a daily basis, as well as people in my own community, do not know, for instance, that the only medication that works for a chronic illness from which I suffer is one that causes weight gain. So it doesn't matter how much I watch my weight -- I will continue to gain as long as I continue to take this medication. Few also know that due to my shame concerning my weight, I underwent a dangerous weight loss surgery some years ago that eventually caused me to become septic and nearly die. Yet, despite these arduous efforts, most people don't see me as 100 lbs less than I once was, but rather 60 lbs heavier than what they consider "healthy" or, as some might argue, acceptable.

It is indeed heartening to see more positive awareness of differences in body types. On the last season of Homeland, "Peter Quinn" (a central character, who is fit and muscular) becomes sexually involved with a woman whose size is unaccustomedly the object of desire on primetime TV. This transcends the habit of romantically pairing people on television with people of similar sizes (beginning around the time of Roseanne's popularity and as current as Mike and Molly). Particularly interesting is a sex scene between the two lovers that showed her belly and legs and at which I was initially shocked. After extensive thought, I came to believe this was the filmmakers' intent. I realized that I had a visceral reaction to the scene, not because of the woman's weight, but because it was depicted in a sexual manner as in a scene between two "normal" weight folks would be, without commentary about it from the characters. Later in the episode, "Quinn" fights for and defends her when two men engage in "body shaming" at her expense. Upon deeper consideration, I realized this is form reflecting content. How many folks saw the earlier scene and laughed, later only to be presented with the fight scene following the bullying characters' own laughter?

"Your body... does not dictate the amount of happiness, success, or love you deserve," Mendoza wrote on her blog. The reality is, despite what some in the media and on Madison Avenue would have you believe, there is not one body type that is good, bad, acceptable or unacceptable. People's sizes and shapes are as diverse as their personalities. It is important for society and representations of society (read that as television, movies, ads, etc. ) to match the diversity of the people they seek to engage. 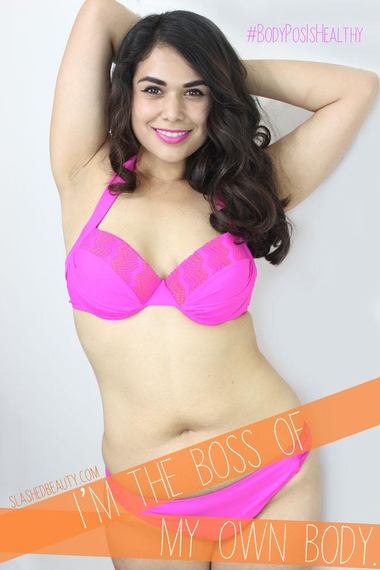