LONDON -- Now is not the time to be a politician in one of Europe's established political parties. Across the continent, interlopers are breaking into the halls of the power. In southern Europe, new parties are emerging to campaign against austerity; in the north, they are rallying against immigration and the European Union. In many ways, Syriza in Greece and Podemos in Spain are neatly mirrored by UKIP in Britain or the AfD in Germany. Denmark is the latest country to see the surge of discontent overcome established parties.

Helle Thorning-Schmidt's center-left alliance was defeated -- narrowly -- by the center-right coalition in the recent election. But the bigger story was the rise of the Danish People's Party, a right-wing populist party in the mold of UKIP. Its support rose dramatically to 21 percent, overtaking the mainstream center-right Liberal Party to become the second party of Danish politics. In the face of such a populist surge, the traditional parties that have long divided up Danish politics between them only barely gathered up half the votes cast. At the other end of the continent, all European eyes are on Alexis Tsipras, Yanis Varoufakis and the Syriza coalition that dramatically swept aside the old guard in Greek politics earlier this year. At first glance, Syriza and the DPP could not be more dissimilar, but their origins are remarkably alike. Both have successfully redefined politics as not an argument between left and right, but between elites and the people.

The rise of these insurgent parties has both an economic and a cultural component.

Their success emerges from the economic trends detailed most eloquently and extensively by Thomas Piketty in "Capital in the Twenty-First Century." Across Europe, urban voters from former industrial heartlands, concerned about immigration and marginalized by a globalizing economy, are turning out to vote for these new parties.

"These voters have been abandoned by the mainstream parties, which are becoming 'cosmopolitan' and 'metrosexual.'"

The other group that many insurgent parties appeal to is rural voters put off by the liberal social values being adopted by mainstream parties. As London School of Economics Professor Simon Hix argues, these voters have been abandoned by the mainstream parties, which are becoming "cosmopolitan" and "metrosexual." Parties of the left are now increasingly dependent on public sector workers and those in cultural industries, while those of the right struggle to extend their appeal beyond business and finance.

It is interesting to see how successfully Denmark's populist surge married these two constituencies. By making immigration a mainstay of its political discourse over the last decade, the DPP managed to make itself a significant, but ultimately limited part of the Danish political landscape. But in this election, it put its faith in a more centrist leader, who sought to reinvent the people's party as a voice of the "left behind." It was able to hoover up votes from Jutland -- Denmark's large, rural peninsula -- which suffers from lower growth than Denmark's cosmopolitan, metropolitan areas. By arguing that the government should stop spending money on refugees, migrants and foreign aid, and instead halt plans to cut Danish benefits, they campaigned under the slogan, "Du ved, hvad vi står for," which loosely translates as: "You know what we stand for."

"You know what we stand for."

The surge of these kinds of insurgent parties has been made possible by the way that the mainstream parties have changed in recent decades. The late political scientist Peter Mair wrote an extended essay, "Ruling the Void," about how conventional politics has become alienated from the societies being governed. According to Mair, the mainstream political parties have abandoned their familiar functions of expressing their supporters' views or representing them. Political movements that were once part of civic life have now become appendages of the state -- a governing class that seeks office rather than a chance to represent ideas or groups in society. This is the void that insurgent parties are trying to fill: acting as channels for popular anger rather than governments-in-waiting. In fact, Reuters reported that the DPP's leader, Kristian Thulesen Dahl, said:

He has spoken openly about wanting to avoid the fate of political movements such as the British Liberal Democrats or the Norwegian Progress Party that were squeezed by the compromises of government.

Europe's mainstream parties are now, somewhat belatedly, promising to listen to their discontented voters. But it is, by definition, hard for politicians to appeal to an anti-political mood. The challenge facing these established political parties will be to find a way of engaging the disengaged without ignoring their concerns or imitating the insurgent political forces. That is exactly the balancing act that the Danish Social Democrat leader Helle Thorning-Schmidt tried to take on -- a challenge that was ultimately her nemesis.

PHOTO GALLERY
The Far Right In Europe
Download
Calling all HuffPost superfans!
Sign up for membership to become a founding member and help shape HuffPost's next chapter
Join HuffPost 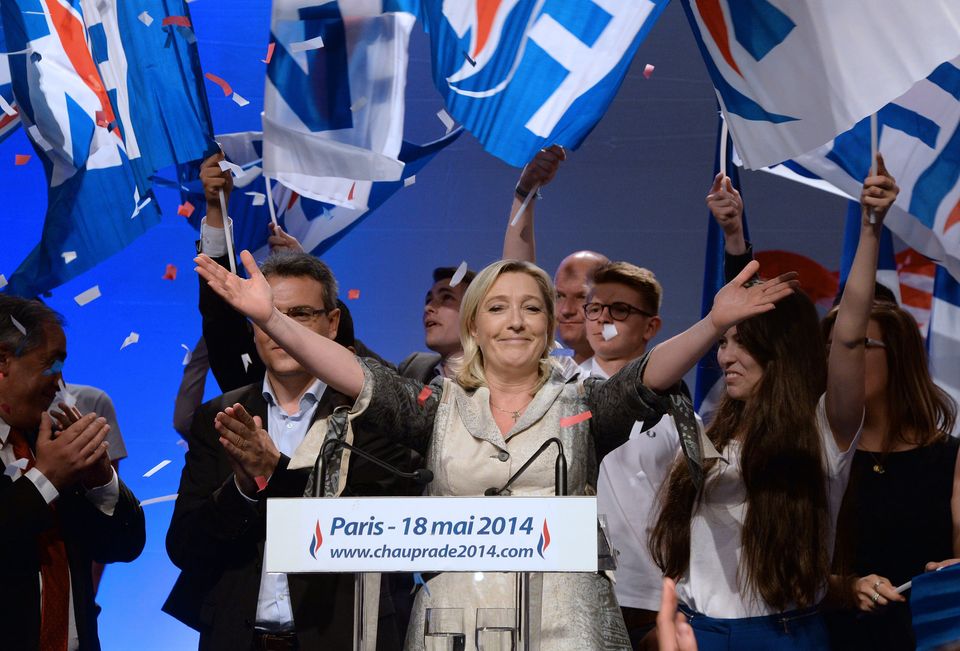 1 / 10
Front National (France)
Marine Le Pen has had to work hard to de-toxify her fair right party, including censoring her own father and the party's founder. Jean Marie Le Pen suggested only last month that "Monseigneur Ebola" could sort out Europe's immigration issue "in three months". He has regularly been convicted under France's race hate laws, and has called the Nazi gas chambers a “small detail” The party took a quarter of the vote in France, with its popular anti-immigration platform.
Getty Images