New York City's resident Islamophobe is back with yet another anti-Islam subway ad. Pamela Geller's latest features a photo of the World Trade Center exploding in flames next to a quote from the Quran that reads, “Soon shall We cast terror into the hearts of the Unbelievers.”

When Geller last bought ad space in the NYC underground, New Yorkers didn't react too kindly. Nearly all of the signs-- which read "In any war between the civilized man and the savage, support the civilized man. Support Israel. Defeat Jihad"-- were vandalized.

As a result, The Observer reports Geller doubled her ad buy this time, and that "the new ads will be plastered across at least 50 different locations."

"I refuse to abridge my free speech so as to appease savages," she said.

Additionally, Geller's latest bout of vitriol will come with a MTA disclaimer:

"A cost of opening our ad space to a variety of viewpoints on matters of public concern is that we cannot readily close that space to certain advertisements on account of their expression of divisive or even venomous messages,” the MTA stated at the time of the "savages" ad. “The answer to distasteful and uncivil speech is more, and more civilized, speech.”

The MTA had previously rejected Geller's "savages" ad, saying that signs, according to the Associated Press, "should not demean individuals or groups based on race, religion or other protected categories."

Geller sued over the rejection and a judge ruled that the MTA standards violated the First Amendment.

Geller's ads are paid for by American Freedom Defense Initiative, the umbrella organization for the Stop Islamization of America, which has been designated by the Southern Poverty Law Center as a hate group.

(You may also remember Geller from her role in the "Ground Zero Mosque" non-controversy.)

Check out some of her other signs below. Also, check out a sign made in response to Geller's. 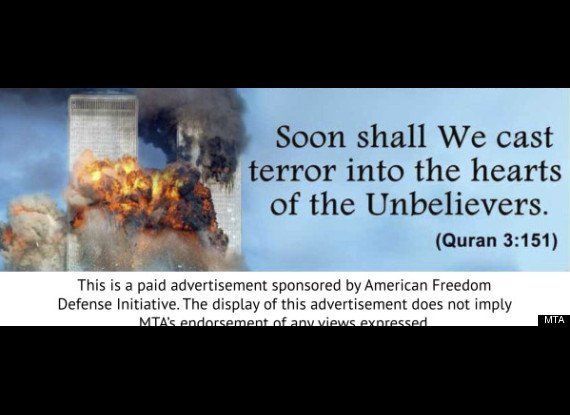 1 / 4
Anti-Muslim Ads Go Up Again, Featuring Burning WTC
In January, American Freedom Defense Initiative bought advertising space to feature these ads with the <a href="https://www.huffpost.com/entry/anti-muslim-ads-new-york-city-subway-american-freedom-defense-initiative_n_2438881" target="_hplink">image of a burning World Trade Center.</a> A quote attributed to the Quran is placed adjacent to the image saying "Soon shall we cast terror into the hearts of the unbelievers."