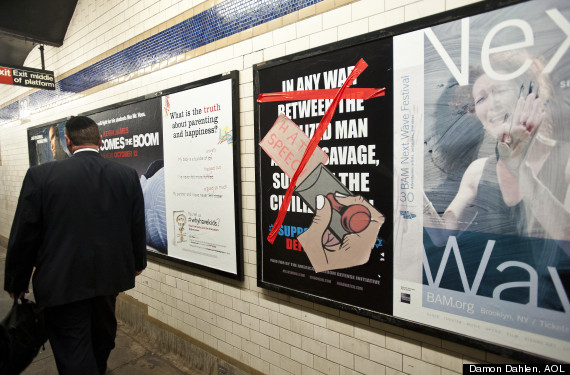 On Monday, anti-Muslim advertisements sponsored by the American Freedom Defense Initiative went up in 10 subway stations in New York, following a federal court decision that determined the ads were protected under the First Amendment.

By Tuesday morning, at least seven of the ads had been altered by a street artist, according to Philip Weiss of news website Mondoweiss. Partial cover-ups denouncing the ads as "racist" and "hate speech" appeared despite a heightened police presence in subway stations due to the campaign, the New York Post notes.

According to Weiss, one of the altered ads is "right next to a police station" at the Port Authority. The cover-ups are similar to those that appeared in reaction to the ads when they ran in San Francisco this summer.

AFDI Executive Director Pam Gellar, whose organization spent $6,000 on the ads, dismissed concerns about her campaign when interviewed by WPIX.

"They are accusing me of thought crime," Gellar said.

But Muslims and Jews in New York consider the ads racist and counterproductive, WPIX reported.