In the small town of Hanson, Mass., two large anti-Obama signs are stirring up controversy, the Enterprise reports.

Both signs contain harsh language and imagery, which have been met with mixed reactions by people in the area.

One features a pouting little girl shown giving the finger, presumably to President Barack Obama for his alleged fiscal recklessness. 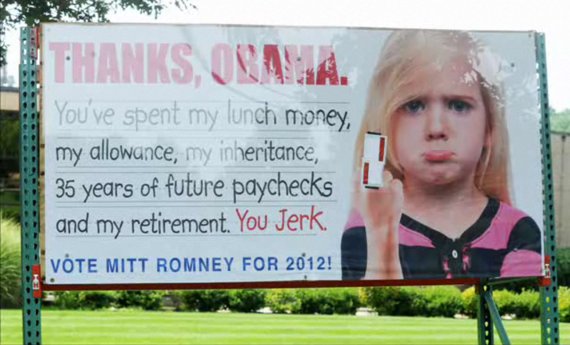 Eric Folsom, a father from a neighboring town, told the Enterprise of Hanson that it could put him in a tough spot when he passes by with his 6-year-old daughter.

“If she saw that, she’d say ‘Why is that little girl doing that? What does that mean?’” he said. “How do I explain that?”

The other sign stands outside a motorcycle shop owned by Robert Sullivan, the man responsible for both signs. 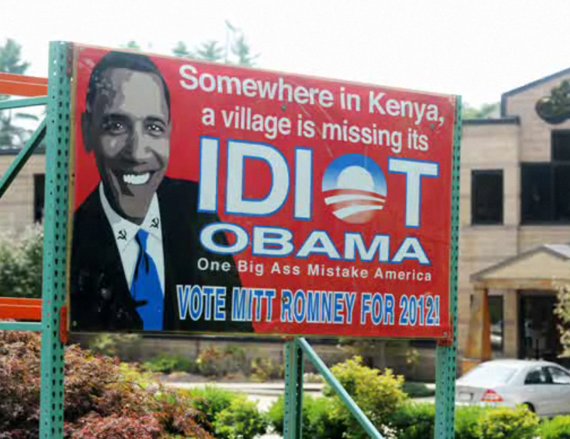 While the retread of a commonly used birther slogan has upset some and amused others, according to the Enterprise, the larger problem with it, as well as the other billboard, appears to be that Sullivan never got the permits necessary to install them.

Curran has since informed Sullivan of the infraction, and though an attorney for the businessman has claimed that the matter has already been resolved with a different town official, no appeal has yet been filed. The Enterprise reports that Sullivan has until early next month to file the proper paperwork, or risk being taken to court over the placement of the signs.

The debate over the billboards is not just a matter of their coarsely worded political messages. Some in the town also claim the sign with the little girl flipping the bird is placed at a dangerous intersection, which has been made more so by passing motorists distracted by the sign.

These displays are just the latest in a series of anti-Obama billboards that have sparked controversy. Earlier this month, a protest was staged at the foot of an Indiana Tea Party billboard that sought to compare Obama to Osama bin Laden.

"The Navy SEALS removed one threat to America," the sign read. "The voters must remove the other."

Read more about the Hanson signs from the Enterprise here, and watch a video report on the issue here.