A cartoon is claiming men can thank Obamacare for getting sexually transmitted diseases from "women who now get free birth control."

The cartoon depicts an angry man next to a woman holding a pack of birth control pills, both with sores on their mouths. Under the words "thanks Obamacare!" are the hashtags #gotbrokencondom, #gotherpes, #gotpregnant and #gotchildsupport.

The cartoon was done by A.F. Branco, whose work is published at a website called Comically Incorrect.

The cartoon is a parody of an ad for Obamacare from DoYouGotInsurance.com called "Let's Get Physical," showing characters named "Susie" and "Nate" described as "hot to trot." In the ad, Susie gives a thumbs up while holding a pack of birth control pills.

See the cartoon below: 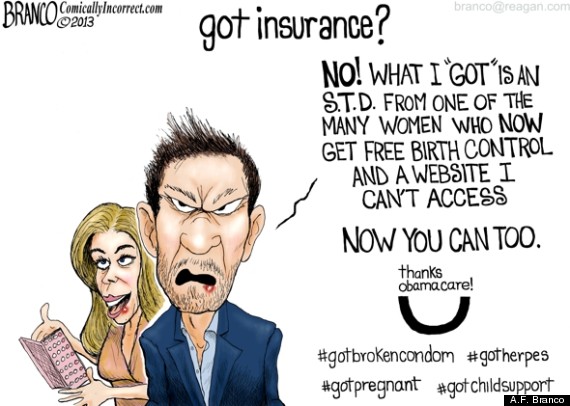 UPDATE -- 12:26 p.m.: Branco gave the following statement on the cartoon to HuffPost:

I'm not against birth control or nor do I feel that it is any of my business what people do sexually. However, I do feel that contraceptives are inexpensive and accessible enough that I shouldn't have to pay for them through my taxes. I also feel that my government shouldn't be promoting promiscuous sex as though condoms are the answer to all STDs and promiscuous behavior.

This post has been updated with a version of the cartoon sent to HuffPost by Branco.