Donald Trump says exactly what the GOP believes. It’s a simple axiom: personal wealth accumulation is everything. Republican Party officials believe individuals like The Donald attain riches through their own guts, glory and gumption with not an iota of aid from community, country or, frankly, inherited wealth.

It’s just that when The Donald expresses their credo, he ignores the shinola and emphasizes the crass. Instead of going with the slick 2012 GOP convention theme, “I built that,” to aggrandize individual capitalist conquest, The Donald slammed a group of his primary competitors for serving their nation instead of themselves.

What The Donald failed to acknowledge is that some of them, like Wisconsin Gov. Scott Walker, serve themselves through their so-called public service. This year, for example, Walker took a quarter billion dollars from Wisconsin higher education, gave it instead to a project by billionaire sports team owners to construct a new arena for the Milwaukee Bucks, and now one of those rich guys, Jon Hammes, co-chairs Walker’s national campaign fund raising.

It’s a brilliant scam. The Donald, master of bankruptcies with four under his belt, really should be impressed. Walker is forcing the great majority of Wisconsin workers to pay taxes, not for projects they prize like schools or highways, but instead to further enrich millionaires who, in turn, fill Walker’s campaign pockets! 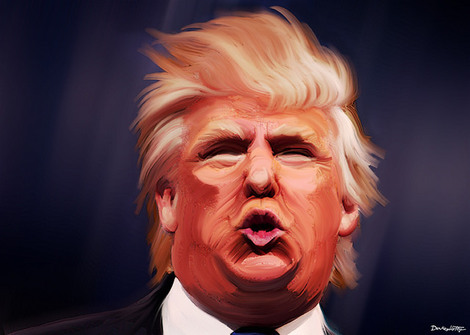 The Donald elevates capitalist endeavors, even those achieved through bankruptcy, over public service, suggesting non-millionaires are unqualified for office: “A number of my competitors for the Republican nomination have no business running for president. . . . Many are failed politicians or people who would be unable to succeed in the private sector.”

This echoes the derisive comments the previous Republican nominee for President, the quarter billionaire Mitt Romney, made about American people generally. He slammed nearly half of them, 47 percent, as slackers who receive government aid after they failed to be born to a famous rich man, as Romney was, and then leverage that silver spoon to make millions for themselves. Never mind that many of the 47 percent receive Social Security that they earned through a lifetime of hard work. Never mind that guys like Jon Hammes fatten their already bulging wallets with government handouts.

A specific “failed politician” that The Donald blasted was U.S. Sen. John McCain. The Arizona Republican, who suffers to this day from injuries he endured as a prisoner of war, didn’t defeat Barack Obama for the presidency. So The Donald called McCain a loser, a person who The Donald would fire, in fact, according to The Donald, not even a war hero.

The Donald explained that he preferred guys who didn’t get captured, guys like himself who evaded military service with a bone spur he claims he had on he forgets which foot, guys who pursued their self interest at the same time soldiers like McCain risked their lives for their country.

While The Donald cruised around Manhattan in his daddy’s limo, caroused at private clubs and collected his first million working for his daddy’s firm, McCain volunteered for military service, suffered three shattered limbs when his jet was shot down, endured torture in a Viet Cong prisoner of war camp for five years and refused to jump ahead of other prisoners for release, an offer the enemy made based on McCain’s familial connection to military brass. McCain joined up to make his father and grandfather, both four-star admirals, proud, not to exploit them to benefit himself in the way that The Donald used his daddy.

My union, the United Steelworkers, supported Barack Obama for President and agrees with John McCain on virtually no policy issue. Ever. It is, however, without question that McCain responded honorably to the call of duty for his country and sacrificed incalculably for that.

Despite McCain’s achievements as a soldier and a senator, The Donald felt entitled to belittle him as “incapable of doing anything” because he didn’t make millions by demanding rent money from impoverished tenants, as The Donald launched his career doing.

Money is everything for politicians like Trump and Romney and GOP candidate Carly Fiorina, who laid off 30,000 workers when she ran Hewlett-Packard then stuffed a $40 million golden parachute in her purse before leaving the ailing firm. For them, individual schemes to accrue cash are paramount. And the amount of dough collected is the true measure of a man. Or woman.

It may come as a surprise, then, to these self-aggrandizing capitalists that most Americans don’t believe human greatness is the sum of private jets and mega yachts bought with profits made on the backs of furloughed workers. And particularly relevant to politicians who evangelize careless Randian capitalism in the Bible belt is a recent poll that found the values of the faithful to be the antithesis of money worship.

Lake Research Partners released a survey last week of likely 2016 voters who are religious or faith affiliated. It found that devout voters reject the Republican concept that individuals build businesses by themselves and that every citizen must struggle alone in society competing for survival against neighbors and work mates. They rebuffed a culture based on the Donald Trump reality show The Apprentice – where contestants stomp each other to get ahead.

Instead, these religious voters believe in community where members sustain and strengthen each other.  They expressed strong support for policies that inure to the collective good including paid sick leave, increasing the minimum wage to $15 an hour and investment in children even if that means raising taxes.

This, frankly, is not a surprising finding in a religious country that is a closely bound collection of states. Citizens of the United States have found that they can achieve far more through affiliation and cooperation. No individual state, not even the big ones like Texas or California or New York, could have won World War II. But 50 states together, with young people volunteering for military service and women stepping up to work in factories and old people buying war bonds, generated the synergistic power of community essential for victory.

Republicans who denigrate those values do so at their own peril. Americans aren’t selfish. They don’t live by The Apprentice theme song, “For the Love of Money.” Americans are better than that. And they deserve better than mean-spirited, self-serving politicians.