"Antimicrobial resistance is one of our most serious health threats."

So begins a comprehensive report released by the Centers For Disease Control and Prevention this week, "Antibiotic Resistance Threats In The United States, 2013." The report highlights the growing pandemic of superbugs that have out-evolved even our best antibiotics.

Antibiotic use in the meat and poultry industry has skyrocketed over the past decade. Nearly 30 million pounds were sold for livestock use in the U.S. in 2011, almost four times the amount used by humans. That means 73 percent of all antibiotics sold in America go to meat production.

Widespread use of antibiotics can lead to the emergence of drug-resistant superbugs in the meat supply, which are already shockingly prevalent. These hardy bugs are then passed on to the consumer, and the CDC's conservative estimates say more than 2 million people get sick due to resistant bacteria every year, and more than 23,000 people die.

Take a look at this chart to see the supply chain of bacteria transmission: 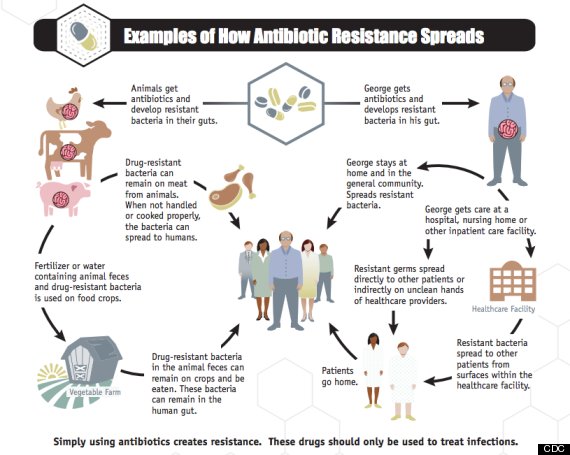 "Antibiotics must be used judiciously in humans and animals because both uses contribute to not only the emergence, but also the persistence and spread of antibiotic-resistant bacteria," the report says. "Antibiotics should be used in food-producing animals only under veterinary oversight and only to manage and treat infectious diseases, not to promote growth."

The Food and Drug Administration's recommended guidelines strike a similar chord to the CDC, promoting a "judicious use" of antibiotics when the health of an animal is at risk. But livestock owners aren't subject to any oversight from the federal government and the guidelines are voluntary -- meat producers can use any antibiotics, in any combination, in any quantity without telling anyone.

The Countries that Eat the Most and the Least Meat