In 1977, Jimmy Carter was president. Elvis Presley was still in the building. And the U.S. Food and Drug Administration was rolling up its sleeves to start addressing the problem of antibiotic overuse on industrial farms. 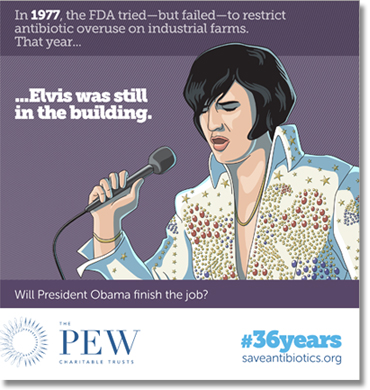 Thirty-six years later, President Barack Obama is settling into his second term. Elvis impersonators are going gray and retiring. And the FDA still has not adequately addressed the public health threat posed by antibiotic overuse. We cannot wait any longer.

In the 1950s, meat and poultry producers began feeding antibiotics to healthy animals largely to make them grow faster and to compensate for the increasingly overcrowded and unsanitary conditions on their farms. And even though Alexander Fleming, the scientist who earned a Nobel Prize in 1945 for discovering penicillin, warned that these practices would breed antibiotic-resistant bacteria, it wasn't until 1969 that a groundbreaking report provided the first scientific evidence that confirmed his theory. Acting on this report and additional studies conducted in the early and mid-1970s, the FDA took steps in 1977 to restrict the use of several important antibiotics in animal feed for production purposes (as opposed to medical reasons). Unfortunately, the agency's journey never extended beyond these first few strides.

Hundreds of studies have since piled up in peer-reviewed science journals, which justify FDA action. The agency -- along with the American Medical Association, the American Academy of Pediatrics, the World Health Organization, the Centers for Disease Control and Prevention, and the U.S. Department of Agriculture -- recognizes that using antibiotics in food animal production helps create antibiotic-resistant bacteria that infect people.

Basic microbiology tells us that bacteria develop resistance whenever they are exposed to antibiotics. And the Animal Health Institute, which represents veterinary-drug makers, recognizes that germs spread easily between species. In fact, it reports that, over the last three decades, 75 percent of new human diseases started out in animals. Furthermore, new DNA fingerprinting techniques document that certain strains of the dangerous superbug MRSA -- methicillin-resistant Staphylococcus aureus -- are spreading from livestock to people. Additional research and experience shows that when people contract these kinds of resistant infections, their hospital stays tend to be longer, their health care costs higher, and their chances of survival lower.

But resistance does not just harm people; it also threatens animals. Back in 2005, the FDA withdrew an antibiotic from use in poultry production because it quickly and quite noticeably bred drug-resistant bacteria that threatened human health. A coalition of animal veterinarians fought to keep using the new drug because the old ones, tetracyclines, "have been used for decades in the U.S. poultry industry, without prescription requirements, to the point where tetracycline resistance is the norm, not the exception." In other words, the widespread use of tetracyclines on healthy animals made it more difficult to treat the sick ones. If the FDA had followed through on its early efforts to restrict the overuse of antibiotics on livestock four decades ago, these drugs would most likely be more effective than they are today.

Last year, the FDA finally resumed its long-delayed effort to curb the non-therapeutic use of antibiotics in food animal production. While the agency did not continue its original strategy of mandating restrictions, it is pushing voluntary measures that instruct drug companies to stop marketing antibiotics for production purposes such as growth promotion. More than 14 months have passed, though, and the guidelines remain in draft form. We need them finalized now.

Running for re-election, President Obama told Scientific American in September 2012 that his "administration is taking steps to limit antibiotic use for livestock. This will help ensure that antibiotics are used only address diseases and health problems, and not for enhancing growth and other production purposes."