Since the discovery of penicillin in 1928 and its first use in the 1930s and 1940s, millions of lives have been saved from streptococcal and staphylococcal infections as well as syphilis and other deadly infections.

But in some senses, we have killed the goose that laid the golden egg. We have overused antibiotics to the point where many don't work anymore. For decades, humans have taken antibiotics when they aren't necessary for colds and viral infections, which are not bacterial and therefore not touched by antibiotics. For decades, livestock operators have given antibiotics to their animals to make them grow faster and keep infection from breaking out. The consumer products industry has added antibiotics to toothpaste, bath soap, dish and laundry detergents and even socks, workout clothes and toys for no reason other than the perceived value by shoppers and the ability to charge a higher price.

Antibiotic overuse has created a monster -- actually several monsters including the supergerms MRSA, VRE, C. difficile and CRE, which are increasingly hard to destroy. Drug industry leaders are the first to admit that antibiotics are not lucrative to manufacture because they are taken for such a short time (except for farm use). In his book Devalued and Distrusted, John LaMattina, former president of Pfizer's Research and Development, says, "commercial return on a new antibiotic would pale in comparison to a new treatment in areas like cancer or Alzheimer's disease." Some antibiotics now cost hundreds or even thousands of dollars for one prescription, like the uber-expensive Vancomycin.

As new antibiotics become rare and more expensive, their safety profiles also seem to degenerate. The new antibiotics Trovan, Ketek and Raxar were all withdrawn or severely restricted for causing liver damage or failure. The popular antibiotics Cipro, Levaquin,and Z-pack, (azithromycin) are increasingly linked to heart, muscle and tendon problems and have received new FDA warnings. 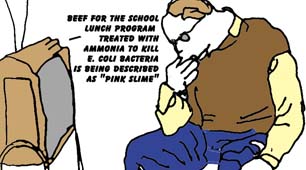 There is also new respect for what antibiotics can do in the environment. Endrocrine-disrupting antibiotics like Triclosan, put in common household soaps and toothpastes, are linked to feminized frogs and fish in streams and water bodies and to precious puberty in humans. Antibiotics themselves are found in water bodies and tap water thanks to land and aqua farming overwhelming sewage systems. They are in grocery store meat tested by news organizations and consumer groups and even in vegetables because they can siphon right up from manure. So much for vegetarians being safe.

There is also new respect for what antibiotics can do in the human body. Increasingly, scientists are regarding the hundreds of microbes in a person's body as their personal "microbiome," similar to their genome, and realizing that antibiotics have effects far beyond targeting a bacterium and temporary changes in the intestines. They are investigating the role of antibiotics in chronic diseases like obesity, GERD, asthma, allergies and inflammatory bowel disease.

While medical providers are beginning to use antibiotics more sparingly, consumers need to reject antibiotic-laced products whether for food or personal care. Government regulators need to stand up to antibiotic-based livestock operations with real bans, not voluntary guidelines as recently passed in the U.S. Drug company priorities should never come before doctors'.

In a few decades, antibiotics have gone from wonder drugs to wonder-if-they'll-work drugs. And thanks to new awareness of their human and environment effects, they're also becoming wonder-what-else-they-are-doing drugs.

Martha Rosenberg is a health reporter whose food and drug expose, Born with a Junk Food Deficiency (Prometheus Books, 2012), was named in the American Society of Journalists and Authors 2013 Outstanding Book Awards. A former medical copywriter and medical school lecturer, Rosenberg has appeared on CSPAN, National Public Radio, the Ed Schultz show and RTV. "Born" has been praised by the Public Library of Science and cited by the Sloan-Kettering library. Rosenberg spoke at the Mid-Manhattan Public Library in June.