Last year, 17 percent of Americans were given antibiotics. We take for granted that they will work. We forget that before antibiotics were first developed, in the 1940s, even routine infections could be scary, and potentially life-threatening.

Will that soon be the case again? In early May, a landmark World Health Organization (WHO) report warned of a "post-antibiotic" era, where even simple UTIs or skin infections could leave us facing our own mortality. Alarmed about the catastrophe's imminence, Healthy Food Action joined other civil society groups in forming the global Antibiotic Resistance Coalition, which on May 21 issued a declaration calling for more urgent and radical change to how we use, regulated, market -- even think about -- antibiotics. The declaration underscored the failure of national governments, as well as the WHO, to act quickly enough or decisively enough to avert the coming disaster.

The general public, let alone most physicians, don't fully grock the gravity of that threat. Resistance is a hard-to-grasp concept. Even harder, especially in a short clinic visit, is convincing a patient it's better to avoid antibiotics altogether, unless one really needs them. That's due both to the disruption to healthy microbes in the gut, combined with the small contribution that each needless use of antibiotics makes to the global resistance problem. In short, exposing bacteria around us to antibiotics is what provides the "selection pressure" that drives them to become resistant in the first place. 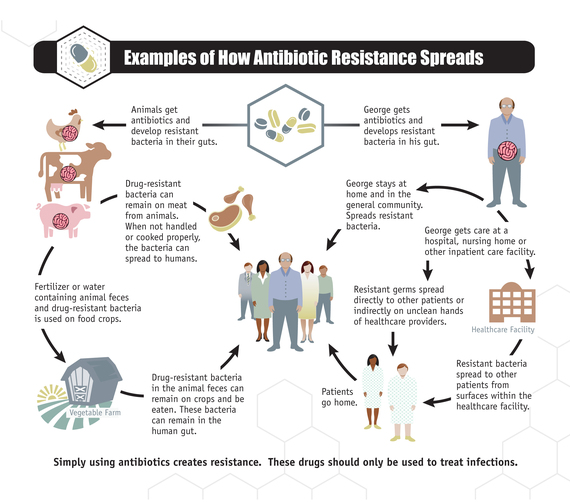 Best estimates are that up to half of the 7 million pounds of antibiotics taken by humans and perhaps 70 percent of the nearly 30 million pounds given to livestock each year in the U.S. are unnecessary.

We live in a visual world today. More than a decade ago, millions were first introduced to the problems of overusing antibiotics in factory farms by the Meatrix, a flash animation video that went viral. Recently, Monica Gomez's new infographic, The Good, the Bad and the Ugly about Antibiotics, helps address that need. Take a look. Send it around. Share it with your nurse or doctor. 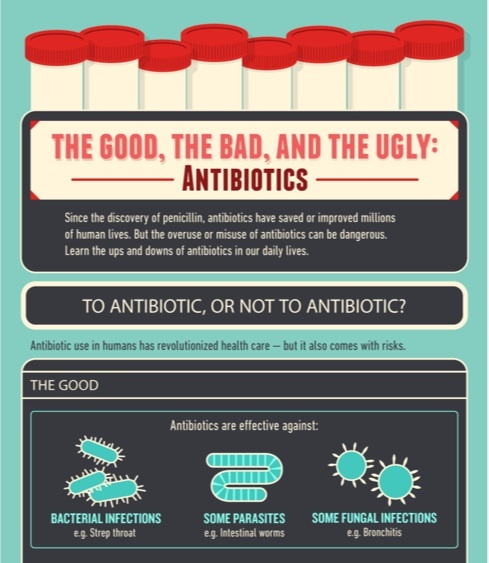 Unfortunately, the battle for a future where kids won't be at risk for dying from a simple ear or skin infection will play out over decades. Really, it's those kids who need to be engaged, to better understand why the best practice often is not using any antibiotics at all.

Kids aren't the toughest audience to convince, of course. That would be pharmaceutical companies whose marketing still reflects their goal of selling as many antibiotics as possible, regardless of the public health toll.

David Wallinga, M.D. is founder and Director of Healthy Food Action, a national network of nurses, doctors and other health professionals working towards a food system that's healthy and sustainable.

More:
healthy livingWHOantibiotic resistanceantibiotics
Newsletter Sign Up
The essential guide to taking care of your mind and body
Subscribe to HuffPost’s wellness email
Successfully Subscribed!
Wellness delivered to your inbox