Speaking at "Carver Day" last Saturday on the tranquil, pastoral grounds of George Washington Carver National Monument in Diamond, MO, I told the audience that I'm very much looking forward to the day when a unit is added to the National Park System commemorating the success of the 'Black Lives Matter' movement. 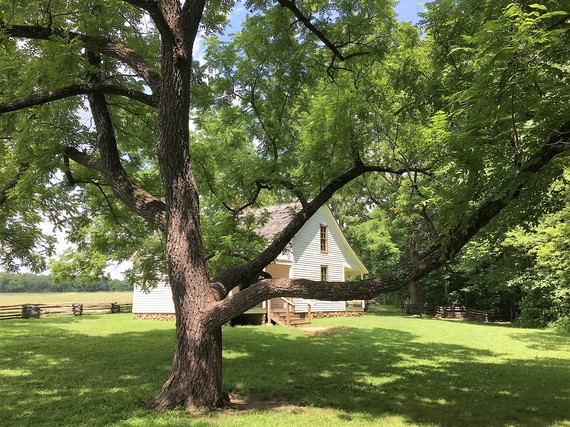 I could feel George Washington Carver's essence in the forest and in the clearing where this home was built by Moses Carver in 1881 that GWC visited. When I touched this tree I imagined that I was connecting with him through space and time.

Never having been perfect, our country has come through many tumultuous times on the way toward "liberty and justice for all." The places and events that have had the most pivotal effect in our evolution are protected in our National Park System to show us from whence we have come, and what we must do to continue to honor our debt to our ancestors and our responsibility to our descendants.

It is no more optimistic to envision a 'Black Lives Matter' National Monument in our future than it would have been to imagine the Selma to Montgomery National Historic Trail on "Bloody Sunday" 1965. That day when the hounds of hell were loosed upon Dr. Martin Luther King and the peaceful marchers for voting rights, when young John Lewis (today's longtime Congressman) was beaten within an inch of his life and many others were critically wounded by law enforcement, who would have thought that it would become enshrined in the National Park System as one of the most pivotal events in our history? 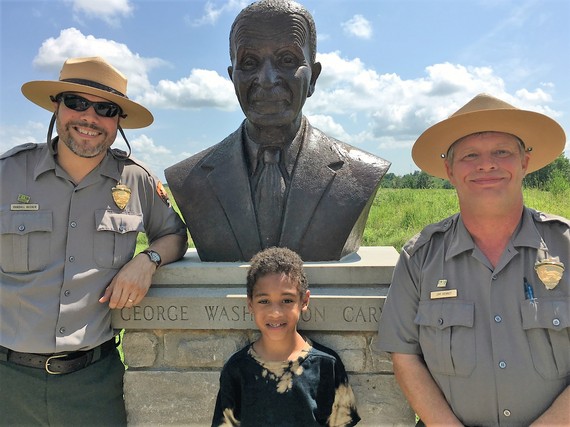 Ranger Randall Becker (l) and Superintendent James Heaney epitomize the high caliber employees of the National Park Service and pose for a picture in front of the GW Carver bust with our new friend Josiah.

Yet indeed the horror that a majority of white Americans and President Lyndon Johnson felt at seeing the pictures coming out of the event roused the President to declare to Congress:

"The cause of the marchers must be our cause too..." and "really it is all of us who must overcome the crippling legacy of bigotry and injustice. And we shall overcome."

The Voting Rights Act followed shortly thereafter with the park being established in 1996 to protect that historical legacy.

Similarly Alcatraz Island commemorates the Indians of All Tribes Occupation, (1964, 1969-71) and the newly-minted Stonewall Inn National Monument marks the place where members of the LGBT community rose up in 1969 to force recognition of their unequal treatment at the hands of the law.

When we arrive at a Black Lives Matter National Monument, it will signal that Americans held together and came through this very challenging time with a greater understanding of our oneness as a nation of diverse heritage, ethnicities, religious backgrounds and sexual orientation. We would have come to appreciate the strength in our diversity.

There could be no more glorious or appropriate place to hone and share this vision than the George Washington Carver National Monument. The park protects the birthplace of the so-called 'Peanut Man' and the 'secret garden' of the enslaved, orphan youth who would come to save American agriculture, change history and the world. 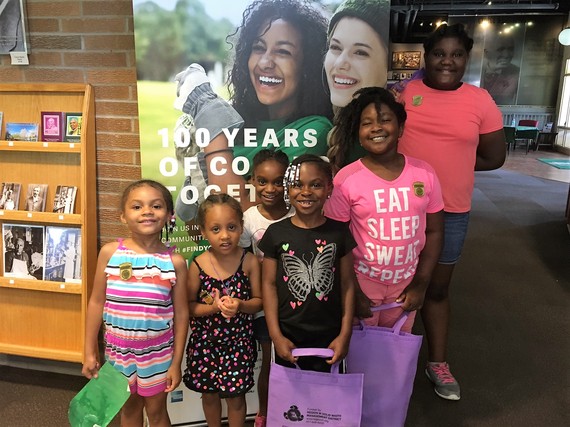 These young Junior Rangers are all smiles having just earned the badges that they're proudly wearing. Pastor Harold Wallace brought them and other members of Jackson Memorial Baptist Church in Kansas City to Carver Day in the park.

"I love to think of nature as an unlimited broadcasting station through which God speaks to us every hour, if we will only tune in," GW Carver famously observed. He said the plants spoke to him and communicated their secrets.

The green countryside approaching the park remains undeveloped for miles. I could picture the young orphan boy with the high falsetto voice roaming through the woods, talking with the plants and animals. From nursing ferns back health in his secret garden he would grow up to rescue America's failing agricultural industry, create more than 300 healing, nutritious and industrial products; testify before Congress (though a congressman from the south asked insultingly whether he'd brought watermelon to go with the peanuts, GWC's presentation impressed the committee so that they increased his time); train and inspire countless other scientists; become celebrated by an American president; earn membership in the Royal Society of Arts in England among only a handful of other Americans to have that honor, and have a national park created in his honor.

GW Carver's exploits are so much the stuff of legend that no one treatment could ever adequately describe him. But clues can be drawn from the fact that the legislation establishing the Monument was passed unanimously by Congress shortly after his death in 1943, one chamber governed by Democrats and the other by Republicans.

It "was the first National Park established to memorialize the life and scientific contributions of a man in agricultural science, the first to an African American, the first to a man other than a president, and the first in world history to interracial understanding and peace."

It also had strong international racial overtones. After America declared war in 1941 Richard Pilant, a distant relative of the Carver family who'd been working to get the monument established positioned it thus: "It became of necessity a war measure designed to show (the enemy) that America is a land of opportunity for all races." 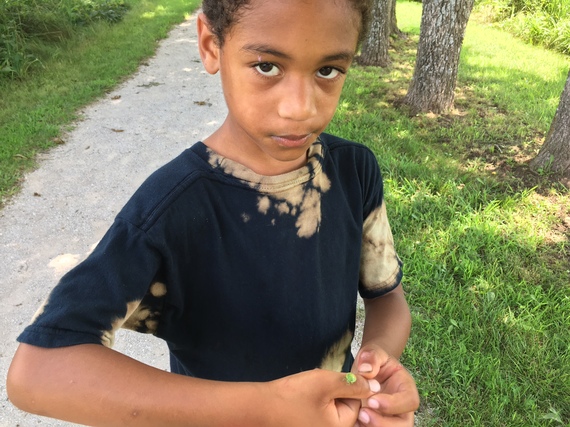 As my new friend Josiah and I strolled through the meadows where George Washington Carver walked he showed me the jeweled bug that had befriended him and when I invited him to race down the path he said yes and "I'll take it easy on you."

In the sanctuary of demonstrated peace and boundless universal love for humanity, I entreated the audience to let the streaming videos of recent police interactions with African Americans serve as our version of pictures from "Bloody Sunday" or the gory photographs of young Emmett Till's mutilated body in 1955 so shocked America's conscience that it helped spur the Civil Rights Movement. Let us recognize and address the problems inherent in our system as we mourn the wanton killing of our fellow citizens by police officers and deranged individuals. Let us honor the sacrifice and investment of our ancestors that suffered through so much to give us the country we have today, for the sake of all those proud new Junior Rangers who earned their badges at the Monument Saturday and all those who will come after us.

Here's to the day when "Black Lives Matter" is an unnecessary affirmation as that ethic is cemented in the creation of a national park commemorating the legacy of this time.