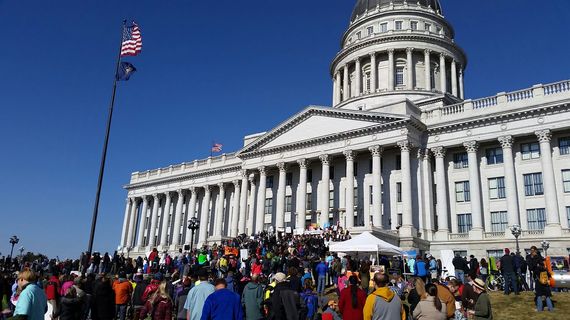 My wife and I had to leave early and as we were walking off of the grounds of the State Capitol, we heard several cars and trucks revving their engines. A line of cars and trucks with a combination of Idaho and Utah plates were evidently trying to circle the Capital so they could idle and rev their engines in some sort of counter protest to the thousands gathered on the lawn.

At the lead of the line of cars and trucks was a big green pick-up truck whose driver had left his vehicle on and was standing outside of his truck. Quickly, a police officer had the individual get back in his car and instructed the idlers to get moving.

As we passed through the line of cars and trucks a few other drivers and passengers were getting back into their cars. "I guess we're not allowed to protest the protest," said one. While another exclaimed, "I figured more of them f*ckers would have been playing hacky sack*."

That's right folks; there is evidently a group of people in Utah who organized a counter-protest against clean air. It was a far smaller group than those gathered to demand the government of Utah do something to promote clean air and minimize pollution. But it was a sizable enough group that created if nothing else, a traffic flow problem. The group had set out that day to intentionally pollute the air. What strange tipping point have we crossed in our society where people set out against clean air?

Clean air should not be a political issue; nor should clean water for that matter. We all need both; even the people who led the counter protest need to breathe. Whatever else we do not agree on in this country, we should at least be able to agree that everyone deserves the right to breathe without impediment.

*I did not see anyone playing hacky sack.