America was once a world leader in democracy, with innovations like the Declaration of Independence and the Constitution with its Bill of Rights. While the early republic had major flaws, our nation was nonetheless an innovator in democracy at a time when monarchies ruled. Since that time, many nations have adopted the American principles of separation of powers in government but they have avoided many of the idiosyncrasies in the American system. Most modern democracies avoid our single-seat winner take-all-elections, using some form of proportional representation instead. No modern democracy has adopted the American system that denies citizens in their national capital the right to have a voting representative in Congress. For the purposes of this article, I will focus on the fact that no other country uses our anti-democratic Electoral College.

Often when I discuss the Electoral College with Americans who don't spend much time thinking about politics, they suggest, "it's been working for hundreds of years, so whatever problems it has are probably not so bad." This reflects a basic pattern in American society where we want the latest technology for our computers, televisions and cell phones but we complacently trudge along using archaic voting technology while ignoring the improvements that have occurred since the late 1700s. Defenders of the status quo start to perk up when I mention that the Electoral College makes it possible to capture the presidency by winning only eleven states and disregarding the rest of the country or that four times the presidential candidate that won the popular vote lost the election. When I remind them that no country uses the Electoral College model for electing a leader, they start wondering what aspects of the Electoral College are most problematic.

That is when I emphasize that, by design, the Electoral College fundamentally undermines the basic principle of one citizen-one vote mentioning democratic lowlights such as:

(1) States with smaller populations have far more representatives per population than states with larger populations. For example, residents of the three least-populated states -- Wyoming, Vermont, and North Dakota -- have one congressional representative for every 200,000 people, while those in the three states with the highest population -- California, Texas, and New York -- have only one congressional member for every 670,000 people. This representational inequality clearly gives citizens from small population states a much stronger voice per citizen than those residing in large states when it comes to electing the president (see graph). 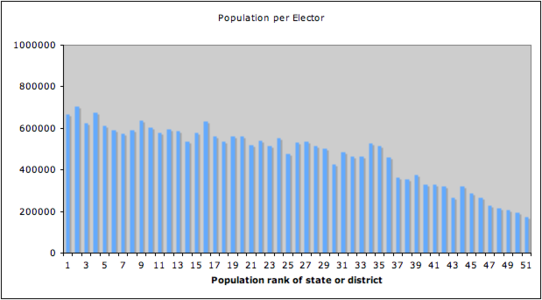 (2) Forty-eight states allocate all of their Electors to one candidate (Maine and Nebraska use proportional representation). This state-level decision of how to allocate Electors produces the issue of swing-state distortion, where citizens in states that are relatively evenly split between the two parties have far more influence in selecting the president than citizens in states where a majority are clearly voting for one party. Moreover, citizens are often discouraged to vote in presidential elections if they know that the allocation of all of their state's electors is a foregone conclusion. Campaign activity exemplifies the implications of this all-or-nothing allocation issue and its egregious undermining of the principle of one citizen-one vote. Candidates rarely invest campaign funds in states that aren't "in play" -- i.e., states whose electoral votes are considered to be already won or lost based on large margins of victory in previous elections and on current polling. For example, in the 2008 presidential election, the campaign of then-candidate Barack Obama spent nearly $40 million on advertising in Pennsylvania, a swing state with twenty-one electoral votes, and about $25,000 in Illinois, with an equivalent number of electors. The Obama strategists knew that there was no reason to spend any time courting voters in his home state, Illinois, since he would clearly win the majority of Illinois's popular votes and all twenty-one of its electoral votes. Republican and third-party supporters in Illinois had no chance of having their voices heard and citizens living in Illinois were being told very clearly that they are much less important than those living in Pennsylvania.

(3) "Faithless" Electors: After all of the undermining of one citizen-one vote that we described above, there is still the issue that the Elector doesn't actually have to vote for whom they pledged. For example, in 2000, D.C. elector Barbara Lett-Simmons abstained rather than vote for Al Gore as she had pledged. Her feeble protest resulted in silencing the voices of thousands of D.C. residents.

Few Americans would contend today that if we were designing a system to elect a president from scratch, the Electoral College would be the optimal solution. Using the popular vote would be the most obvious choice and a majority of Americans support this change. it would be easy to implement since the popular vote is already counted and some variant of preferential voting could be introduced so that third-parties can have a stronger voice.

Yet, inertia is a powerful force and so I don't anticipate America discarding this system anytime soon. Until the time comes when America drops the Electoral College or there is sufficient support for the National Popular Vote Interstate Compact, all states should mirror the practice of Maine and Nebraska of allocating their electoral votes based on proportional representation. This corrects the current all-or-nothing system used in forty-eight of the fifty states and its resulting overweighting or underweighting of votes based on whether or not you live in a swing state. More importantly, it will force candidates to take the votes of every American seriously, not just that small percentage living in swing states. Unfortunately, self-interest often trumps what is most fair or appropriate. Consequently, it is unlikely that many other states will follow Maine and Nebraska's lead since proportional allocation diminishes the power of the majority party in the state and opens the opportunity for third parties to have a stronger voice (an action that leadership in both the Democratic and Republican parties wouldn't want).