It has been 15 years since the U.S. Food and Drug Administration allowed drug companies to advertise prescription-only medications directly to consumers. Its decision made the United States the only developed country besides New Zealand that permits such advertising.

Many Americans who are thirtyish and older can remember when ads for prescription medicines first began to appear, exhorting us cheerfully to "ask your doctor" about products as deeply personal as antidepressants and erectile dysfunction treatments.

But Madison Avenue has been placing its special touch on prescription drugs for much longer. Pharmaceutical companies have always been allowed to promote their products to doctors by running advertisements in professional journals, and they've done so for decades. Direct-to-consumer ads are a new genre, but they've had a lot to build on.

What follows is a collection of twenty ads for antidepressants and anti-anxiety drugs, spanning the late 1960s to the current year. Many ran in medical journals like JAMA and the American Journal of Psychiatry, encouraging doctors to prescribe brand-name drugs to their patients. Others, aimed directly at the consumer, ran in major publications like Time. Many of them I discovered in the course of researching my book on youth and antidepressants, Coming of Age on Zoloft.

The ads are campy, funny, disturbing, and sometimes downright weird. They show how much has changed in four decades, especially the rise of a marketing pitch that blames depression on a chemical imbalance, not a character flaw. And they document the birth of a rhetoric of personal fulfillment, where using the product is presented as a way of becoming one's real, true self.

But they also show how much has stayed the same. From the beginning of the sample to the end, the ads focus on courtship and family values. The tactics are unchanging: throughout, the advertisers exploit the viewers' insecurities, whether a doctor's fear of letting down a patient, or an individual's fear of failing at life. Every anxiety becomes a mental disorder for which the product is the solution.

Most of all, the ads are full of women, a fact as true today as it was in 1967. Advertising must be at least partly responsible for the fact that over twice as many women as men use antidepressants. The following ads show women who need medication because they fail to thrive in female roles (lover, wife, mother), or because they are oppressed by the demands of those roles (the trapped housewife, the harried working parent). Here they are, a rogue's gallery little changed by 45 years of progress--the singletons, the wallflowers, the ineffective moms.

PHOTO GALLERY
A Brief History Of Psychotropic Advertising
Download
Calling all HuffPost superfans!
Sign up for membership to become a founding member and help shape HuffPost's next chapter
Join HuffPost

Bad Mothers and Single Women: A Look Back at Antidepressant Advertisements (PHOTOS)
A Brief History Of Psychotropic Advertising 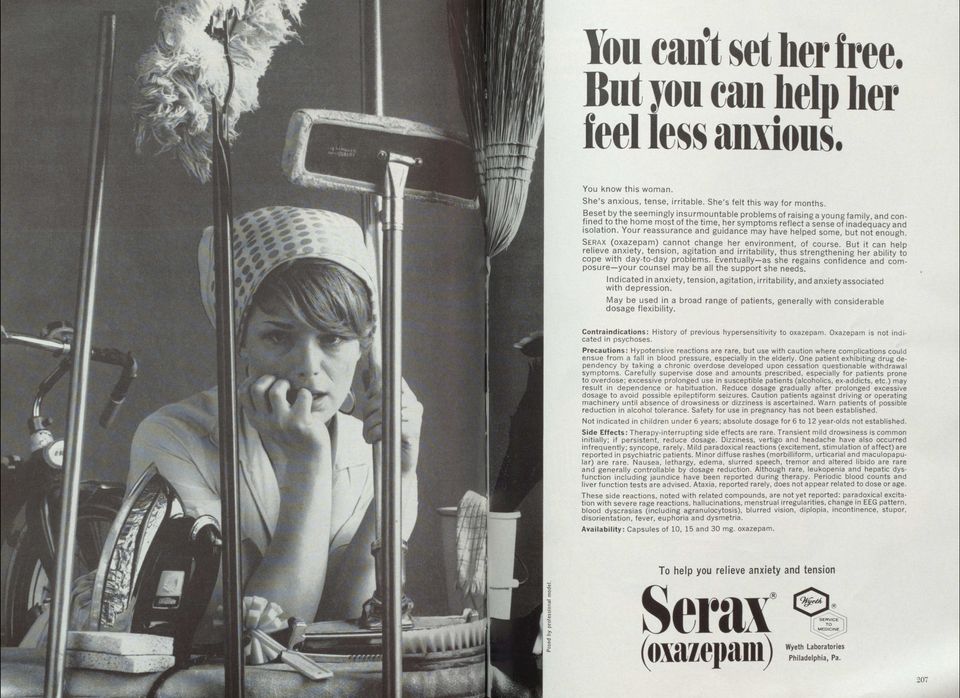 1 / 20
You can't set her free
Though antidepressants have been available since the 1950s, they didn't become popular until after Prozac's debut in 1987. In the 1960s and '70s, millions who would be treated with an antidepressant today took anti-anxiety drugs, or tranquilizers. Eventually these drugs' association with stay-at-home wives earned them the nickname "mother's little helpers." In this ad for doctors, a young housewife trapped behind a palisade of brooms and mops clutches at her face with a worried expression. The text reads: "You know this woman. Beset by the seemingly insurmountable problems of raising a young family, and confined to the home most of the time, her symptoms reflect a sense of inadequacy and isolation. Serax cannot change her environment, of course. But it can help relieve anxiety, tension, agitation and irritability, thus strengthening her ability to cope with day-to-day problems. Eventually--as she regains confidence and composure--your counsel may be all the support she needs." Source: JAMA, Volume 200, Issue 8 (1967), page 206.