Teaching theatre to middle school kids should be any teacher's dream. Students that age are naturally dramatic and excited to perform. They just need to be given permission to explore and to be themselves.

In 2008, while teaching theater at Normandy Middle School in St. Louis, I encountered a 7th grader by the name of Michael Orlandus Darrion Brown. Over several years of teaching, I developed a gift for taking students who were struggling in the areas of discipline and engagement and transforming them into vibrant positive citizens, through theatre and dance.

Michael Brown wasn't struggling in the discipline department, but he was extremely reserved, shielded and at times a bit shy. After a couple of months in my class, Michael, who was physically much larger than many of his classmates, was up clumsily executing the choreography to Sing Sing Sing, while laughing and sweating with all the other students. He was also my Bobo in Raisin in the Sun, Michael had life! He truly had a spark! And I felt privileged to watch him come alive in my class.

A year later, I transferred to Normandy High School to become the choir teacher. Looking back, I feel deep regret because my 7th graders, especially my boys, were now 8th graders and I am not sure if leaving them at such a critical moment in their development was the best decision. I had a responsibility to those students, including Michael, one that I still feel strongly today.

When Michael Brown died, one of my former students, RaQuan Smith, who had just graduated from Normandy High School, was preparing to start his freshman year at the University of Missouri, St. Louis, reached out to me. I picked him up from his home in Welston, and we drove to Target on W. Florissant to purchase some candles for the vigil at 5pm on Aug. 10, 2014. RaQuan had been close to Michael and was having a hard time processing what had just happened. His friend and fellow classmate had been shot and killed in the street by the police, and his death had sent the community reeling with grief and disbelief.

The peaceful vigil that we attended took place near the spot where Michael Brown laid on the hot pavement for over four hours. The passion and beauty of the vigil was overwhelming. The community came together to sing songs, recite poetry and make pledges to protect our youth. As we all raised our voices in song, I could only see images of Michael, that shy and reserved 7th grader, doing the Charleston to Sing Sing Singin my class. It was an image that has stayed with me to this day.

At the time, the world and the media were overwhelmingly focused on the shooting itself. Our focus that night was on an 18-year-old boy lying dead on the hot pavement in front of children, grieving parents and friends with a sheet barely covering his enormous corpse, for over 4 hours. And over those 4 long hours, theories and rumors developed. Cell phone pics of a dead Black boy in St. Louis were in heavy rotation on social media, and the world was slowly being introduced to FERGUSON. That's when Ferguson became Ferguson--one block of one street on which one body lay became the epic center of the Ferguson Moment.

It was that visual of Michael Brown lying on the pavement that fueled the anger that ignited after the vigil. The passion and beauty of the moment would soon be replaced by rage and rioting. RaQuan and I left the area just as the riot police were speeding down West Florissant to the unrest. We made it to the other side of town to a pizzeria, and it was there that we watched the burning buildings and the chaos on TV.

No one has been able to sufficiently explain what led to the shooting on Saturday August 9, 2014....But what we do know is this. For 4 long hours, those who were hired to protect and serve the people of our community blatantly disrespected a dead human being and those of us who knew him, because they could. The Law allowed for an 18-year-old boy to lie above ground in the 90-degree heat for 4 hours because THEY WERE TRYING TO FIGURE OUT WHAT TO DO, not because it was an active crime scene, as we were later told. For the first time the cops could not shield the truth from the eyes of those they feared. In broad daylight...The Law of the Land decreed that Michael Brown's body was worthless and insignificant and therefore did not deserve the RESPECT to be moved.

A little over two years after Michael death, a group of local singers and well-known actors --including Samira Wiley (Orange is the New Black) and Reg E. Cathey (House of Cards) -- gathered to perform Sophocles' Antigone at Normandy High School, and to raise our voices in song yet again. This time, we came together to help heal the community and, in the words of chorus of Sophocles' Antigone, to "purify the city." 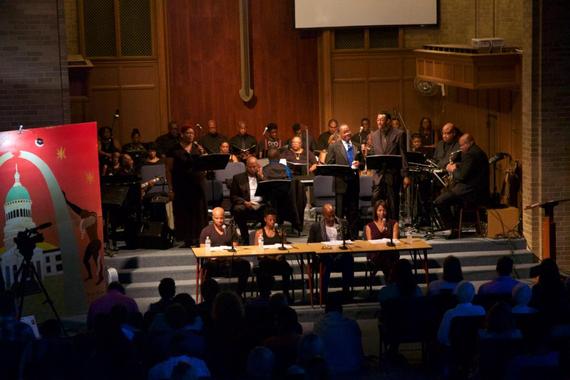 In Sophocles' ancient tragedy, in the wake of a brutal civil war, a body is left in the streets of Thebes by King Creon in order to punish and deter all those who dare to oppose the Law. However, Antigone, the teenage girl whose brother's body remains unburied, answers to a higher law--the sacred law of love and civility. She sacrifices her own life in service of her brother's body. Antigone becomes a martyr. More lives are lost, and violence descends upon Thebes once again.

In Ferguson, as in Thebes, the Law prevailed over morality and civility. The rioting and violence were in response to the violation of what is sacred and right. Much like Antigone, many of us did not care if state laws were broken or defied.

Ferguson was not about a shooting...it was about disrespect!

Note: Antigone in Ferguson premiered at Normandy High School on September 17, 2016. On Saturday, October 15, Antigone in Ferguson will be presented at the Onassis Cultural Center in New York City, as part of the Onassis Festival 2016 Antigone Now and then will tour to other communities in need of humanizing dialogue and healing throughout the United States.