Co-authored with Lance J. Sussman, Ph. D., Senior Rabbi at Reform Congregation Keneseth Israel and member of the Executive Board of the American Jewish Archives.

In January 1916 - one hundred years ago this month - President Woodrow Wilson nominated Louis D. Brandeis to the Supreme Court. Known as "the People's Lawyer," Brandeis became America's first Jewish Justice. His confirmation took four months, the longest in history. Antisemitism swirled around the process. But in the end the Brandeis nomination was a historical turning point, definitively undermining antisemitism in American political culture, even though that toxic animus still lingers in some quarters of American society.

The nomination came at a high point of antisemitism in the United States. A year before Brandeis's nomination the Supreme Court refused, by a 7-2 vote, to overturn the murder conviction of Leo Frank, a Jewish businessman, whose trial had taken place in a circus-like atmosphere of Ku Klux Klan inspired anti-Semitic hysteria. The unfairness of the trial, as well as Frank's innocence, was obvious to everyone but the authorities in Georgia and a majority of the U.S. Supreme Court. Shortly after the Court rejected his appeal, a mob pulled Frank from a jail and lynched him. Georgia authorities never charged anyone with this murder.

During this period the popular media often portrayed Jews with ugly language and racist cartoons. Private clubs regularly refused to admit Jews, some elite colleges placed quotas on Jewish enrollment, and cultural antisemitism was acceptable among American elites. This elite bigotry dovetailed with the Populist Party's anti-Semitic rhetoric, William Jennings Bryan's three Bible-thumping fundamentalist presidential campaigns which were tinged with loathing of Jews and Catholics, and a resurgent Klan which hated Jews and Catholics as well as blacks.

In this atmosphere, President Wilson nominated Brandeis, a brilliant Harvard trained lawyer and a self-made millionaire, who had spent much of his career fighting for workers' rights, fair utility rates, and honesty in government and business. The nation's most prominent public interest lawyer, Brandeis had successfully challenged oppressive and unfair policies of monopolies, public utilities, banks, railroads, and insurance companies. He had exposed dishonesty, corruption, and scandal in the Taft administration. The title of his book Other People's Money and How the Bankers Use It (1914) illustrates why Wall Street despised Brandeis. While the opposition to Brandeis was ideological and political, antisemitism was a major tool of those trying to derail his confirmation.

One Boston stockbroker urged the Senate to defeat the nomination because Brandeis was a "slimy fellow" tainted by "his smoothness and intrigue, together with his Jewish instinct." Some lawyers (many of whom had lost to Brandeis in court) asserted, again without evidence, that he was unethical while at the same time complaining he always played to win and did not go along to get along. Abbott Lawrence Lowell, the president of Harvard, was more refined in his bigotry. Using coded language, he claimed Brandeis was "unscrupulous," and lacked "judicial temperament and capacity," but when asked for evidence of this, Lowell admitted he had none. (Significantly, all but one of the faculty at Harvard Law School publicly endorsed his nomination).

Opponents argued he was money grubbing (wink, wink, Jewish) while also questioning his extensive pro bono practice. Typical of anti-Semitic thought, Brandeis's critics claimed he was simultaneously both greedy and a socialist. The Massachusetts Republican, Senator Henry Cabot Lodge complained that Wilson, hoping to carry the Jewish vote in New York, Massachusetts, and elsewhere, had only nominated Brandeis because he was Jewish, implying he was not qualified. Certainly, the growing power of Jewish voters may explain why some Republican senators from New York, Illinois, Pennsylvania, and Massachusetts did not vote on the confirmation. They did not want to vote for "The People's Lawyer," but they dared not vote against the Jewish nominee.

While his opponents claimed Brandeis's "Jewish" traits and characteristics made him unfit for the office, in the end their arguments fell short. The Senate ignored the massive faith based attacks on Brandeis, ultimately confirming him by a vote of more than two to one, mostly along party lines. Forty-four Democrats and three progressive Republicans voted for confirmation, and twenty-one Republicans and one Democrat voted no. Even in the face of Ku Klux Klan inspired antisemitism, not a single southern Democrat voted against Brandeis, although a few did not show up for the vote.

This vote reflected the power of Wilson. In 1910 there were 60 Republicans in the Senate. In 1912 Democrats took the Senate and the White House. In the off year election, with Wilson in office, Democrats picked up five more Senate seats. Democrats were not about to betray their president - the first of their party in two decades - who had helped them take the Senate. However, seven southern Democrats, including "Pitchfork" Ben Tillman of South Carolina, ducked the confirmation vote. They may have mistrusted Brandeis's liberalism and were perhaps uncomfortable supporting a Jewish nominee. But all the other southerners voted for Brandeis. This vote suggests the complexity of Southern politics. The first two Jewish U.S. senators had been from the South, 3,000 Jewish soldiers served in the Confederate army, Jefferson Davis had a Jew (Judah P. Benjamin) in his Confederate cabinet nearly a half century before Teddy Roosevelt put a Jew (Oscar Strauss) in a U.S. cabinet. Brandeis, who was born and raised in Kentucky, passed muster as had many other southern Jews.

The Brandeis confirmation did not end antisemitism in the US, especially in corporate board rooms, private clubs, elite universities, and among right wing groups. The 1924 immigration restrictions, passed by a Republican administration, kept Jews out of the country, but these restrictions also affected Italians, Poles, Greeks, Turks, and other eastern and southern Europeans, Middle Easterners, and Asians. A decade later, these restrictions would of course have a profound effect on Jews trying to escape Nazism on the eve of World War II.

Despite lingering private prejudice, the Brandeis confirmation signaled the beginning of the end to the use of antisemitism by political leaders to block the appointment of Jews to positions of great importance in American political life. In the 1930s both a Republican (Hoover) and a Democrat (FDR) sent Jews to the Supreme Court and Jews played an increasingly active role at the highest levels of American politics. Even ex-President Taft, who had ranted that Brandeis was "a socialist," "unscrupulous," "cunning," and "evil," came to value Brandeis as a colleague when Taft became Chief Justice in 1921.

In the face of public bigotry, the Senate rejected the legitimacy of antisemitism when considering a Supreme Court nominee in 1916. Brandeis was the leader of the Zionist movement in the United States in 1916, and continued as a Zionist leader after joining the Court. But, having played the "Jewish card" in the confirmation process - and failed to stop Brandeis - none of his former opponents suggested he should resign his position in the Zionist Organization of American after the confirmation.

Once on the Court the new Justice's powerful opinions and obvious wisdom made the early arguments about his temperament and ethnic traits seem absurd. He was often allied with Justice Oliver Wendell Holmes, Jr., the embodiment of America's traditional Protestant aristocracy. Brandeis himself became one of our greatest and most influential justices. Many of his opinions - on liberty, free speech, and fundamental fairness - are now accepted and honored.

Most importantly, since the Brandeis fight, no nominee to the Court has ever been attacked on the basis of religion, and at the national level Antisemitism is no longer part of America's political vocabulary. Thus, for all Americans the 100th anniversary of Justice Brandeis' nomination to the Supreme Court is a milestone worth recalling and celebrating. 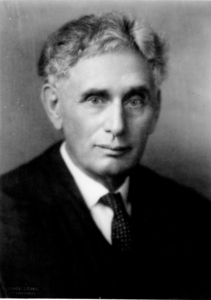