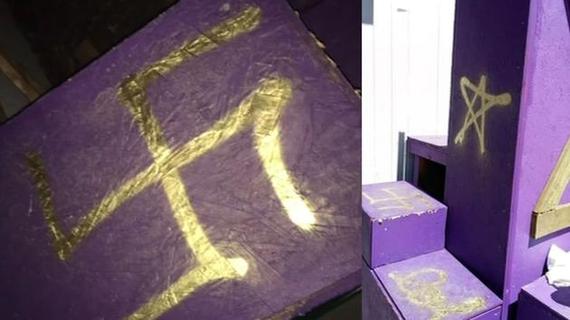 Three weeks ago I received a strange email. "Did I know," my friend wondered, "about the antisemitism brewing on the Stanford University campus?"

A young woman running for student senate had become subject to a barrage of hostility because of her religion and support for Israel. A campus newspaper reported that some student groups forbid its members from affiliating with any Jewish groups. Then, just a few days later, students awoke to swastikas spray-painted on a fraternity house.

The Stanford University which I attended between 1996 and 2000 was far different. Israel was celebrated. The president of the school frequently noted that Israel's then-Prime Minister, Ehud Barak, earned his graduate degree at Stanford.

Stanford has been influenced by the venomous antisemitism of groups calling for boycott, sanctions and divestment from Israel (BDS). These groups equate Israel with apartheid South Africa, arguing that only pulling investments and imposing sanctions on Israel will lead to peace.

The hatred encouraged by such groups threaten not only Jews. It threatens every student and minority. Here's why:

1. BDS invites racism: Supporters of divestment say Israel privileges Jewish residents at the expense of others. They point to Israel's Law of Return as an example of the country's racist character.

The Law of Return, passed at the state's founding in 1948, permits any Jew to immigrate and become a citizen of the state of Israel. The law is not racist but humanitarian.

To describe it as racist minimizes the meaning of racism. It was passed three years after the Holocaust. Tens of thousands of Jews lived in Displaced Persons camps in Europe. They had survived the Second World War and the Holocaust. Their homes in Europe were now occupied by others.

They could not return to the live amongst people who had tried to slaughter them. Unless they had relatives in the United States or another allied country, they had no place to live. Israel was their only possible home.

Today Israel also welcomes immigrants of all faiths. Hundreds of refugees from violence in Africa have come to Israel, as have refugees from Asia. Arabs also make up nearly twenty percent to the country's citizens.

2. BDS trivializes education: Many in the BDS movement have also promoted a boycott of Israeli scholars. They encourage both their universities and academic conference and associations to not invite Jewish professors in Israel to teach or join. This embargo means students and fellow scholars are not exposed to research and perspectives from Israel.

This climate of hostility also discourages students from expressing their points of view. The student running for the Senate at Stanford eliminated all references to Israel from her Facebook page. She felt afraid of sharing part of who she is.

A university where Jews can be demeaned is one where no one is safe. Antisemitism is not just an assault on Jews. It is an assault on all of us who take pride in who we are. As Jonathan Sacks, and this special report

puts it, "the hate that begins with Jews never ends with Jews."