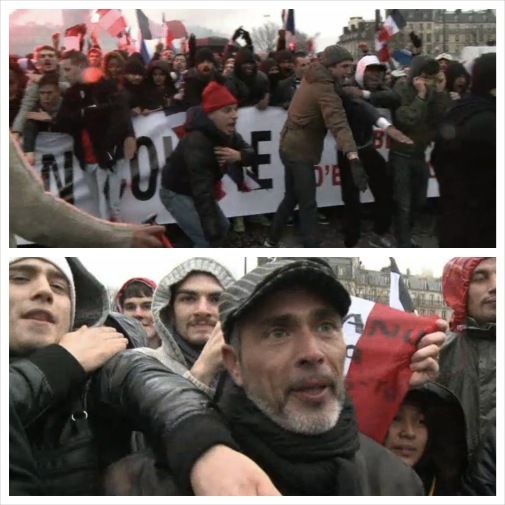 A Paris demonstration against Prime Minister Francois Hollande's economic policies on January 27 turned virulently anti-Semitic with shouts for Jews to leave France, less than a week after my daughter and I returned to Israel after a short trip to the French capital, making me feel like we got out of there not a moment too soon. But should I have been that surprised?

Ironically, during my first visit to the city in more than 30 years, I had only marveled at how Paris seemed to have improved since I lived there in 1980. Parisians seemed much friendlier and more open to foreigners. I'd remembered the people who worked in the booths of Paris Metro stations as surly: this time, one worker stepped out of his booth to help my daughter and I use the automated machine and offered us a Metro map before we even asked. On the street, people went out of their way to give us directions. And -- mon Dieu! -- they seemed to want to speak in English.

Carefree and oblivious, my daughter and I indulged in pastries, baguettes and cheese. At an outdoor market, we bought clementines and lychees.

"I love lychees," I heard a woman behind me say in Hebrew to her friend. I turned around, amused to hear Hebrew being spoken in the Parisian capital, another example of la nouvelle France. I asked the woman how her trip was.

"We can see that Jews aren't wanted here," she whispered. "All my family is getting ready to leave."

At the time, I viewed her family's panic as paranoia -- until I saw a video clip of Sunday's 17,000-strong demonstration in which marchers shouted against the Jews. (There are an estimated 500,000 Jews in France.) The demonstration proves once again that anti-Semitism has reignited in France with a vengeance. France's 1,500,000 Muslim community, rife with anti-Israel sentiment, stokes deeply-rooted French anti-Semitism, threatening a powerful conflagration. As historian Daniel Jonah Goldhagen writes, anti-Semitism in Europe has always been a "binding force, the common hatred of European culture that even adversary peoples and groups shared."

Naïve moi. Really, I shouldn't have been all that surprised. It's impossible to overstate how entrenched anti-Semitism is in French society, a fact I often tried to minimize or overlook. When I'd first come to Paris in a student exchange program in 1977, I'd requested lodging with a Jewish family. I thought it would be easier for me because of my religious dietary restrictions and beliefs. When I was placed with a family named Schwartz, I had to laugh. I'd left New York and come all the way to Paris to live with the Schwartzes!

But les Schwartz, originally from Alsace, were pious Catholics, and not long after my arrival, Madame Schwarz sat me down and told me in no uncertain terms that because I didn't believe in Jesus, I was condemned to go to Hell.

At first, I dismissed her attitude as due to her right-wing, provincial background, and I sought refuge among left-wing intellectuals. However, they were equally virulent in their anti-Semitism but hid it behind what they deemed as their rational, secular values, powerful French nationalism, and their insistence that the doctrine of "laicité," the absence of religion in government, protected Jews in France. Still, one man told me, "You Jews cause people to hate you by insisting on being different," while at the same time he applauded identity movements among other religious and ethnic groups. Another said I should be ashamed to admit I was une juive, a Jew, pronouncing the word as if it was sinister and humiliating. Still others aligned themselves with Holocaust denier Robert Faurisson, a revisionist who has tried to Jew-wash Hitler's genocidal policies.

Moreover, France is boiling with a repackaged anti-Semitism branding itself as hip, anti-authoritarian and playful. This is manifested by the quenelle (which, in French, means a fish dumpling), created by French comedian Dieudonné M'bala M'bala who has called Judaism "a fraud." People have been photographed doing the gesture -- a shorthand version of the Nazi salute, in which one's hand is on the shoulder while the other hand points stiffly down to the ground--in front of the gates of Auschwitz and next to Israeli soldiers. The French Government has banned Dieudonné's latest show, citing his incitement to hatred and racial discrimination, but his supporters defend his right to free speech (and free gestures). Dieudonné's popularity is a disquieting phenomenon, and observers worry that the French might overlook other manifestations of anti-Semitism to avoid stoking more anti-French unrest among the Muslim community.