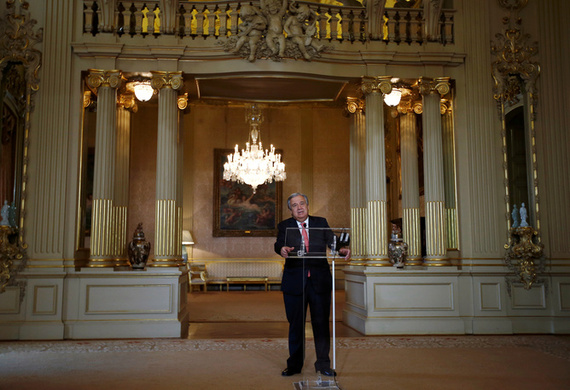 In recommending António Guterres as the ninth secretary general of the United Nations, the Security Council made many people unhappy. Much has been made of the fact that Guterres is the latest in a long string of male secretaries general, and is also from a wealthy Western European country.

But the Security Council has promoted a leader who is well-connected at the executive level, deeply experienced within UN structures, and holds a wealth of experience from working with nongovernmental organisations worldwide.

Guterres served as the prime minister of Portugal, the EU's southwestern-most state, from 1995 to 2002. He also led the UN's refugee agency for a decade from 2005 to 2015. His experience as a European head of state spanned the years of the Yugoslav wars of succession, and the 1995 EU enlargements, when three new states were added, and 2004 when the union grew by another ten.

As high commissioner for refugees, Guterres dealt with humanitarian issues related to migration from sub-Saharan Africa, as well as between Asia and Africa. Serious work on refugee questions, which concern human security across all generations and all continents, demanded he work with rescue committees, climate scientists, Doctors Without Borders, the International Organisation for Migration and many other civic organisations. He had to find out information from those on the ground, as little existed elsewhere.

Antonio Guterres of @refugees came to #Serbia. We told him how sick & miserable the long journey makes our patients. pic.twitter.com/7gn8wabnWb

This job offered Guterres not as many conversations in the halls of the Consilium building in Brussels, or the kind of welcome to world capitals as he had in his previous role, but demanded an approach akin to that of an investigator. It is safe to suggest that Guterres must know the world we live in today more globally and more intimately than many other former ministers or executives.

Guterres's duty at the UN was to demand that refugees be afforded a place in this world - a job that took him across the globe to face governments who were closing borders. These were tasks he carried out with a level of integrity and independence that was recognised sometimes even in a popular press that seldom pays attention to the UN.

Even if an election of a Mediterranean man came as a surprise and a disappointment to many, given that the seat was supposed to be earmarked for an Eastern European woman, perhaps it should not be.

Refugee questions have risen to the top of the European and United States foreign policy agendas in the course of the Mediterranean refugee crises. Migration is not new, and there are many reasons behind migration flows, including climate change, the war in Syria and elsewhere, political unrest and global inequality.

Perhaps what the world needs now is an expert with ground-up knowledge of global politics with a good ear in the capitals of Europe, the continent which many wish to migrate to the most.

The UN has promoted someone from within its structures before, in the case of Kofi Annan, in 1997. Annan worked as a deputy and subsequently the head of the UN's peacekeeping operation, a job to which he was appointed by a another Mediterranean man, Boutros Boutros-Ghali, in 1982.

Guterres knows the UN's own structures from within and does not have to get to know the quirks of the secretariat building's corridor politics by trial and error. This will help him pursue his agenda from the beginning.

His previous duties have concerned the most current questions of globalism. He speaks many of the official languages of the European Union - and has experience as a head of state negotiating with Brussels. Perhaps he is therefore also uniquely qualified to translate and explain global politics to the European Union's various institutions and to other Western leaders as well.

Guterres may not be the perfect secretary general for 2016, but he was the right candidate for the job in today's unbounded world.