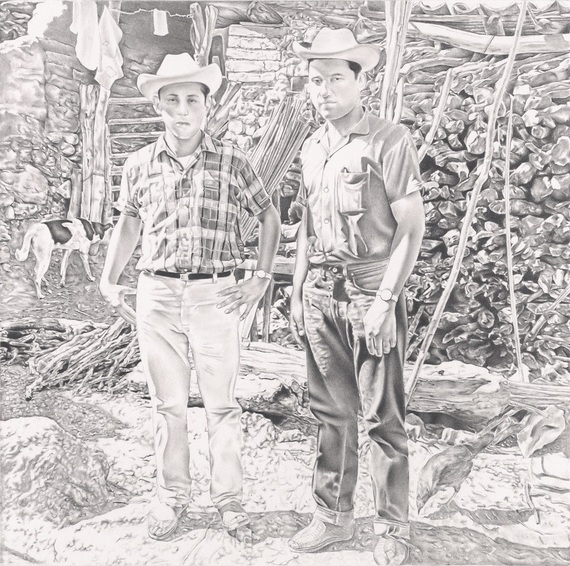 It's probably a good thing Antonio Pelayo didn't go to art school. They may well have erased the classical sincerity and instinct for personal, emotional narrative right out of him. And risking the supplantation of his devotion to story and craft with self-conscious overexposure to conceptualism and irony would have been a real shame. Instead, Pelayo made his own way in art as in life, pursuing a homebrewed mix of high-folk traditionalism, paradigmatic skill, and eccentric realism, serving a style of majestic, intimate portraiture that has not only remained intact, but flourished. 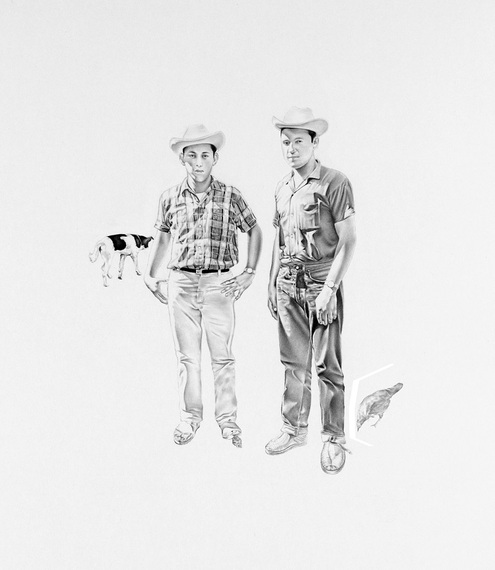 Pelayo was born in Glendale, but primarily raised in a small Mexican village -- a hybrid, or as he has said, broken childhood that was a major influence on his subject matter. He uses old family photos as the basis for many of his images, leaving out their background or setting and rendering only the figure hovering in a sea of empty white paper space. "It's as though my paintings are still looking for that one home," says Pelayo; the one that eluded him. "With the subject all alone and without a sense of place, the drawings ask, Where do I belong?" These days, some 20 years on, Pelayo definitely knows where he belongs. Yet the pregnant silence of that compositional emptiness continues to characterize his work and has in fact become something of his signature. It could be that now he's instead asking you, the viewer, to think about where you belong. 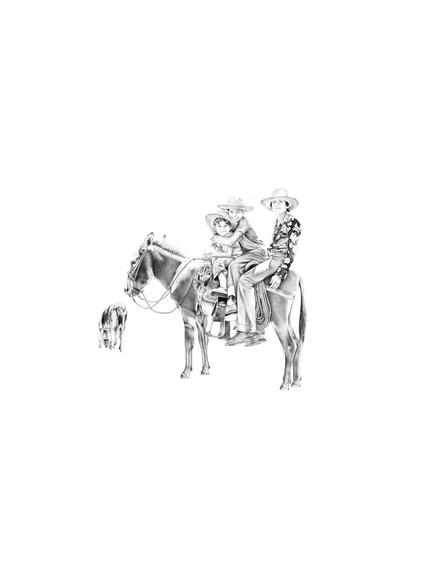 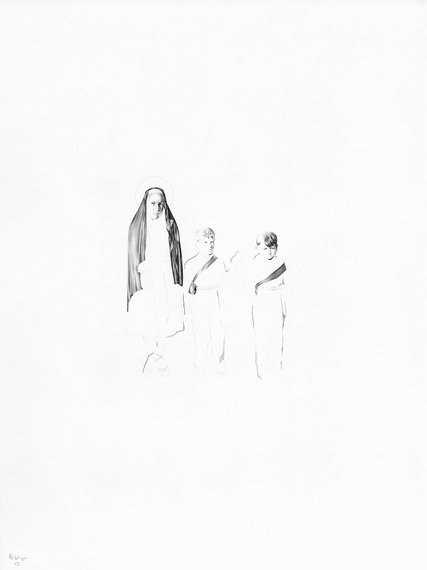 As a teenager in 1993, Pelayo took a temp job at Disney Studios and in a story fit for an animated feature of its own, went on to be permanently hired in the legendary Ink & Paint Department. He is still there, steadily promoted until he became the last inker left in a shrinking segment of post-digital studio operations. Needless to say, he's something of a legend. As part of a very small team that hand-renders animation cels, replicating the original process by which films were once produced, he creates newly executed images in the same way they did generations ago, except they don't make films out of them anymore. What Pelayo does at Disney is arcane and all but obsolete, but is also based on a beloved and deeply rooted tradition combining craftsmanship, pop culture, and magic-tinged nostalgia -- just like his own original work. In terms of artistic sensibility, Pelayo was already "there" when they found him. His business card still reads simply "graphic artist." 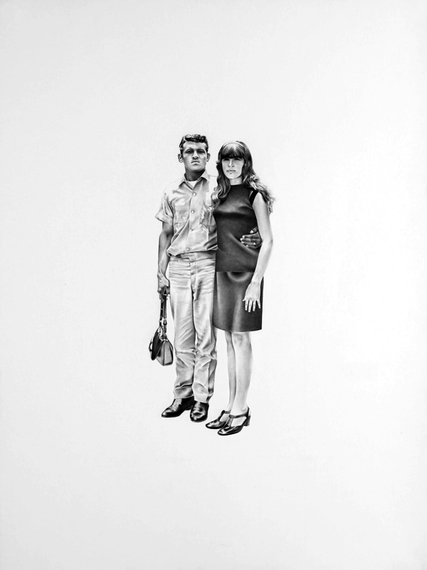 In the mysterious, off-kilter paintings and drawings based on the aforementioned family photographs, Pelayo's stream of people and moments half-remembered from youth or retold from the days before his time include vintage portraits of now-matronly women when they were young, boys in work clothes with playtime on their minds, and obscure yet important occasions (birthdays, anniversaries, communions, county fairs) commemorated with earnest formality. All these figures seem caught at various paradoxical points between emerging and dissolving, as the artist not only decontextualizes them by omitting the scenery and backdrops, but also by leaving the figures themselves partially unfinished. Both the avant-garde poetics of the way pictorial space is organized, with figures landing around the edges, leaving arctic expanses barely punctuated by a necktie here, half a profile there; and the technique of unresolution combine to directly evoke the fading photos he used as sources. Formally, and, yes, conceptually, this technique calls attention to the mechanics of the drawing process itself, in a tautological loop that only beckons the viewer deeper into the picture. As far as meaning goes, Pelayo has already said a great deal regarding the brokenness of his past, and the fractured way in which memory works in general. Not for nothing, but animation cels, at least at the point where Pelayo makes them, also tend to feature deracinated single figures, whose colors and settings are added by a separate hand. 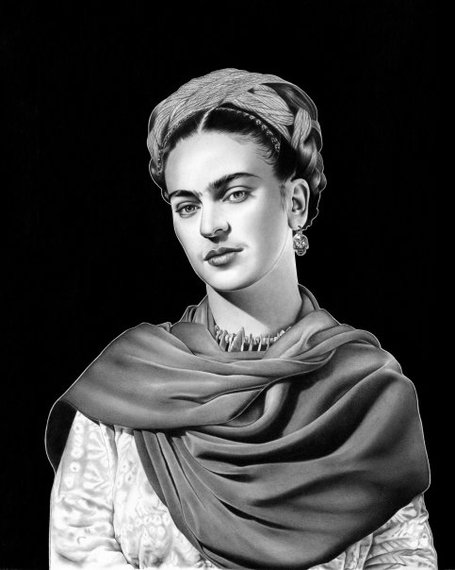 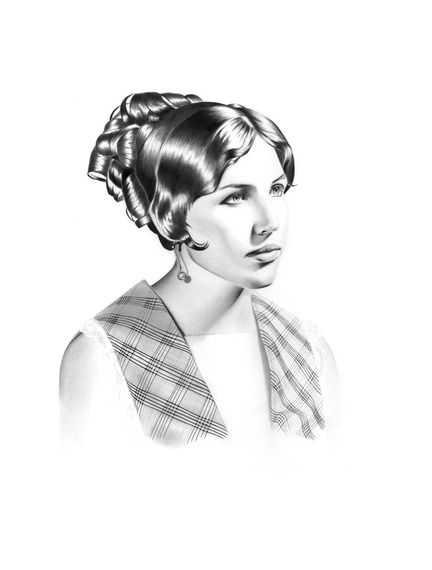 There's a whole other side of what Pelayo does that is definitely not based on family pictures; a world of color and sex, fantasy and humor, imagination and popular culture that has been just as formative in his personal and creative style over the years. Again working from photographs, and again, with no backgrounds (though in these cases that's a convention of contemporary photography rather than an allegorical choice on his part), Pelayo renders portraits of celebrities and cultural icons -- artists, musicians, historical figures -- with an exacting, almost impossible rectitude and deliberation. Frida Kahlo, Bruce Lee, Tupac Shakur, Biggie Smalls, Che Guevara, James Dean, Albert Einstein, Mohammed Ali, Humphrey Bogart (smoking, and by the way there's a lot of smoking in the Old Hollywood pictures Pelayo favors), Marilyn Monroe, Michael Jordan... It's not hard to see that aside from intriguing faces on which to practice his skill, for a young man in search of a home, the extended family of American pop culture would be just as formative as any village's most sagacious uncle. 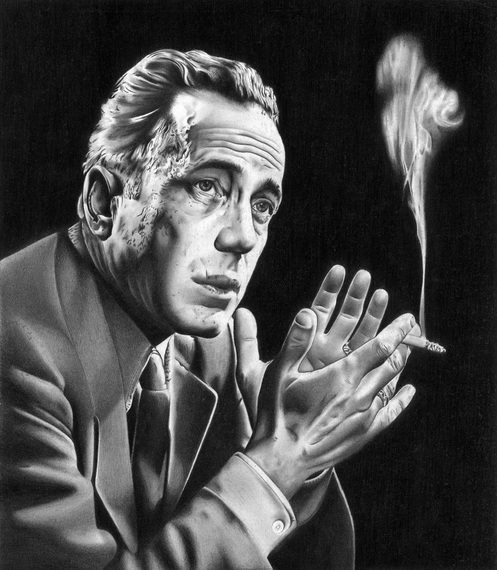 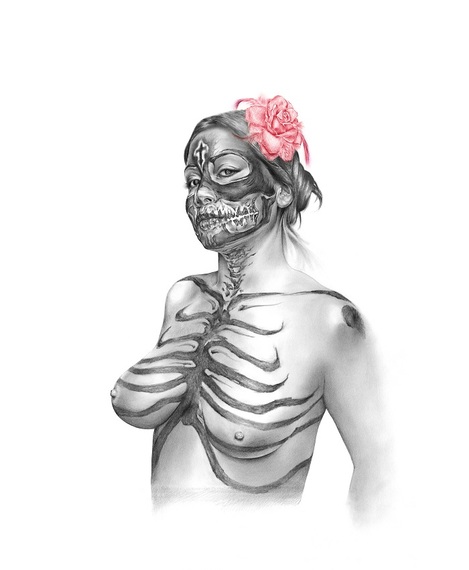 Antonio Pelayo: Lost in Your Eyes 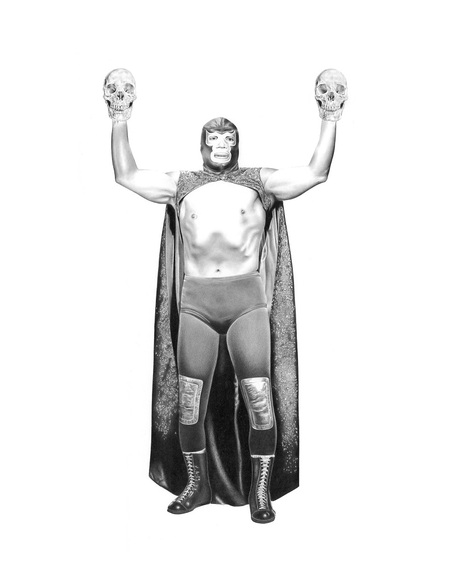 At some point the characters from Disney began incursions into the realm of his private practice as well. After twenty years, those characters must feel like extended family, too. There's a Lucha Libre series, for example, in which elements like a certain mouse's iconic glove are inserted into compositions of skulls, blood, and bravado. Pelayo is actively experimenting with such parallax overlays, as though formally introducing the halves of his life to one another, closing the circle in both the pictorial and metaphorical senses -- grounding his vision within the stories of both his family and the cultural foundations we all share. He's home. 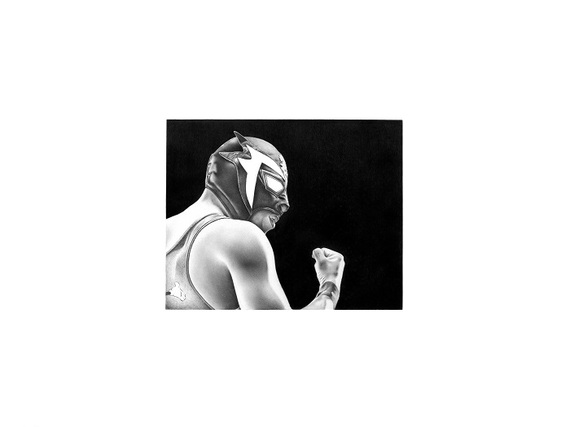 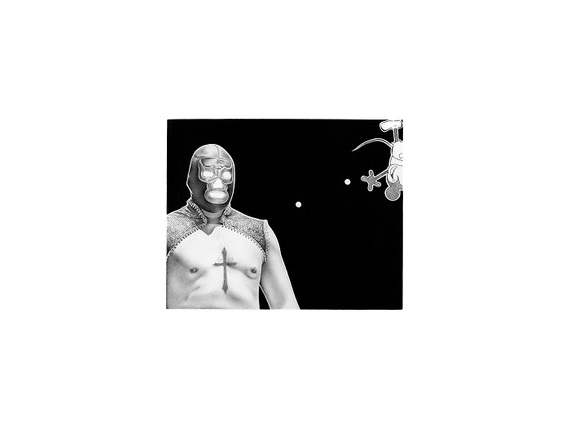 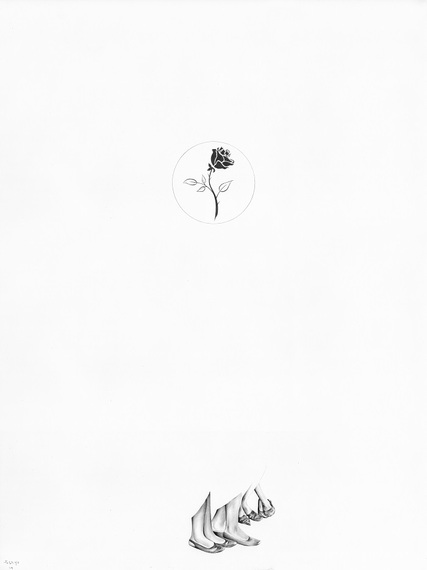 Pelayo will be featured in the upcoming exhibition ILLUSTRATIVE MINDS at PROJECT GALLERY in Chinatown, opening on May 28.